By Megan Brenan of Gallup,

Similar percentages of Democrats (75%) and Republicans (79%) think only their candidate is suitable, while a 37% plurality of independents do not think either would be a good candidate and nearly equal percentages say only Biden or only Trump would be.

These readings, from a July 30-Aug. 12 poll, mark the fourth U.S. presidential election of the five that have occurred since 2004 for which Gallup has asked this question. The current percentage saying neither candidate would make a good president is the highest on record.

In 2004 and 2012, when incumbents were also running, 11% and 17%, respectively, lacked faith in both candidates’ ability to be a good president. In 2008, an open-race year, 19% said the same — however, Gallup did not track this measure in 2016 when both non-incumbent candidates, Trump and Hillary Clinton, were historically unpopular.

Republicans More Pleased Than Democrats With Their Party’s Candidate

The new poll also asked people who identify with either of the two major parties if they are generally pleased with the selection of their party’s nominee. Republicans and Republican-leaning independents are more likely than Democrats and Democratic-leaning independents to say they are generally pleased with their party’s candidate.

About three-quarters of Republicans/leaners are generally pleased with Trump, while 25% wish someone else were the nominee. In contrast, 48% of Democrats/leaners are pleased with Biden and 52% would prefer another candidate.

While Gallup has not asked this question in all recent presidential election years, this imbalance in the views of partisans follows a pattern from past elections when an incumbent was running. This can most likely be attributed to the fact that those whose party had a nominating contest may have supported a candidate other than the eventual party nominee and are not yet fully on board with the nominee. In the past, this has often changed after the winner accepts the nomination at the party’s convention, as Biden will — virtually — next week.

Satisfaction with an incumbent has not always translated to victory, as seen in 1992; Democrats were about as pleased with Clinton as they are with Biden today, and Clinton went on to defeat Bush that November. The Clinton reading was taken before the Democratic convention — which, along with Ross Perot’s departure from the campaign, led to a Clinton surge in the polls after which he never trailed in pre-election polls.

Further evidence of an incumbent advantage on the measure comes in comparing Trump’s current standing to what it was in 2016. In August of that year, after he had accepted his party’s nomination, less than half of Republicans/leaners said they were pleased he was the nominee.

Biden’s current standing is slightly worse than it was for Hillary Clinton in 2016 after the Democratic convention (56%).

This year, Democrats/leaners who say they would have preferred another nominee are slightly more likely to be men (56%) than women (49%). Those younger than 35 are the least satisfied with Biden as their nominee — 82% would rather have someone else.

Although Republicans are more pleased with Trump’s nomination than Democrats are with Biden’s, Biden holds an edge in candidate favorable ratings among all Americans. Currently, 47% of Americans have a favorable opinion of Biden, compared with 42% for Trump. Trump’s rating is down from 49% the last time Gallup asked this question in April, while Biden’s is essentially unchanged from 45%.

While Trump’s favorable rating has not reached 50% since 2005 — long before he became a Republican politician — Biden has been viewed favorably by a majority of U.S. adults as recently as April 2019. 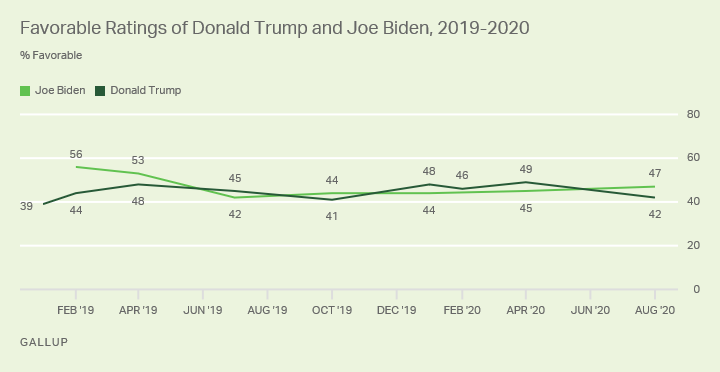 Republicans and Democrats view their party’s presidential candidate nearly as favorably — 91% of Republicans hold a favorable view of Trump, while Biden’s favorable rating is 87% among Democrats. However, among independents, favorability is far lower and about equal for both Trump (39%) and Biden (41%).

Although a quarter of Americans overall do not think either Trump or Biden would be a good president, about seven in 10 Democrats and Republicans alike think their party’s candidate would be. Yet, Republicans are more likely than Democrats to say they are pleased with their party’s nominee.

Neither of these measures has been predictive of election outcomes in the past — likely in part because partisans’ attitudes tend to change closer to Election Day, with each group falling in line behind their candidate. These pre-convention ratings may simply provide some perspective on the importance of conventions for rallying the partisan base.

Historically, the more important measure is what Americans as a whole think of the candidates, as reflected in their favorable ratings. In general, since 1992, the candidate who is rated more favorably by Americans has won the election. The 2016 election was a notable exception, when Hillary Clinton was viewed more favorably than Trump but still lost the election. In addition to favorability, in incumbent election years, presidential job approval ratings are also strong predictors of reelection.

EU Blinks Already: In The Face Of A No-Deal Brexit, The EU Finds A Unicorn

Mauldin: The Yield Curve Inverted Months Earlier Than Most Think