With Trump expected to make a “major therapeutic announcement” at 530pm “sharp”, and tweeting that the “important White House news conference” will be “very good news”…

… speculation is rampant what Trump will announce.

One clue comes from the Financial Times which moments ago reported that the Trump administration is “considering the bypassing normal US regulatory standards to fast-track an experimental coronavirus vaccine from the UK for use in America ahead of the presidential election.”

The FT is referring to a covid vaccine trial being conducted by AstraZeneca, and whose fast-tracking “would involve the US Food and Drug Administration awarding ‘emergency use authorisation’ (EUA) in October to a vaccine being developed in a partnership between AstraZeneca and Oxford university, based on the results from a relatively small UK study if it is successful, the people said.”

One problem is that accelerating the AZN study would prompt concerns that it does not comply with US regulations, and that its safety would not have tested on a sufficient large group of people:

The AstraZeneca study has enrolled 10,000 volunteers, whereas the US government’s scientific agencies have said that a vaccine would need to be studied in 30,000 people to pass the threshold for authorisation. AstraZeneca is also conducting a larger study with 30,000 volunteers, although the results from that will come after the smaller trial.

Trump is said to be eager to rush out a vaccine before the elections to allow him “to claim he has turned the tide” on the virus, especially as Democratic criticism of his handling of the pandemic has emerged as one of the main presidential election criticisms of his administration. In his convention speech on Thursday night, Joe Biden said that the US response to the virus was the “worst performance of any nation.”

According to the FT, Mark Meadows, Trump’s chief of staff, and Steven Mnuchin, Treasury secretary, have told top Democrats that the administration was considering fast-tracking a vaccine, according to one person briefed on a July 30 meeting the pair held with Nancy Pelosi. Meadows said in the meeting that “there could be emergency authorization, possibly for the AstraZeneca vaccine, in September. Mr Mnuchin added that the administration expected an EUA for a vaccine before full approval, said the person, who added that Ms Pelosi warned that there should be “no cutting corners” in the vaccine approval process.”

That said, a spokesperson for the Treasury secretary was quick to deny this, saying “Secretary Mnuchin did not make any comments regarding AstraZeneca, nor is he familiar with the specifics of the AstraZeneca vaccine candidate. He is also not aware of any plans the FDA may have regarding any emergency use authorisation for any potential vaccine, beyond what he has heard publicly stated. The secretary believes, and has always believed, that any decision on vaccine candidates and any possible EUA is up to the FDA.”

Also casting doubt on speculation that Trump will announce the fast-tracking of a vaccine is Michael Caputo, a spokesperson for the US health and human services department (which contains the FDA) who said any claim that the administration would issue an EUA before the election was “absolutely false.” Echoing Bank of America’s latest timeline, Caputo said the administration was hopeful that a vaccine would be developed by the first quarter of 2021

“We have always been working towards that goal. I’ve never been told at any point in time that that goal has changed,” he said. “Talk of an October surprise is a lurid resistance fantasy. Irresponsible talk of an unsafe or ineffective vaccine being approved for public use is designed to undermine the president’s coronavirus response.”

A spokesperson for AstraZeneca told the FT that it had “not discussed emergency use authorisation with the US government” and that it “would be premature to speculate on that possibility.”

Of course, it wouldn’t be the first time that Trump has “surprised” his own staffers. In this case, however, an unexpected fast-tracking of a potential covid vaccine will likely lead to another round of resignations (especially since there appears to be a lot of political backroom dealing seeking to promote Gilead’s Remdesivir as the vaccine of choice although doubts have been case after it emerged that Remdesivir may only provide modest benefit against ‘moderate’ COVID-19). As the FT notes, if the FDA, which is led by commissioner Stephen Hahn, were to grant emergency approval to the AstraZeneca vaccine based on the Oxford study, “it could provoke a string of resignations from the agency.”

Earlier this week, Peter Marks, director of the FDA’s Center for Biologics Evaluation and Research — which is responsible for assessing the vaccines — told Reuters that he would resign if the agency were to approve a jab before definitive data showing it was safe and effective.

“I could not stand by and see something that was unsafe or ineffective that was being put through,” Dr Marks said. “You have to decide where your red line is, and that’s my red line.”

He went on: “I would feel obligated [to resign] because in doing so, I would indicate to the American public that there’s something wrong.”

An FT source siad that if Dr Marks were to quit, other scientists in his division of FDA would follow suit.

But while a round of FDA departures may not bother Trump, the lack of uptake of the vaccine by a skeptical public will surely be a major concern.

For one thing, as the FT notes, the relatively small UK trial was not designed to produce sufficient data of the kind that would be required for emergency authorisation in the US. US drugmakers Moderna and Pfizer, which are also trialling vaccines, both plan to enrol 30,000 participants in Phase III studies they started in July. Moderna said it would complete enrollment by the end of September, while Pfizer has said it has already enrolled 11,000.

An FT source briefed on the plan said: “I don’t see a way forward for [AstraZeneca],” based on the 10,000-person trial. “They’re not going to get there. They won’t have the clinical end points.”

Paul Offit, a vaccine expert at the Children’s Hospital of Philadelphia, echoed the skepticism saying it would be “very disappointing” if the Trump administration were preparing such a plan before it had even seen the data because it risked “politicising the science”, although that particular horse has long ago left the barn. He added that even if the study were successful, a 10,000-person trial would not be large enough to rule out rarer side effects. “The job of the FDA is to protect the American public if they see these data as inadequate.”

The FDA’s Hahn already faced criticism earlier this year after the FDA granted emergency approval for hydroxychloroquine – an unproven drug repeatedly touted by Mr Trump – before reversing its decision when multiple studies showed the drug was not an effective treatment for coronavirus.

Others have also chimed in on the importance of following proper procedure:

In June, Francis Collins, director of the National Institutes of Health, told CNN: “Each vaccine needs to be tested on about 30,000 volunteers. We don’t believe that we have enough power in the analysis, to be able to document the vaccine works unless you get to roughly that number.”

Robert Redfield, head of the Centers for Disease Control and Infection, told the FT on Friday: “Although we have talked about doing this at ‘warp speed’, it is not through any cuts in our efforts for vaccine safety or scientific integrity. I am confident there will be all the rigour we have always had for developing vaccines for human requirements.”

The decision over whether to fast-track a so-far unproven vaccine also involves none other than Anthony Fauci, with the FT concluding that the administration’s exploration of ways to circumvent normal procedures “had prompted infighting among the government’s top scientists. Anthony Fauci, director of the National Institute of Allergy and Infectious Diseases, and Dr Collins are stressing the importance of scientific rigour whereas Moncef Slaoui, the White House’s vaccine tsar, wants to forge ahead, the person said.”

Judging by the tone of Trump’s tweet, those pushing for “forging ahead” have gotten the upper hand.

But even if Trump decides to pursue a fast-tracking, he will face other challenges, not the lest of which is widespread skepticism within the US – and especially among his own core base – toward a vaccine, any vaccine.

As we reported earlier quoting from Bank of America, “even in the best of times, many people refuse to get a flu shot. Americans seem particularly skeptical about public health policy. If masks are unacceptable, what about shots of a brand new drug? A RIWI survey in June and July found big differences across countries (Chart 1). Certainly we would expect the initial take-up to be slow. After all, there have been a lot of confusing public health messages.  Such caution is to some degree warranted, with the vaccines being rushed to market without knowledge of the long-term side effects.” 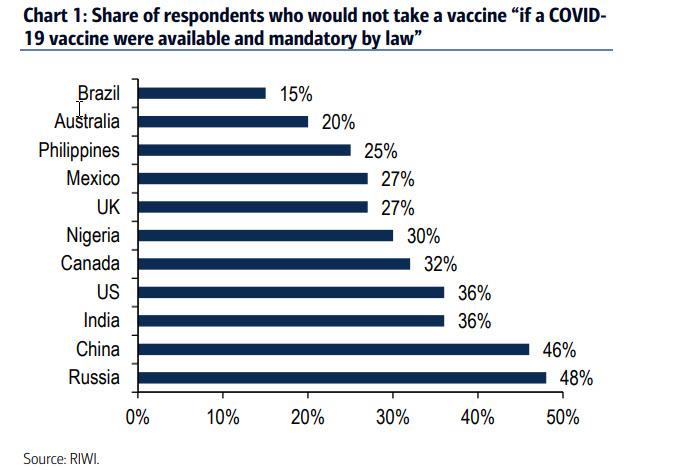 One final point, also from Bank of America: “It is also important to note that rolling out a vaccine will not immediately end all social distancing behavior. Some people will respond quickly as pent-up demand is released, taking that long-delayed vacation, for example. However, we assume the majority of people will re-engage slowly as they become more comfortable that the health risk is indeed gone. Some activities could take very long to fully recover.”

No, the American Republic Was Not Founded on Slavery

Should (Can) Fake News Be Regulated?

In Defense of Landlords