Readers may recall last week we outlined the dam of pent up mortgage delinquencies continued to crack, with the share of delinquent Federal Housing Administration’s loans hitting a record high in the second quarter.

With millions of Americans out of work due to the virus-induced recession, their personal income has become overly reliant on Trump stimulus checks, as we’ve outlined, a quarter of all personal income now comes from the government. 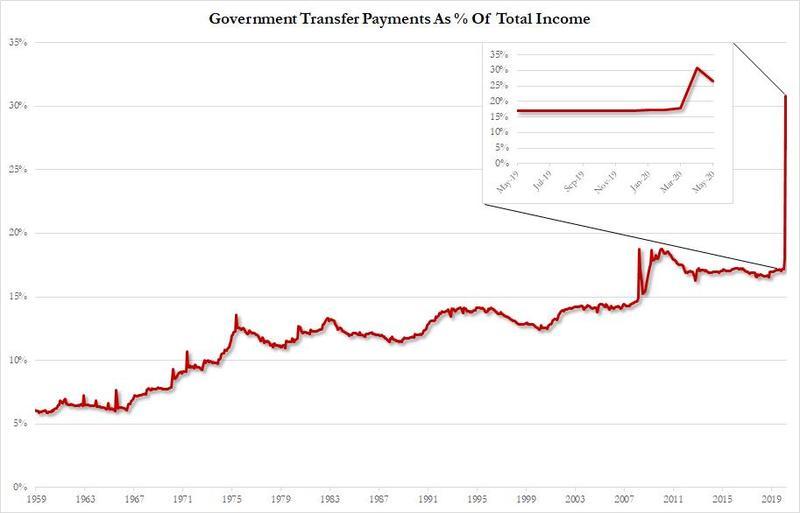 A fiscal cliff hit the economy on August 01, when the program to distribute stimulus checks to tens of millions of broke Americans ran out of funds. Even though President Trump signed an executive order to fund additional rounds of checks, only one state, as of August 21, has paid out new jobless benefits and paused evictions as stimulus talks in Washington have failed to materialize into a deal.

Leading up to the fiscal cliff in July, financial data firm Black Knight reported the number of serious mortgage delinquencies catapulted to a ten-year high.

The number of homes with mortgage payments past due by 90 days or more rose by 376,000 in July to a total of 2.25 million. Serious mortgage delinquencies have jumped by 1.8 million since July 2019, a decade high, not seen since the last financial crisis.

Cracks in the dam of pent up mortgage delinquencies are becoming larger as the presidential election nears. Still, millions of folks are unable to service mortgages, remain protected from foreclosure by the federal forbearance program, in which borrowers with pandemic-related hardships can delay payments for as much as a year without penalty. What happens when the program finally ends, and all the payments that were deferred come due could result in housing market weakness.

The prospect of a tidal wave of foreclosures could be ahead as the mortgage industry and government’s policies were merely short-term measures to push a housing crisis off until after the election.

If homeowners still can’t find jobs as the labor market recovery falters, then their ability to service future mortgage becomes impossible. At the same time, deep economic scarring is being realized, resulting in the shape of the economic recovery transforming from a “V” to a “Nike Swoosh.”

Even with part of the housing market booming, that is primarily due to folks ditching metro areas for suburbia and ultra-low mortgage rates pulling demand forward in such a massive way that today’s boom will lead to much lower activity in the future.

Think about it, millions of folks still can’t pay their mortgage, and many of them still can’t find jobs. But, of course, none of that matters as President Trump distracts the sheep and points to how well the Nasdaq is doing.

Why California Has the Highest Gasoline and Diesel Prices in America