By now, conservatives across the US understand that most of the violence being caused in the aftermath of these police shootings isn’t organized by locals, but rather by bands of traveling activists who live in nearby metropolises. In the Midwest, that’s Chicago, a hub of racial activism since Bernie Sanders went to school there back in the 1960s. Some might be coming from Milwaukee as well.

Just like we saw in New York City, many of the looters and people there committing acts of vandalism and violence are drawn from Chicago and other nearby areas.

On Tuesday’s broadcast of the Fox News Channel’s “The Story,” Rep. Bryan Steil (R-WI) stated that local law enforcement in Kenosha, WI are “very concerned large numbers of people are coming up from Chicago and trying to disrupt the public safety in the community of Kenosha,” in the wake of the shooting of Jacob Blake.

Meanwhile, left-wing pundits are already trying to frame the shooting as an act of white supremacist violence even though both the shooter and his victims were armed, and white. 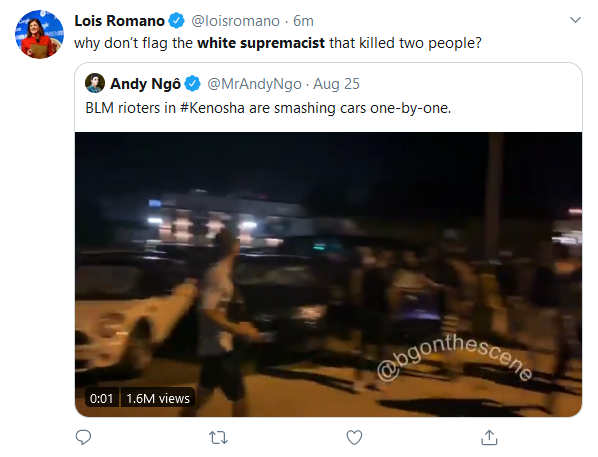 Of course, nobody wants to mention the fact that Wisconsin Gov Tony Evers turned down the White House’s latest offer of assistance.

White House Chief of Staff Mark Meadows blasted Evers for his decision to turn down federal help and instead Meadows said that earlier in the day, he received a call from some members of the Wisconsin congressional delegation “really just pleading for help, said that the local sheriff and mayor and police chief need some additional assistance. So, I got on the phone right away and called the governor and offered assistance in the form of additional National Guard help. As you know, they’re going to have some additional National Guard there tonight. But you’ve got to, as a governor, and as elected officials, you’ve got to either ignore the problem — which, a lot of liberal governors are doing exactly that, they’re ignoring the problem — or you have to deal with it. … The president was on the phone with the governor today as well. We have National Guard standing by that, if the general for the National Guard needs additional help, we’re there to do it. But today, that request was denied by the governor.”

Some readers might wonder what causes some police shootings to evolve into massive “protest” movements, and others to be mostly ignored, or at least relatively much more mild? Kenosha is located right off the main highway that connects Chicago to Milwaukee, making it easily accessible to radical elements who tend to cluster in larger cities (in the second and third tier, if they don’t have rich parents who can help them afford an apartment in Brooklyn).

“This isn’t the Kenosha that I know. And if you look at where Kenosha is located, it’s along the lake between Milwaukee and Chicago. I’m very concerned, and I’ve heard from local law enforcement that they’re very concerned large numbers of people are coming up from Chicago and trying to disrupt the public safety in the community of Kenosha, all the more reason that we need to make sure that our community has the resources to be able to protect people’s lives, their personal livelihood, and their families, now.”

And after the damage is done, the suspects can zip right on back.

Before we go, here’s another photo that probably won’t make it on to MSNBC on Wednesday.

Ralph Lazo, the Man Who Voluntarily Lived in an Internment Camp