Three months ago, Kamala Harris asked her 3.7 million Twitter followers (now 5.4 million) to contribute to the Minnesota Freedom Fund, whose mission is to ‘help post bail for those protesting on the ground in Minnesota.’ 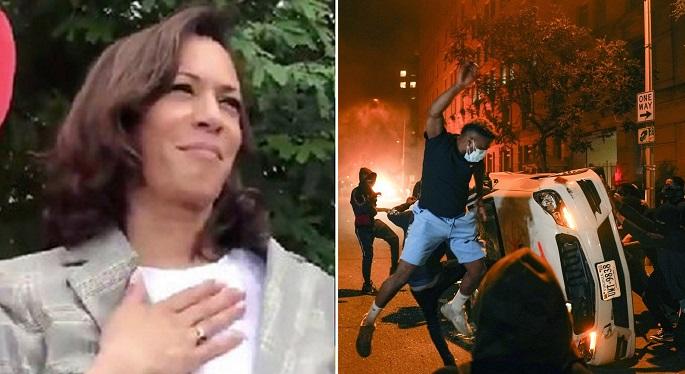 If you’re able to, chip in now to the @MNFreedomFund to help post bail for those protesting on the ground in Minnesota. https://t.co/t8LXowKIbw

Yet, as Fox 9 News in Minneapolis notes, the MFF has bailed out violent criminals who were rioting in Minneapolis following the death of George Floyd, a black man who had a ‘fatal level‘ of fentanyl in his system when he died in police custody, after a police officer knelt on his neck for over eight minutes during a stop.

Fox 9 reports (via The Federalist):

Among those bailed out by the Minnesota Freedom Fund (MFF) is a suspect who shot at police, a woman accused of killing a friend, and a twice convicted sex offender, according to court records reviewed by the FOX 9 Investigators.

According to attempted murder charges, Jaleel Stallings shot at members of a SWAT Team during the riots in May. Police recovered a modified pistol that looks like an AK-47. MFF paid $75,000 in cash to get Stallings out of jail.

Darnika Floyd is charged with second degree murder, for stabbing a friend to death. MFF paid $100,000 cash for her release.

Seriously? If Harris suddenly wind up as President of the United States, will she promote initiatives with a similar lack of oversight – or even worse, which are actively working to put violent offenders back on the streets?

The Federalist‘s David Marcus sums it up brilliantly:

Harris was so eager to be on the rioters’ team that she literally raised money for them in the hopes that they could be released and foster further mayhem.

That on its own would be bad enough. But the fact that she is now attempting to pretend she was against all of this violence, and looting, and arson, and destruction from the get go is an insulting joke. Did Harris really think that peaceful protesters obeying the rules were the ones arrested in Minneapolis? Of course she didn’t. She just assumed that justifying the unrest would help Democrats’ political chances. Now that this has been shown to be false, she is trying to change her position. It’s way too late for that.

Now, Harris has to own this – which is the first thing Vice President Pence should ask her about when they debate…

California Gov Lays Out 6 Conditions That Must Be Met Before Economy Reopens: Live Updates

Boeing Engineer On Heroin Robbed 30 Banks In Just One Year