This Was The Best Performing Asset In August And 2020 YTD

This Was The Best Performing Asset In August And 2020 YTD

August is traditionally a slumbering, vacation-heavy month, with low market volumes and little price action. Of course, the month that just passed was anything but with the S&P recording its best performance since 1986 on the back of an unprecedented meltup in a handful of tech stocks.

Indeed, unlike 2011 and 2015 when August was a “troublesome month for risk assets,” this year saw a continued recovery from the lows reached back in March, with 25 of the 38 non-currency assets in the Deustche Bank asset sample having a positive return over the month. Furthermore, the month marks another milestone, since for the first time this year, more than half the sample is now positive on a YTD basis as well, with 21/38 non-currency assets having moved higher.

As Deutsche Bank’s Henry Allen writes, in terms of the highlights it wasn’t tech but silver that was the top performing asset in August for the 2nd month in a row, thanks to a +15.4% increase. That move cements its existing YTD lead, having now risen by +57.6% since the start of the year, in a move that outpaces even the NASDAQ. Matters weren’t so positive for gold though, as in spite of rising above $2,000/oz at the start of the month for the first time ever, the precious metal ended up losing ground to close -0.4% lower. Nevertheless, commodities generally performed strongly, with WTI (+5.8%), Brent crude (+4.6%) and copper  (+6.0%) all seeing solid advances, even though oil remains one of the worst performers on a YTD basis, with Brent (-31.4%) and WTI (-30.2%) still well below their pre-Covid levels.

Equities, of course, were another asset class that had a strong month, particularly in the US. The S&P 500 was up another +7.2% in total return terms, as the index climbed above the record high reached back in February. Meanwhile the price index, which now stands above the 3,500 mark, saw its best August performance (+7.0%) since 1986. The NASDAQ saw an even larger +9.7% advance over the month in total return terms, while in Europe the DAX also climbed +5.1%. The exception was the Brazilian Bovespa, which was the only equity index in our main sample to lose ground in August, with a -3.4% fall.

Meanwhile, after a stellar Q2 and early Q3, fixed income struggled in August as investors moved into riskier assets. In fact, gilts (-3.2%) were the second-worst monthly performer the entire sample in local currency terms, while Treasuries (-1.2%) and bunds (-1.2%) both lost ground as well. In line with this broader move into risk however, Italian BTPs (-0.3%) and Spanish bonds (-0.6%) outperformed relative to these core countries, and in credit HY outperformed IG in both Europe and the US.

Finally in FX, the dollar fell to a 2-year low in August (-1.3%) as it declined for the 5th consecutive month. The dollar’s weakness meant that the euro strengthened above $1.19 for the first time in over 2 years, while sterling rose +2.2% against the dollar. For the euro, that extends its YTD advance against the US dollar to +6.4%, but the renewed rise in the number of virus cases on the continent will come as a source of concern to investors looking forward into the final third of the year.

Visually, here are the best and worst performing assets in August… 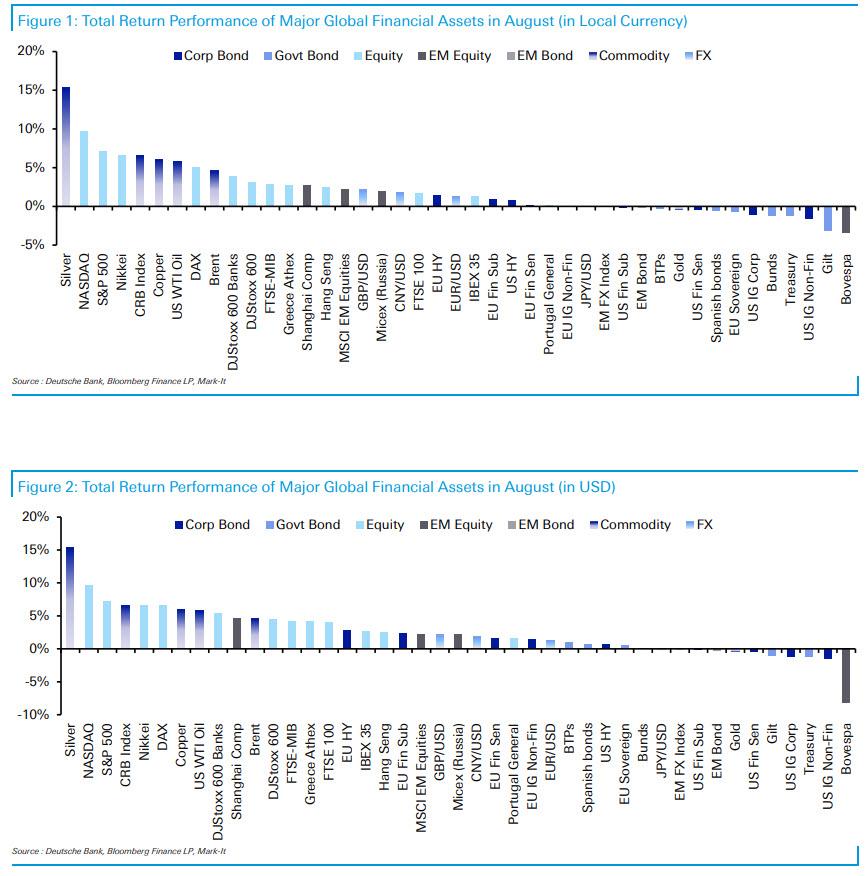 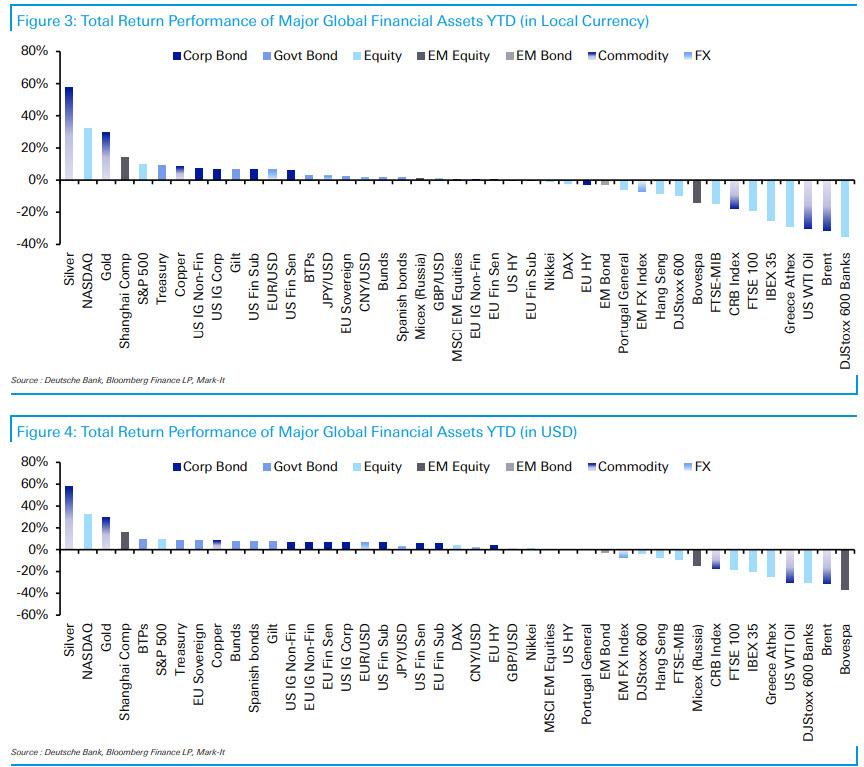 Dalai Lama: Europe Will Turn “Muslim Or African” If Migrants Not Returned “To Their Own Land”