Much has been said in recent days about the death of the Phillips Curve, which was officially cast into the funeral pyre last week when the Fed unveiled its new approach to monetary policy, which puts more emphasis on shortfalls in employment and less weight on the fear that low unemployment could spark higher inflation.

The WSJ also piled on, with the newspaper’s economic commentator Greg Ip writing that “the revamp of its monetary policy framework, the Federal Reserve has subtly but clearly shifted its priorities away from inflation to employment…. Central  banks  have  long  operated  on  the  assumption  that  there  is  a  trade-off  between employment and inflation. As the unemployment rate drops below some “natural” level, inflation starts to rise, a relationship dubbed the Phillips curve. That means unemployment could be  both  too  high  or  too  low.  The Fed in its old operating  principles thus sought to minimize “deviations” of unemployment from this natural level. In practice, this meant the Fed had to both estimate the natural rate and raise interest rates if actual unemployment threatened to fall below it. The new framework replaces “deviations” with “shortfalls,” implying  unemployment can be too high but never too low.”

And just to make sure that the relationship between unemployment and inflation is never again shown in an official Fed slideshow, last week Fed vice chair Richard Clarida delivered a remarkable speech in which he admitted that the Fed’s new Average Inflation Targeting framework, was “a robust evolution in the Federal Reserve’s policy framework and, to me reflects the reality that econometric models of maximum employment, while essential inputs to monetary policy, can be and have been wrong.”

This may be the first time in years when the Fed has admitted that canonical models it had followed for decades were wrong, leading to catastrophic results (such as the ill-fated rate hikes of 2015-2018, which as we noted last week may have cost Hillary Clinton the 2016 election). 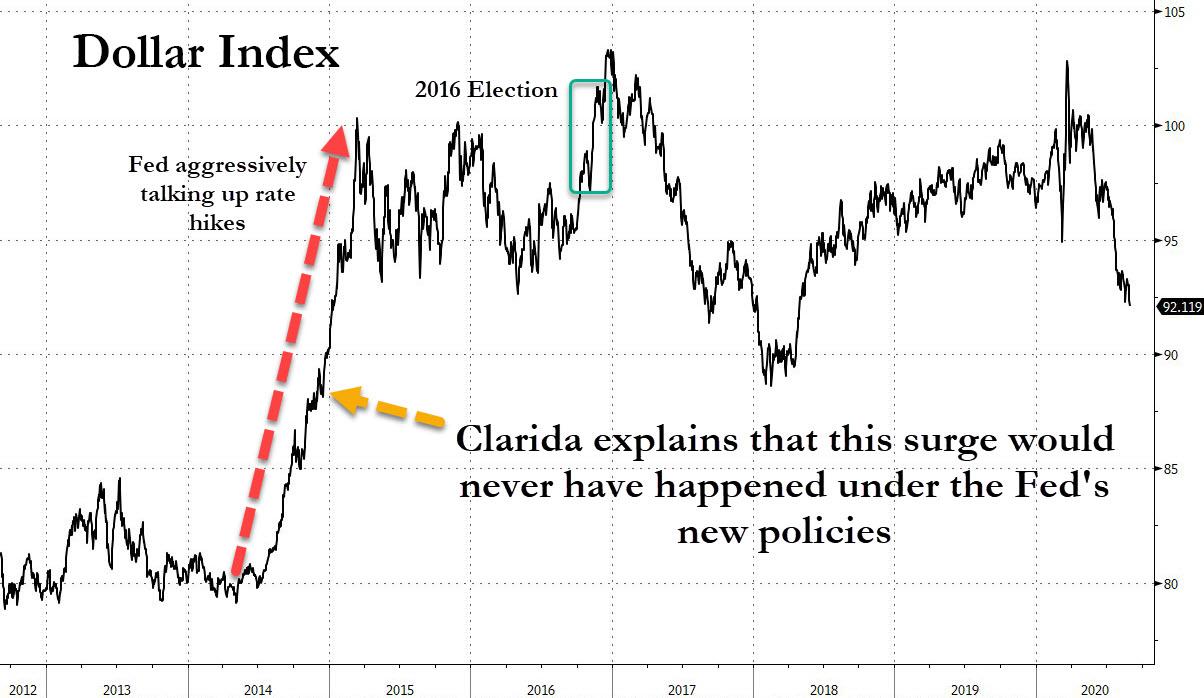 And yet, maybe there is more here than meets the eye: just over a year ago we asked the most obvious question – perhaps it was not the Phillips curve that was dead but “the way the government measures inflation is (purposefully) wrong.”

What if maybe, just maybe, the Phillips curve is alive and well but the way the government measures inflation is (purposefully) wrong

We were not the only ones to question the Fed’s desire to quickly shove the Phillips Curve into the dustbin of history (while ignoring the real elephant in the room – flawed inflation measurements and a CPI and PCE print that have been gamed for political purposes since the 1980s): in a note today, SocGen’s cuddly permabear Albert Edwards writes that “it is totally wrong to believe that the Phillips Curve is dead, dormant or even flattened” instead noting that “there was simply more slack in the labor market than the Feds estimates of NAIRU at 5% supposed” something we also said for much of the past decade when we pointed out the 100 million or so people out of the labor force after every single jobs report.

Indeed, as Edwards continues, if one simply measures unemployment correctly “and the relationship still fits perfectly (right-hand chart below).”

“So”, the increasingly angry SocGen strategist fumes, “for the Fed to consign NAIRU to the dustbin of economic history just because of its own failure to consider that discouraged workers were holding down wages seems a total nonsense. But even using the simple U3 unemployment rate and looking at the rate at which companies were  increasing  wages,  I  simply  cannot  see  any  breakdown  in  the  normal  Phillips  Curve  relationship (see chart below).”

Here, Albert takes a slight detour into the implications of the Fed’s new policy review, which as Clarida and more recently Brainard said would have meant the Fed would not have launched the 2015-2018 tightening cycle at all, and writes that the “howls  of  protests  about  Fed  tightening  in  the  last  cycle  were  really  about the direction not the absolute level of interest rates. The Fed was tightening policy but from an extremely accommodative stance. It was taking its foot off the accelerator but not tapping the brakes. Monetary policy was not as loose as previously but was certainly not  tight.  This  is  a  key  and  important  difference.  A  tight  monetary  policy  would  have  slowed growth relative to trend growth. A return to neutral would not.”

To justify this point, the SocGen strategist shows the June 2019 dot plot when the Fed Funds were at 2.5%, and when this rate was only considered “long-term neutral (right-hand column) by the Fed policy committee (see below, of course this 2.5% neutral long-term rate is just an informed guess).  “

In any case, after  having  been  criticized  for  “merely  taking  its  foot  off  the  gas  pedal” and viewing its own actions as potentially resulting in the Trump presidency,  Edwards writes that the  Fed  has  responded “by putting the car into cruise control at top speed (see charts below). Repeating Greg Ips point, in the new Fed regime unemployment can be too high but never too low. What could possibly go wrong?”

Well, as the events in the past 10 years which have culminated with record wealth and income inequality, record asset prices at the expense of virtually no real wage growth, and a political picture that is more polarized than ever and results in almost daily riots and shootings across America,  a lot.

But what makes me Edwards especially sad “and indeed angry is not just that the Fed has resorted to virtue signalling to justify  its new maximum employment policy by deliberately placing this in the context of closing unemployment inequality among racial and social minorities (the overwhelming majority of economists would consider that reducing employment inequality has nothing to do with the blunt tools of monetary policy)” but even worse “the extreme monetary largesse the Fed has now embarked on in pursuit of its utopian ideals will merely exacerbate still further the massive wealth inequality that their policies of recent decades have already caused, with rampant financial and asset price inflation making the 1% even richer and thereby worsening rather than healing social division.” As Edwards snidely remarks, “If  the  process  of  achieving  maximum  possible  employment  and  reducing  racial  and  social  disparities in unemployment were achievable without a car crash I would be all for it.”

And then, Edwards concludes, “when the next inevitable financial market bust comes, the necessary (again!) aggressive bailouts of Wall Street at the expense of Main Street will further stick in the craw of the very people who the Fed claim it is trying to help. The unintended consequences of the Feds new more aggressive policies seem destined to make inequality worse not better”, something which Rabobank already observed one week ago at the risk of being expelled from the “establishment” club where everyone only says nice things about the Fed. For those who missed it, here is what Rabobank’s Philip Marey bravely said, risking his job and career by telling the truth:

It took the Fed six years to describe symmetry of the inflation target in the Statement on Longer-Run Goals. While not completely irrelevant, it is the wrong kind of symmetry to focus on. While the Fed’s step to make the inflation target ‘more’ symmetric may benefit the wages of the average American somewhere beyond 2022, it does not really address the deeper problem with the role the Fed is playing in the US economy. It could be argued that the Fed’s policies have become part of the problem, instead of the solution. At least this should be a topic for debate in the FOMC, instead of talking a whole year about whether to use an average or not.

The much deeper problem for the US economy is the asymmetric impact of Fed policies on households and businesses. The Fed’s monetary and regulatory policies have contributed to a form of capitalism where the rewards are going to the 1% and the risks are borne by the 99%. The current crisis response has made it painfully clear again that the Fed’s policies benefit high income individuals and large corporations, while small businesses and low income individuals bear the burden. While the Fed likes to see itself as part of the solution to America’s economic problems, it should ask itself whether it is also part of these problems.

And Yet, as Edwards reads comments of Fed members, particularly on Twitter (especially those of one Neel Kashkari), “they  apparently cannot conceive they are part of the problem”, instead “they ooze overconfidence and arrogance and have learnt nothing from the disastrous outcomes of their repeated excessively easy money policies to goose the financial markets and economy.”

Edwards leaves the last word on the unintended consequences of the Fed’s disastrous actions to the late, great Paul Volker “who must be turning in his grave.” He wrote in 2018 shortly before his death:

“The real danger comes from encouraging or inadvertently tolerating rising inflation and its close cousin  of extreme speculation and risk-taking, in effect standing by while bubbles and excesses threaten  financial markets. Ironically, the “easy money,” striving for a “little inflation” as a means of forestalling deflation, could, in the end, be what brings it about.”

To this all we can add is that none of this is at all “ironic”: we have reached the part in the endgame where the Fed is willing to sacrifice the living standards of the lower and middle classes (why else is the Fed begging Congress to launch Universal Basic Income and handout checks to America’s middle class – it knows well that without this, the next major riot to take place will be at the Marriner Eccles building) just so it can inflate away the corporate and sovereign debt that the top 1% needs gone so it can perpetuate the corrupt crony-capitalist, neo-feudal system that the US currently lives under.

The GameStop Rally Is a Lively Party, and Regulators Aren’t Welcome