Australia is officially in recession, the first time in 30 years, as it suffers from a disastrous economic fallout of the virus pandemic. 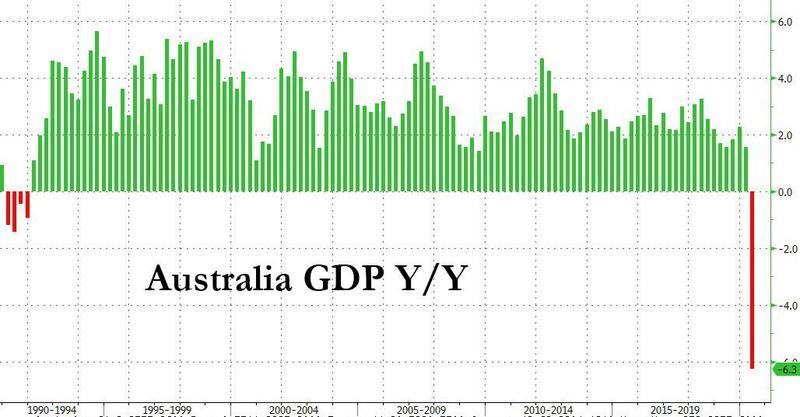 Tony Abbott, the former Australian prime minister, warned Tuesday, in a speech to the UK think tank Policy Exchange, that virus “hysteria” and draconian lockdowns are perpetuating the economic slowdown and have created a “something for nothing mindset” among younger generations living on furlough.

He said, “much of the media has indulged virus-hysteria with the occasional virus-linked death of a younger person highlighted to show that deadly threat isn’t confined to the very old or the already-very-sick or those exposed to massive viral loads.”

Abbott accused Victorian Premier Daniel Andrews of being a ‘health dictator’ by placing five million Melburnians under “house arrest.” He said politicians need to stop acting like “trauma doctors” and start adopting the mindset of “health economists” – as reckless money printing to sustain the country’s economy during lockdowns isn’t sustainable

“From a health perspective, this pandemic has been serious. From an economic perspective, it’s been disastrous,” Abbott said. “But I suspect that it’s from an overall wellbeing perspective that it will turn out worst of all.”

“At some point, we just have to learn to live with this virus in ways that can be kept up more or less indefinitely,” Abbott said.

He called for an end to “magic pudding economics” – the endless money-printing that has allowed governments to pay the wages of shut-down businesses, freeze rents and mortgages, and keep up unemployment payments without running out of funds.

This “something for nothing mindset,” he argued, risks congealing into a “new normal” – during a “people once sturdily self-reliant” into giving up personal responsibility in return for being taken care of by Big Brother.

The former PM blamed local governments for panicking into “crisis mode,” now trapped in an emergency as the “crisis adds to their authority or boosts their standing.”

Abbott said curfews in Victoria and travel bans of more than 3 miles were the most severe in the world outside of Wuhan, China, the alleged epicenter of the virus pandemic.

He said, “the fear of falling sick is stopping us from being fully alive.” In other words, virus hysteria has prolonged the downturn and produced deep economic scarring.

What Modern Democratic Socialists Can Learn from F.A. Hayek