BMO: The Strike Price Of The “Powell Put” Is Only Known To The Fed… So Markets May Retest It Soon

BMO: The Strike Price Of The “Powell Put” Is Only Known To The Fed… So Markets May Retest It Soon

After the most tumultuous week in markets since the June mini crash, the week ahead will offer very little in terms of economic data to augment investors understanding of the state of the economy or the domestic consumer, although the fiscal cliff continues to bit. According to the latest BofA data, total card spending as measured by aggregated BAC credit and debit card data declined 0.7% yoy for the week ending Aug 29th, confirming any recent upward momentum has now fizzled out. 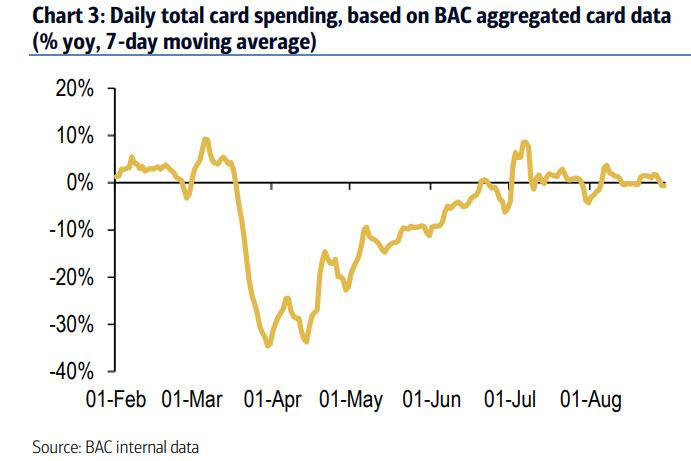 Worse, spending by recipients of Unemployment Insurance – which has either stopped or substantially tapered off since August 1 – has cratered, especially in home improvement, clothing and general merchandise categories. 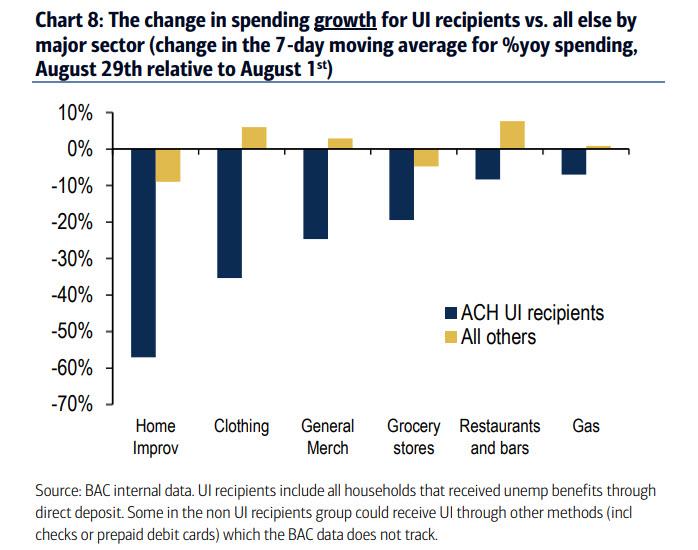 It is in this context of declining spending that an updated read on core-inflation will test the response of US rates to the first CPI print since the Fed unveiled its new Average Inflation Targeting framework.

As BMO’s Ian Lyngen and Jon Hill writes, an emphasis on consumer pricing pressure “risks fiddling while equities burn, as it were” because the dramatic retracement of domestic stocks from the fresh record highs – in large part due to the collapse of the gamma meltup trade following the identification of SoftBank as the responsible party – wasn’t exactly what the market needed to ease ongoing apprehension regarding the still-record high valuations.

More importantly, according to the BMO rates strategists, it also could mark the beginning of a troubling period for the Fed, because “in the wake of the NFP data, there was very little on the horizon that might have caused the Fed to bring forward any dovish policy action to the September 16 FOMC – with the exception of a sharp tightening in financial conditions led by a spike in equity vol.” Translated: the Fed may freak out about the market’s 4% drop which the following chart puts into perspective. 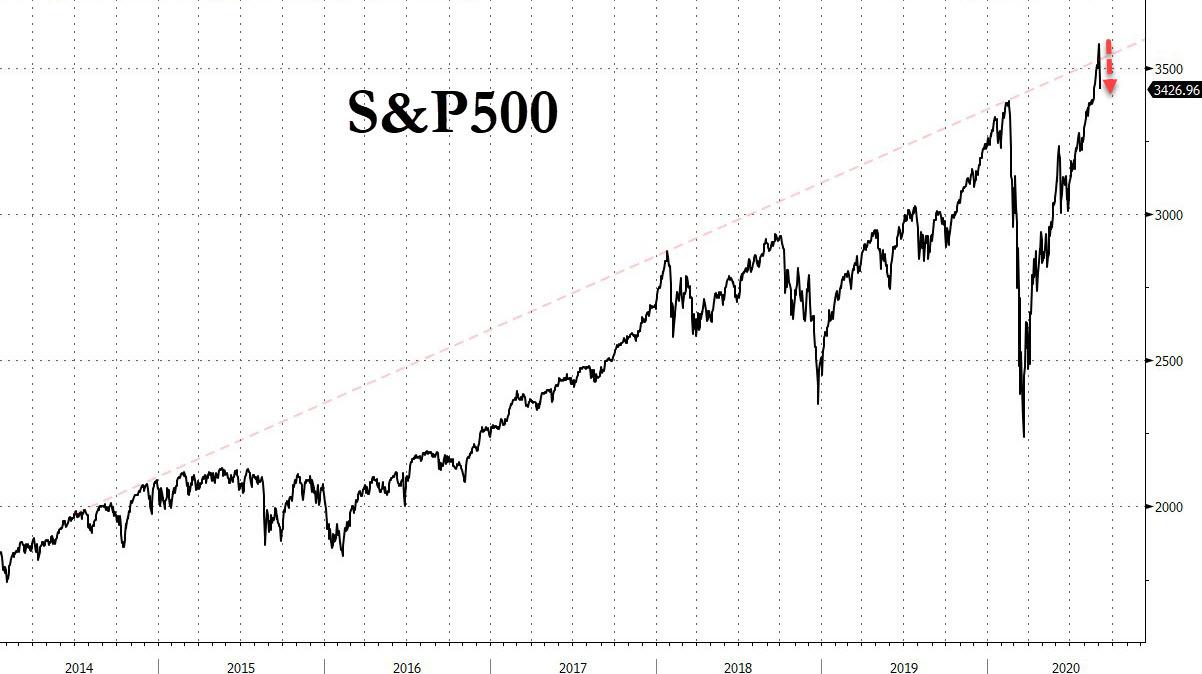 To be sure, the market hasn’t exercised the Powell put in a few months, so “no time like the present”, and as BMO further adds “conventional wisdom holds that it’s not the magnitude of any stock market correction that prompts monetary policymakers into action but rather the pace.” In any case, just two significant back-to-back selloffs from the highs won’t be sufficient (even if circuit breakers come into play) unless of course Powell wants to repeat Bernanke’s panic when he cut rates by 75bps in Jan 2008 in response not to a systemic crisis but a bad trade by Jerome Kerviel.

And speaking of the Powell Put, BMO writes that the performance of risk assets continues to be relevant even after a period of big-tech led weakness called into the question the sustainability of the S&P 500’s unrelenting march higher. “Indeed, eight consecutive sessions of all-time highs raises concerns about asset bubbles and financial stability” Lyngen writes however noting that “Powell has made it abundantly clear that until the labor market heals and signs of inflation percolate, the FOMC will be extremely reluctant to be anything other than accommodative.” This also confirms that the relationship between equities and financial conditions – i.e., the primary reason why the Fed openly is propping up stocks – should also not be discounted. Yet not even in the Fed’s centrally-planned universe does last week’s -4% drop warrant a policy response. On the other hand, “where exactly the strike price for the Powell put lies is only known to those in the Eccles Building, but we have no  doubt another round of volatility akin to March and April would quickly bring the Fed back into play,” BMO concludes, as it hints that the market may soon retest just how low the Fed will allow stocks to drop now that the meltup is over, before Powell intervenes again.

In any case, it is safe to say that the performance domestic equities during a period of radio silence from Fed-speakers ahead of the FOMC meeting is uniquely positioned to be more influential on the direction of monetary policy than would typically be the case, and so watch for any dovish hints from the Fed after Labor Day. Of course, “if stocks are down 35%-40% from the highs this time next week, it is difficult not to assume investors will look to Powell for reassuring dovishness” Lyngen writes, although it is unlikely that the market will lose a third of its value in the coming days.

Finally, in terms of what the Fed unveils at the Sept FOMC when expectations are high for even more easing, a recent BMO survey indicates that the market is divided on whether the next move is outcome specific forward guidance or an extension of the weighted-average-maturity of the existing QE program. There is also the option of increasing the balance sheet at a faster rate using the existing breakdown of purchasing in Treasuries, MBS, and corporates. That said, It’s much too soon to speculate if the upcoming meeting is anything more than a placeholder, although there is little question the sharp upward trajectory of the VIX will be first in the post-holiday ‘what to watch’ queue (unless of course the blow up of Masa Son’s gamma gambit doesn’t send implied vol plunging).