Authored by Michael Anton via The American Mind, 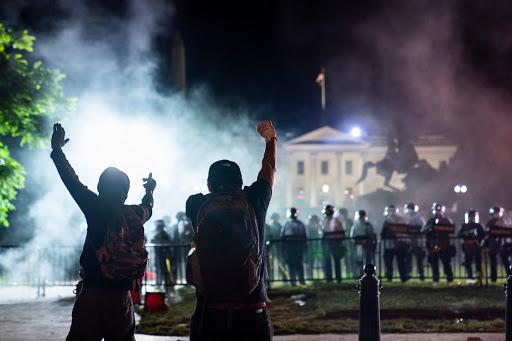 As if 2020 were not insane enough already, we now have Democrats and their ruling class masters openly talking about staging a coup. You might have missed it, what with the riots, lockdowns and other daily mayhem we’re forced to endure in this, the most wretched year of my lifetime. But it’s happening.

It started with the military brass quietly indicating that the troops should not follow a presidential order. They were bolstered by many former generals—including President Trump’s own first Secretary of Defense—who stated openly what the brass would only hint at. Then, as nationwide riots really got rolling in early June, the sitting Secretary of Defense himself all but publicly told the president not to invoke the Insurrection Act. His implicit message was: “Mr. President, don’t tell us to do that, because we won’t, and you know what happens after that.”

All this enthused Joe Biden, who threw subtlety to the winds.

The former United States Senator (for 26 years) and Vice President (for eight) has not once, not twice, but thrice confidently asserted that the military will “escort [Trump] from the White House with great dispatch” should the president refuse to leave. Another former Vice President, Al Gore, publicly agreed.

One might dismiss such comments as the ravings of a dementia patient and a has-been who never got over his own electoral loss. But before you do, consider also this. Over the summer a story was deliberately leaked to the press of a meeting at which 100 Democratic grandees, anti-Trump former Republicans, and other ruling class apparatchiks got together (on George Soros’s dime) to “game out” various outcomes of the 2020 election. One such outcome was a clear Trump win. In that eventuality, former Bill Clinton White House Chief of Staff John Podesta, playing Biden, refused to concede, pressured states that Trump won to send Democrats to the formal Electoral College vote, and trusted that the military would take care of the rest.

The leaked report from the exercise darkly concluded that “technocratic solutions, courts, and reliance on elites observing norms are not the answer here,” promising that what would follow the November election would be “a street fight, not a legal battle.”

Two more data points (among several that could be provided). Over the summer, two former Army officers, both prominent in the Democrat-aligned “national security” think tank world, wrote an open letter to the Chairman of the Joint Chiefs in which they urged him to deploy the 82nd Airborne Division to drag President Trump from the Oval Office at precisely 12:01 PM, January 20, 2021.

About a month later, Hillary Clinton declared publicly that Joe Biden should not concede the election “under any circumstances.” The old English major in me interprets the word “any” to mean “no,” “none,” “nada,” “niente,” “zero,” “zilch” “bupkis”…you get the idea.

This doesn’t sound like the rhetoric of a political party confident it will win an upcoming election.

The Cover-Up in Plain Sight

So why are the Democrats—publicly—talking about the conspiracy?

Because they know that, for it to succeed, it must not look like a conspiracy. They need to plant the idea in the public mind, now, that their unlawful and illegitimate removal of President Trump from office will somehow be his fault.

Never mind the pesky detail that the president would refuse to leave only if he were convinced he legitimately won. Remember: Biden should not concede under any circumstances.

The second part of the plan is either to produce enough harvested ballots—lawfully or not—to tip close states, or else dispute the results in close states and insist, no matter what the tally says, that Biden won them. The worst-case scenario (for the country, but not for the ruling class) would be results in a handful of states that are so ambiguous and hotly disputed that no one can rightly say who won. Of course, that will not stop the Democrats from insisting that they won.

The public preparation for that has also already begun: streams of stories and social media posts “explaining” how, while on election night it might look as if Trump won, close states will tip to Biden as all the mail-in ballots are “counted.”

The third piece is to get the vast and loud Dem-Left propaganda machine ready for war. That leaked report exhorted Democrats to identify “key influencers in the media and among local activists who can affect political perceptions and mobilize political action…[who could] establish pre-commitments to playing a constructive role in event of a contested election.” I.e., in blaring from every rooftop that “Trump lost.”

At this point, it’s safe to assume that unless Trump wins in a blowout that can’t be overcome by cheating and/or denied via the ruling class’s massive propaganda operation, that’s exactly what every Democratic politician and media organ will shout.

What then? The Podesta assumption is that the military will side with the Dems. There are reasons to fear they might. The Obama administration spent a great deal of political capital purging the officer corps of anyone not down with the program and promoting only those who are.

Still and all, determining the outcome of an election would be the most open political interference possible from our allegedly apolitical military, and it’s plausible that the brass won’t want to make its quiet support of the ruling class agenda that overt. The aforementioned Chairman has already stated that the military will play “no role” in the outcome of the election. That’s probably not a feint, but one wonders if it will hold given the obvious attempt to influence military thinking by people like Jeffrey Goldberg in his recent Atlantic essay.

Can the Dems rely on the Secret Service to drag Trump out? I have my doubts on this one. I’ve seen the Service up close; it really is (or strongly appears to be) apolitical. It has a job to do: protect the president, whoever that is. Officers take that job very seriously. If they don’t believe Trump lost, I don’t think they can be counted on to oust him. On the other hand, were they to believe he did lose and was refusing to leave—a scenario I find impossible to imagine but the Democrats insist is just around the corner—it’s possible the Service might act.

Barring all that, what’s left? Remember that phrase from the Dem war game: “street fight.” In other words, a repeat of this summer, only much, much bigger. Crank the propaganda to ear-drum shattering decibels and fill the streets of every major city with “protesters.” Shut down the country and allow only one message to be heard: “Trump must go.”

I.e., what’s come to be known as a “color revolution,” the exact same playbook the American deep state runs in other countries whose leadership they don’t like and is currently running in Belarus. Oust a leader—even an elected one—through agitation and call it “democracy.”

The events of the last few months may be interpreted as an attempted color revolution that failed to gain enough steam, or as a trial run for the fall.

Is the Trump Administration prepared?

Here’s one thing they could do: play their own “war game” scenario so as to game out possibilities and minimize surprises. They should also be talking to people inside and outside of government whom they absolutely trust to get a clearer sense of who on the inside won’t go along with a coup and who might.

They also need to set up or shore up – now – communication channels that don’t rely on the media or Big Tech. Once the ruling class gives word that the narrative is “Trump lost,” all the president’s social media accounts will be suspended. The T.V. channels, with the likely exception of Fox News, will refuse to cover anything he says. Count on it. He’s going to need a way to talk to the American people and he has to find the means, now.

For the rest of us, the most important thing we can do is raise awareness. If there is a conspiracy to remove President Trump from office even if he wins, they’re telling you about it precisely to get you ready for it, so that when it happens you won’t think it was a conspiracy; you’ll blame the president.

Peter Schiff: If You Understood What This Means, You’d Be Buying Gold As Fast As You Can