In case the general public needed one more reason to ban China’s spying social network, here it is: overnight, TikTok said it was working to remove graphic videos of a man taking his own life and banning users who keep trying to spread the clips on the popular social media platform. It’s the latest example of the ongoing struggle by big tech companies to police their platforms for harmful content amid increasing pressure from regulators.

The video was originally livestreamed on Facebook before being circulated on other platforms including TikTok, the company said. While the company did not give more details about the video, news reports say it has been circulating on TikTok since Sunday and shows a man killing himself according to AP.

“Our systems, together with our moderation teams, have been detecting and blocking these clips for violating our policies against content that displays, praises, glorifies, or promotes suicide,” TikTok said in a statement.

“We are banning accounts that repeatedly try to upload clips,” the company said, adding that it appreciated users who reported the content.

In a follow up from NY Post, the clip is allegedly of a 33-year-old Army veteran from Mississippi who served in Iraq, who shot himself in the head live on Facebook — and social media sites have been scrambling to remove the harrowing footage, which went viral more than a week ago, according to reports. Ronnie McNutt, who worked at a Toyota plant in Blue Springs, New Albany, killed himself in front of his computer on Aug. 31 during a livestream on Facebook, the Daily Star reported.

There were unconfirmed reports that McNutt had lost his job and broken up with his girlfriend.

In the days since, the horrifying footage has been shared on multiple social media platforms, including TikTok, where it reportedly ended up on the video-sharing app’s “For You” trending homepage.

A flood of social media users have expressed their alarm at stumbling on the clip and warned others to avoid watching the bearded vet commit suicide.

“If you see this guy on your FYP [For You page] please scroll up immediately, it’s very gruesome and I highly suggest you stay away from TikTok for a while,” one user said on Twitter, according to the Daily Star.

“I was scrolling TikTok and suddenly there’s a video of a guy that killed themselves with a shotgun and I am seriously warning you DO NOT watch it DO NOT SEARCH FOR IT because it’s very terrifying and gory so pls BE CAREFUL god damn I’m shaking,” another user said. 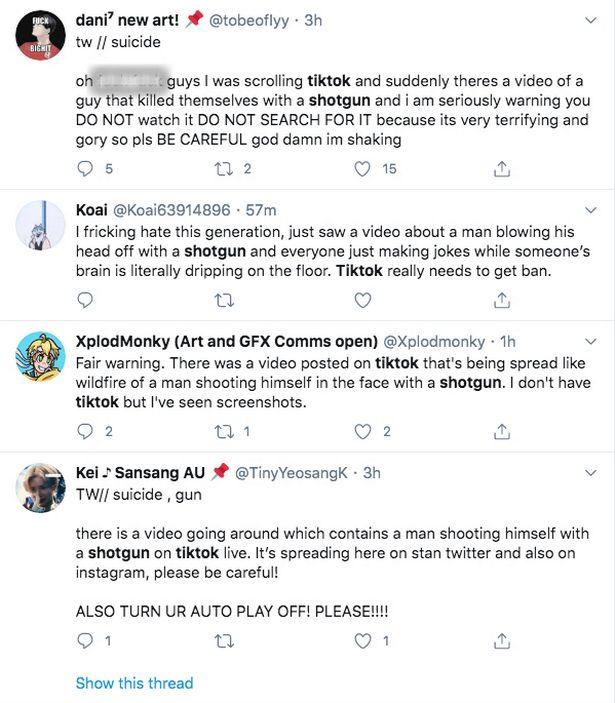 A TikTok rep told the Daily Star: “Our systems have been automatically detecting and flagging these clips for violating our policies against content that displays, praises, glorifies, or promotes suicide.

TikTok’s latest struggle comes as President Trump has ordered Tiktok’s Chinese owner, ByteDance, to sell its U.S. operations over concerns about cyber-security and censorship. The platform has become extremely popular with teens largely because of the company’s algorithms, which decide what videos users see without first requiring them to follow other users or specify their preferences.

Facebook said it removed the original video last month on the day it was streamed and has “used automation technology to remove copies and uploads since that time.”

Social media users have been warning others about the clips, saying that some have been edited to include shots of cats to trick viewers. Others are posting a screenshot of the video’s beginning to make people aware of what clips to avoid.

The Genocidal Roots Of The Green New Deal: Limits To Growth & The Unchaining Of Prometheus

Bahamian Official Filmed Cat-5 Dorian As It Swallowed His Home