While much attention has fallen in recent days on SoftBank and the fact that the Japanese Venture Capital conglomerate has increasingly been acting as a hedge fund, using a recently hired Deuteche Bank prop trader to build a stake in public equities and then supercharging returns by also buying calls on these securities, nothing has been said about those market makers that have been critical in not only enabling the daytrading retail public – which thanks to Robinhood and government stimulus checks has grown by millions in recent months – to engage in a similar call-buying frenzy as we explained previously, but also profiting from it. 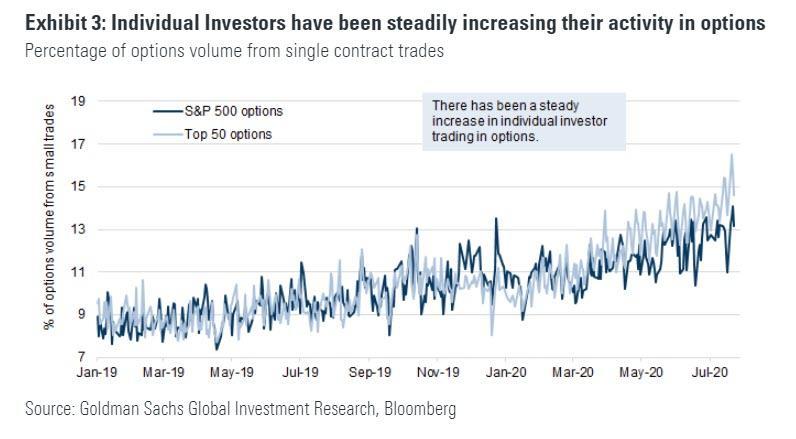 Which is why we were surprised to read that none other than David Silber, the head of institutional equity derivatives at Citadel Securities decided to preemptively come to the defense of said market-makers – perhaps sensing that when there is a real crash, all those who lose money from daytrading calls (and occasionally puts) will demand punishment for parties that enabled this euphoric splurge – and in an interview with Bloomberg in which he sought to downplay the role of those benefitting from the retail option frenzy which was instrumental for the recent “gamma” meltup, said to stop blaming options for the recent market drop.

Ironically, instead of calming the market, he may have kicked an entirely new hornets’ nest.

Speaking to Bloomberg, Silber concedes that “increased retail trading, along with separate buying by large institutions, contributed to swings in Nasdaq 100 shares – whipping up volatility as dealers hedged against options price drift known as gamma, but he claimed that “many other things are at work” while refusing to comment on any specific trader or investor.

First, we present some of the highlights from his interview:

On the bout of volatility:

The moves in the market can be more one way or the other based on gamma positioning and you’ve probably seen some of that as many dealers are currently short options due to market demand.

Other potential factors include retail stepping back a bit to reevaluate as the market takes a breather, as well as some profit taking from the near 80% increase we had seen since the lows earlier this year.

In a testament to the option-driven frenzy, in July we first reported that in a “historic inversion”, the average daily volumes of options traded exceeded shares traded for the first time.

Additionally, as Bloomberg adds, more options on stocks like Apple and Tesla traded than did options on the largest S&P 500-tracking exchange-traded fund, which trades under the ticker SPY::

That “is a definite shift in market dynamics — where single stock volume out-paces index volume, with the retail world driving that, perhaps. And then you add on top of it, the story of the large institutional investor, which adds in a new element from a risk perspective.”

“Options market dynamics are becoming a larger part of the equity market, but I would not confuse them for being the largest part or the only part of the equity market,” he said by phone. “The large Nasdaq run up that we’ve seen, as well as uncertainty around the virus, elections and international trade, there are many factors that lead to investor sentiment and buying versus selling dynamics in addition to what is getting all the attention right now.”

“The Nasdaq selloff over the last few days has been fairly orderly, you’ve not seen implied volatility take another leg up and yesterday we actually saw implied vols tick a bit lower in a new spot down, vol down regime. The implication is that some of this might have even been in the market already and that a pullback isn’t that big of a surprise. What you find though are people now looking for what’s leading or causing that pullback, and that’s where things like growing retail participation and the large institutional buyer start to drive the narrative. So while certainly a part of it, is it the only thing happening in the market right now? No.”

All of this is roughly accurate, but what David predictably forgot to mention Citadel’s role in all of this.

As a reminder, the Chicago market-maker accounts for more than a quarter of all U.S. equity options volume. In other words, if there is one hub to the option-driven frenzy of recent weeks, it is Citadel. And, by extension, if there is any one entity that stands to make a killing from the unprecedented option trading frenzy, it is Citadel.

There’s more: while it is already known that Citadel – which recently was fined by FINRA for frontrunning client orders – is the top source of revenue for the “free” retail brokerage Robinhood, accounting for roughly 60% of Robinhood non-directed, as well as almost 50% of all market and limit orders, it has also solidly planted itself as the top client when it comes to buying Robinhood’s option flow.

In other words, while SoftBank was crafting the perfect gamma trap, nobody was more intimately aware of the option trading patterns of US retail investors, who many argue were as much if not a greater factor than SoftBank, in the liliquid August meltup.

Is it possible that Citadel – which in addition to a giant market maker is also one of the biggest hedge funds in the world and clearly benefits from rising prices and “The Biggest “Gamma Squeeze” In History” – was also involved in the marketwide meltup, with or without advance knowledge of what retail daytraders/SoftBank traders were doing?

Finally, we would be remiss if we did not point out that Akhsay Naheta – who is currently Head Of SoftBank’s public equity asset management team and was the “brains” behind the SoftBank gamma meltup – worked until recently at Deutsche Bank, so Citadel’s David Silber was previously Managing Director at – you guessed it – Deutsche Bank.

As Bloomberg reported earlier this year, Citadel’s institutional options group was launched in January, and under David Silber it firm assembled a seven-person team “to win order flow from institutional investors.”

“We are digging into every part of equity options execution and examining what we can do more efficiently to create a better experience for clients and improve market transparency,” Silber said in a February interview.

The company says it has over 1,200 institutional clients, with about 40 signed on to trade equity options. Such relationships have helped make Citadel Securities one of the largest trading firms in the world, generating $3.5 billion of revenue in 2018 from markets including stocks, Treasuries and derivatives.

One wonders if SoftBank is among Citadel’s institutional clients and just what the terms of such a contract would be; one also wonders if Citadel – which, again, was recently fined by FINRA for frontrunning order flow – and which has the best overview of both retail and institutional option order flow decided to take advantage of this unprecedented insight into the global derivative market, just how would that manifest, we wonder.