Just ahead of the 19th anniversary commemorating the tragic events of September 11, 2001 when America came under attack, the anti-interventionist thinktank The Quincy Institute for Responsible Statecraft has featured a study detailing the millions of people displaced across the globe by US foreign combat operations in the wake of 9/11.

“The wars the U.S. government has fought since the attacks of Sept. 11, 2001, have forced 37 million people — and perhaps as many as 59 million — from their homes, according to a newly released report from American University and Brown University’s Costs of War Project,” the report introduces.

It’s being called “the first calculation of its kind” given neither the Pentagon, nor State Department or any other federal agency has kept track of the mass displacements. 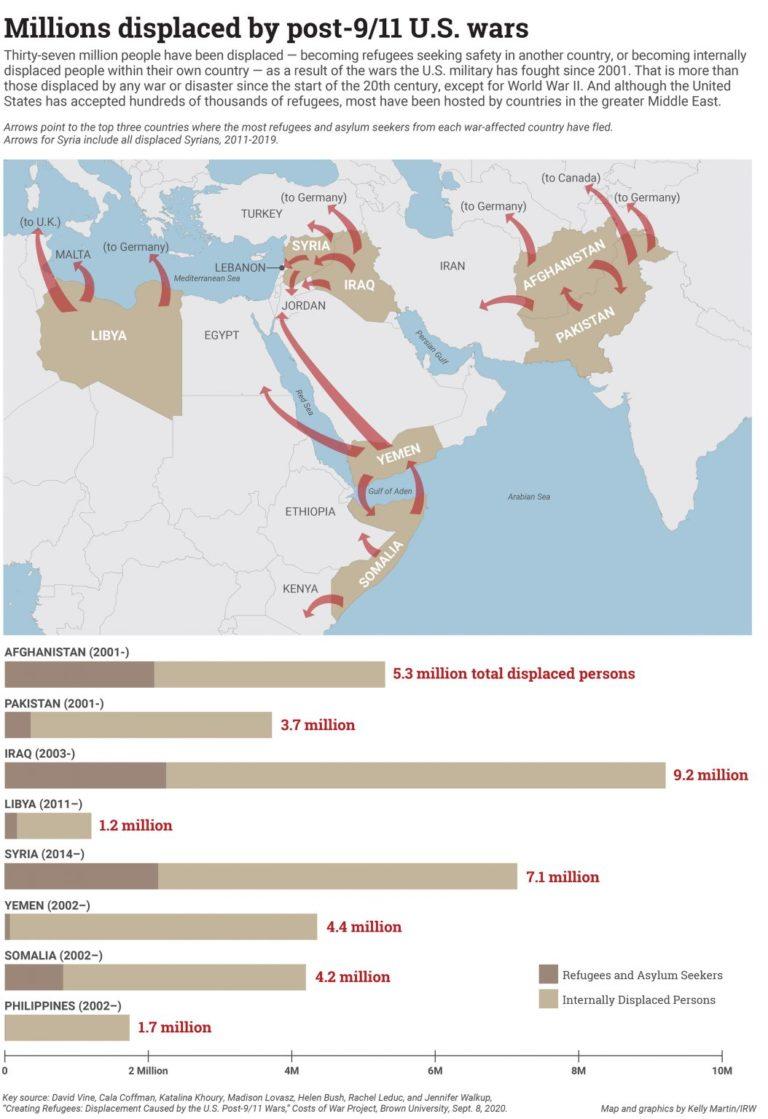 The study identifies that out of this 39 million total, eight of the most violent wars and ‘counter-insurgency campaigns’ are responsible for the vast majority of displacements. They are Afghanistan, Iraq, Libya, Pakistan, the Philippines, Somalia, Syria and Yemen.

These wars were executed or overseen either by the Bush, Obama, or spanning into the Trump administration.

To drive home the magnitude, The Quincy Institute underscores that “Displacing 37 million people is equivalent to removing nearly all the residents of the state of California or all the people in Texas and Virginia combined.”

And further, “The figure is almost as large as the population of Canada.”

American military bases have also rapidly expanded across the globe in the wake of 9/11, mostly in Africa and the Middle East, as the following map produced by the Investigative Reporting Workshop (IRW) demonstrates.

“Until now, no one has known how many people the wars have displaced,” the report emphasizes. “Indeed, most Americans are likely unaware that U.S. combat operations have taken place not only in Afghanistan, Iraq and Syria, but also in 21 other nations since President George W. Bush announced a global war on terror.”

Here are the breakdown of post 9/11 mass displacements by country according to the Public Anthropology Clinic: