Text Sent To Bank Strategist’s 16-Year-Old Son: “Guys I Am Freakin’ Out Right Now Tesla Is Down 45 Points… Ask Your Dad What’s Going On”

Text Sent To Bank Strategist’s 16-Year-Old Son: “Guys I Am Freakin’ Out Right Now Tesla Is Down 45 Points… Ask Your Dad What’s Going On” 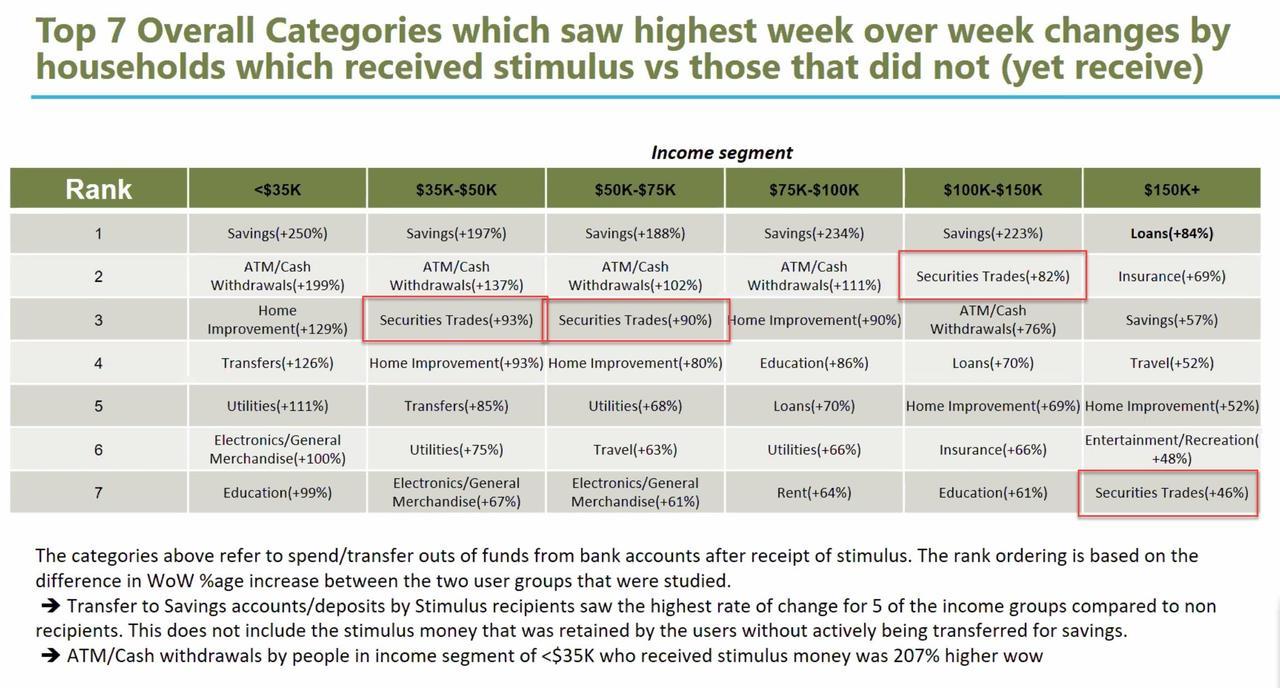 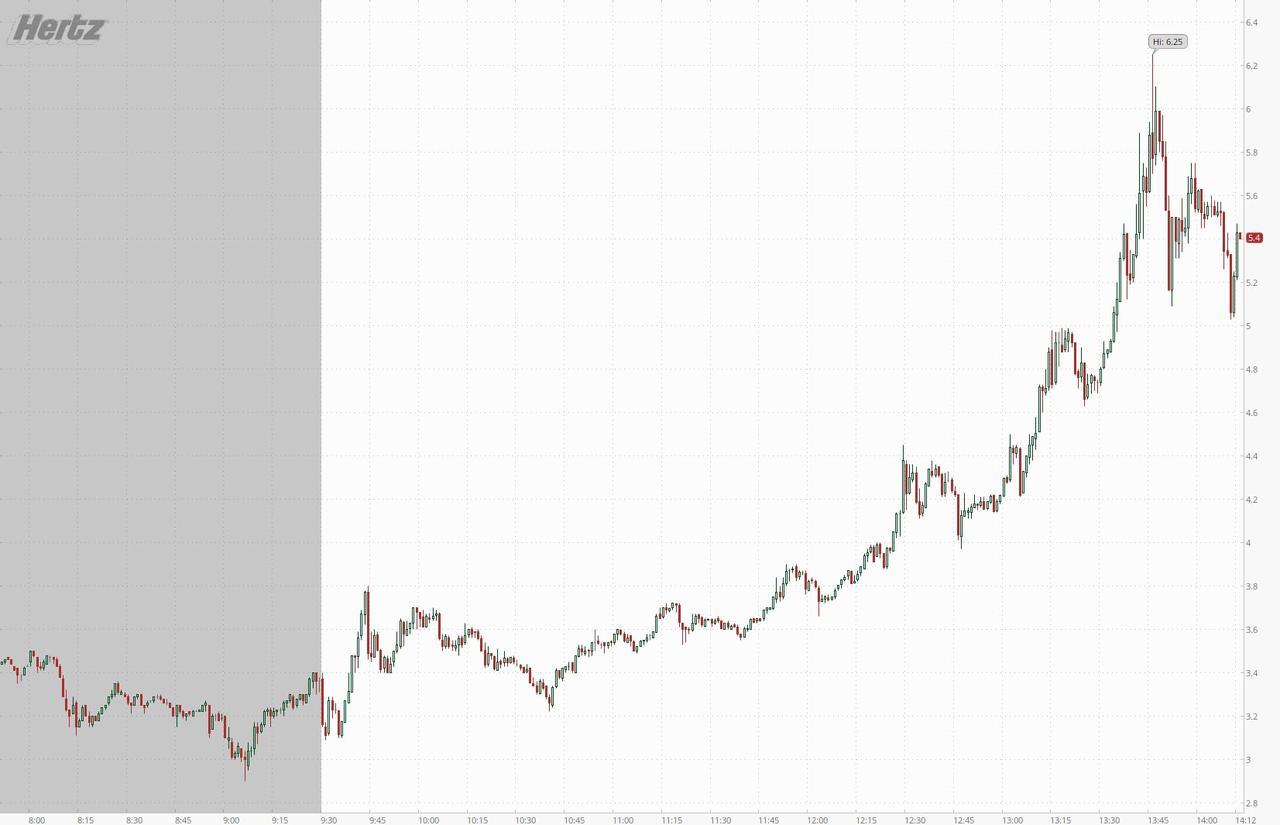 … and a frenzy in short-term levered bets via weekly call options that accentuated momentum and which SoftBank infamously capitalized on.

However, nothing captures the zeitgeist of the prevailing price setters better than the following quote from the latest Flow Show by Bank of America’s chief investment officer, Michael Hartnett who shares a group text message sent to his 16 year old son on Sept 4, the day after Tesla cratered:

“Guys I am freakin’ out right now Tesla is down 45 points can’t concentrate on Rocket League Billy ask your dad what is going on”.

That’s right: we now live in a world where for better or worse 16-year-olds are price setters and whose frenzied trading in “deep value” names such as Tesla is the reason why another BofA strategist, Jared Woodard, earlier this week declared that “the value factor as traditionally understood is broken” noting that the last ten years have seen the worst returns ever for US value stocks versus growth, even worse than during the dotcom bubble. 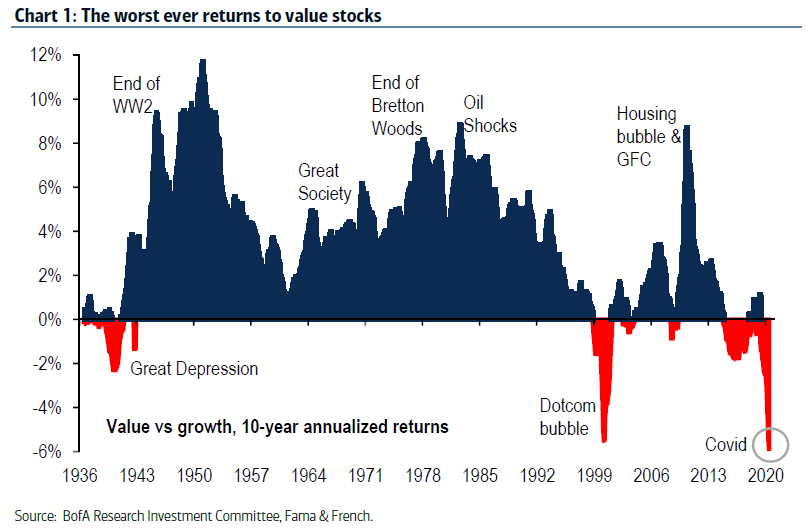 In the last 3 years value has given up all of its gains since the year 2000 (Chart 2). Since the lows in March of this year, value stocks have also struggled. The rebound in WTI crude oil from $12/bbl. to $43/bbl. has helped inflation expectations surge toward more normal levels, but even that hasn’t helped value recover (Chart 3).

But even before the coronavirus, value was performing poorly. Over the last ten years, value has rallied only twice, and more briefly (22m average) and weakly (16%/year).

All this suggests that the value factor as traditionally understood is broken. 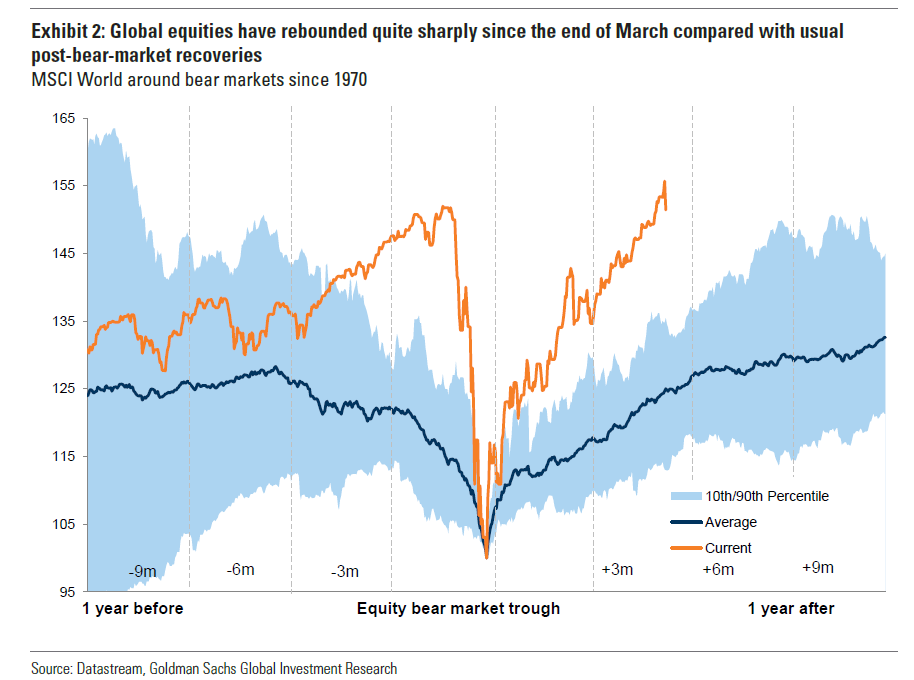 … Hartnett shows another stunning chart which breaks down the positioning of investors via sentiment and flows Z-scores and finds that while “old retails” equity buyers (high net worth clients) took the buying lead in March, ‘long only’ and hedge funds prevailed in April & May, it was “new retail” – i.e., Robinhood daytraders such as Hartnett’s son – that dominated in June thru  August. In fact, as shown in the chart below, retail traders had as much of an impact on August returns as hedge funds and derivative strategist (read SoftBank). 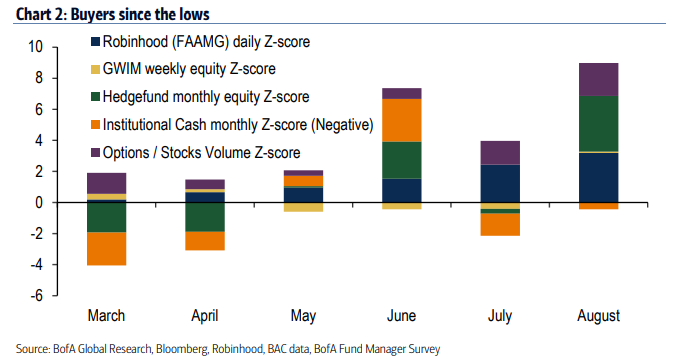 Yet even if one assumes that retail investors have become a bigger market force than hedge funds, long-onlies and the occasional Nasdaq whale, it would be naive to say the record rally from the March 23 lows is entirely thanks to 16-year-olds, and instead one has to look at why the momentum and growth strategies preferred by teenagers and Gen-Z have so handily outperformed value stocks, and why a basket of retail favorite stocks has crushed not only the S&P500 but hedge funds returns in 2020.

According to Woodard, the real reason why value has imploded (and greenlighted the piling of daytraders into growth and momentum stocks), is because, as we said last week, it’s all one trade, a trade which has been made explicitly possible by the global economic slump which the BofA strategist says is “tThe most powerful explanation for the death of value.” He explains:

The value factor is intimately tied to economic growth & inflation, and as both of those have become more scarce, so too have returns on any assets linked to them. A few key macro variables explain the ongoing mortification of value stocks. The 10-year Treasury yield, the ISM Purchasing Managers Index, and the 5-year forward 5-year inflation breakeven rate account for 79% of the variation in growth vs. value in recent decades (Chart 4). 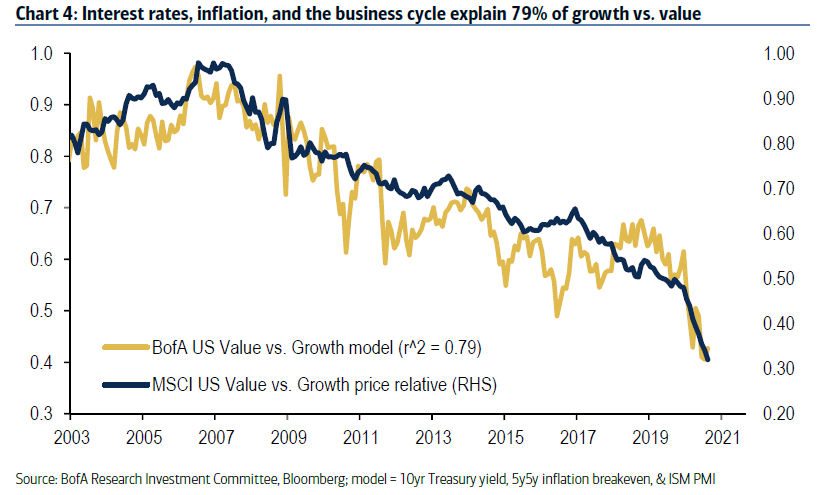 Furthermore, there has always been a link between inflation (and inflation expectations) and value stocks: “for decades, value criteria have produced big exposures to cyclical, levered sectors like financials & energy and underweights in secular growers and defensives like technology, communications & health care” Woodard writes and demonstrates in the following chart: 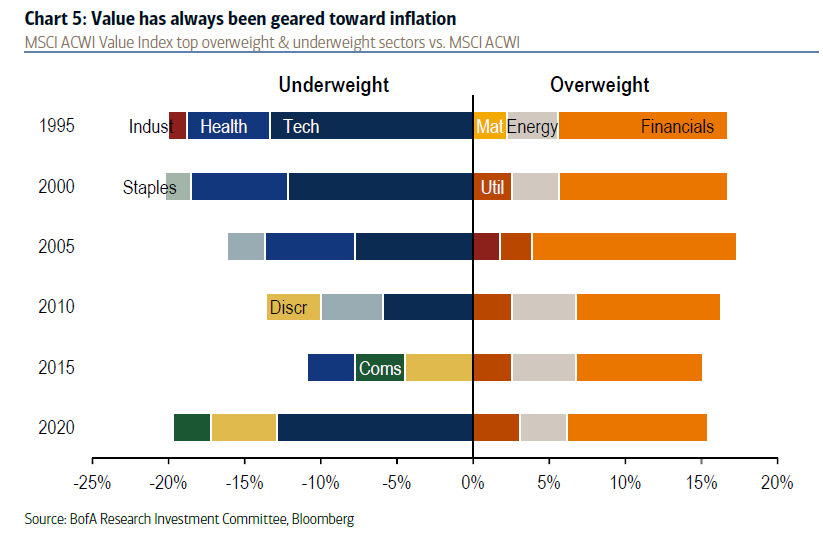 And yet, in the post Lehman world of lower growth expectations, lower inflation and a flatter yield curve – a trend which was only supercharged by the Covid shutdowns – the biggest beneficiaries have been growing companies that rely on long-term debt (which they use among other thing to buy back record amounts of stock), while those same macro conditions also reduce the worth of short-term dividends, which are typically paid by value stocks.

Which brings us to the One Trade Chart (which we first showed last week): until the macro environment changes and inflation returns as the dominant market force, Woodward expects the winners of the 2000s and 2010s – growth vs. value, large caps vs. small, US vs. EAFE, market cap vs. equal-weight, USD vs. EM FX, Treasury bonds – to keep winning and to stay crowded. 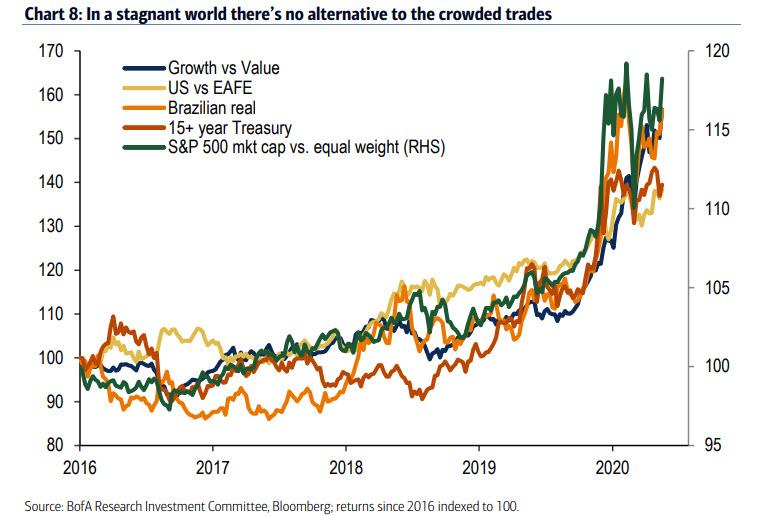 Yet while the supremacy of the trades shown above (at the expense of value) is a symptom of the economic growth malaise, the real question then is what is behind the ascent of deflation and low rates.

Luckily, we have that answer too, having revealed it back on June 1, when with just one chart we blew up everything that is flawed with monetary policy. It showed that while lower rates indeed stimulate spending and lead to lower savings, this effect peaks at around 4% and then goes negative. In fact, the lower yields and rates drop below 4% – not to mention to 0% or below – the lower the propensity to spend and the higher the savings rate! 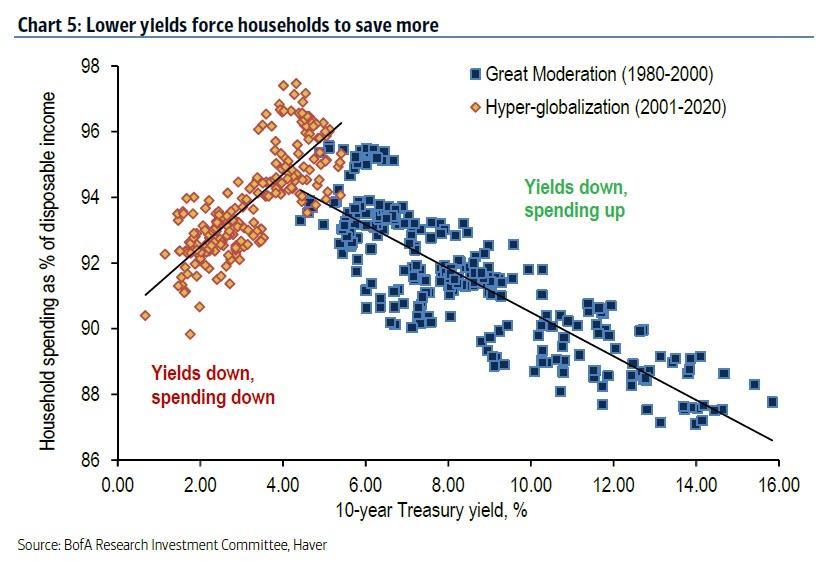 Hence deflation. Hence why “growth” is flourishing, and why we now have reports about the death of value (i.e., reflation) investing.

There is another reason why this chart of such epic importance: it confirms what so many have known but were afraid to voice as it ran against decades of flawed economic theory: it demonstrates without a shadow of doubt, that hyper-easy monetary policy is not inflationary but is deflationary. Which is catastrophic for central banks, who publicly state that the only reason they are pursuing ultra easy monetary policy which includes QE and negative rates, is not to goose the market higher (even though by now we all know that’s the real reason) but to stimulate inflation.

In any case, where the above logical chain leads us is that it is neither teenagers, nor SoftBank, nor hedge funds that are behind the rampant surge in growth – both in August and over the past decade – and the continued disintegration of value: they are merely riders on a bus that is and has always been driven by the Federal Reserve.

So is there any hope in the near or distant future that this will change? That the Fed will step off the gas and allow some normalcy to return to the market? Alas no, as Marko Kolanovic himself writes in a report today in which he make the bold prediction (bold, because until a few years ago it was only this website that would make it at the cost of great ridicule by so-called experts and sophisticated market pundits) that “without direct government transfers (stimulus and unemployment paychecks), continued central bank interventions, and massive borrowing from future generations, this “new normal” would have already collapsed.”

And since the Fed will never voluntarily cede control over what is at its core an unstable equilibrium, we expect even greater acceleration of the “bizarre” trades observed in August when on more than one occasion it seemed that the market would go parabolic.

As such, our advice to the friends of the 16-year-old Michael Hartnett junior is the following: have patience – it is only a matter of time before not only Tesla but every other asset class goes supernova (unless Musk has a terminal meltdown on Twitter) as the Fed has no other choice but to keep doubling down until one day it all falls apart and the fiat monetary system that enabled this insanity finally ends.

Per Bylund: The Entrepreneurial Ethic

Fake-flation – No, Autos Are Not “Cheaper Now”