Looking at the key market events this week, central banks take center stage, with a raft of policy announcements due from around the world. The highlight will come from the Federal Reserve on Wednesday, though we’ll also get decisions from the Bank of Japan and Bank of England (both on Thursday), as well as a number of EM central banks. Meanwhile as DB’s Jim Reid writes, attention will remain on Brexit, as the UK government’s incendiary Internal Market Bill is debated in the House of Commons this week. And in Japan, a new Prime Minister will be chosen following Shinzo Abe’s resignation.

Starting with the FOMC meeting on Wednesday, this is the first monetary policy decision since the virtual Jackson Hole symposium, at which it was announced that the committee’s longer-run goals and monetary policy strategy would be updated. In terms of the major changes, the Fed now “seeks to achieve inflation that averages 2 percent over time”, which would allow inflation to overshoot the target following a period of undershooting. It also changed the wording around its maximum employment objective, now saying that policy will be informed by its “assessments of the shortfalls of employment from its maximum level.” According to Deutsche Bank economists the release opened the door to adjustments in forward guidance and asset purchases at this meeting, though in a close call, they expect the Fed’s forward guidance on interest rates to remain unchanged and for the Committee to reframe their asset purchases as being focused on providing accommodation, not aiding market functioning. This meeting will also see the release of a new Summary of Economic Projections, which will include the first 2023 dot plot.

Meanwhile, in the UK there are likely to be a number of headlines this week, most notably on Brexit. That follows an escalation in tensions between the UK and the EU last week after the UK government published their Internal Market Bill, which seeks to override parts of the already-signed Withdrawal Agreement with the EU. In response, the EU called on the UK to withdraw these measures from the draft bill by the end of the month, and threatened to use legal remedies if the Withdrawal Agreement were violated. In terms of what happens next, today the bill will receive its first debate in the House of Commons, but the question will be how many Conservative MPs rebel on the matter, with last night seeing the former Conservative Attorney General Geoffrey Cox publish an article in The Times, saying that the bill would do “unconscionable” damage to the country’s international reputation.

Staying with the UK, attention will also be on the Bank of England on Thursday, who’ll be making their latest monetary policy decision. The base case per DB is that there won’t be a further £60bn QE package until December, though there are risks of an earlier announcement at the November meeting. Keep an eye out in case there’s a voting split between the MPC’s 9 members as some might seek additional stimulus.

Turning to Japan, this week sees the election of a new Prime Minister following Shinzo Abe’s decision to stand down for health reasons. In terms of the process, the ruling Liberal Democratic Party will gather today to elect a new Party President, for which the Chief Cabinet Secretary Yoshihide Suga is regarded as the frontrunner. Following the LDP’s election, the Diet will then hold an extraordinary session on Wednesday to elect a new Prime Minister, with the new cabinet expected to be announced on the same day. Against this backdrop, the Bank of Japan will also be holding its latest monetary policy meeting next week, with our economist expecting that the bank will maintain its current policy stance.

Finally on the data front, there are a number of interesting releases. In the US, we’ll get an increasing amount of hard data for August, including industrial production, retail sales, housing starts and building permits.  It’ll also be worth keeping an eye on the more topical releases however, especially with last week’s data on initial jobless claims and continuing claims having disappointed. 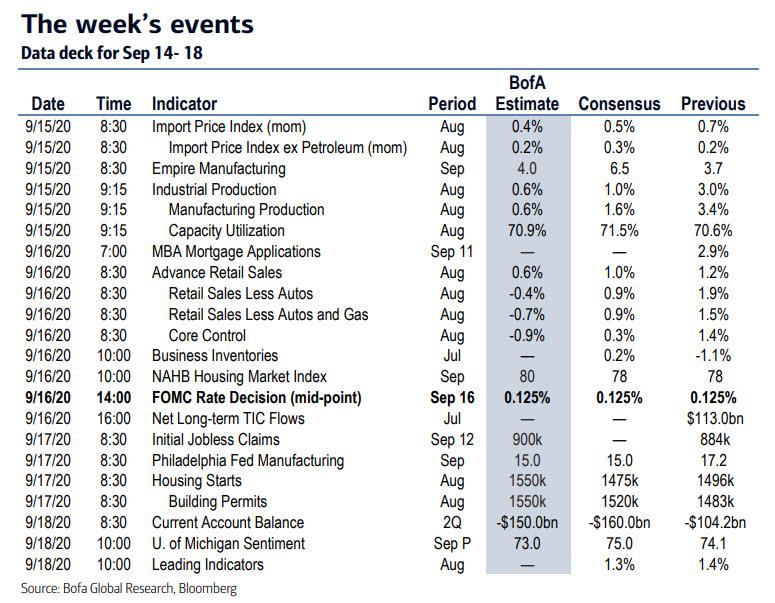 Separately, we’ll also get some major releases from China on Tuesday, including August’s industrial production and retail sales figures.

Below is a day-by-day calendar of events, courtesy of Deutsche Bank

Finally, looking at just the US, the key economic data releases this week are the industrial production report on Tuesday, the retail sales report on Wednesday, the jobless claims report and Philly Fed manufacturing survey on Thursday, and the University of Michigan consumer sentiment survey on Friday.

UK Gov’t Halts Fracking In England Ahead Of General Election