It’s been a rough day for Facebook: first the world’s biggest social network was dumped by Kim Kardashian who called on her tens of millions of global followers to boycott Mark Zuckerberg’s cash cow, and now the WSJ reports that the FTX is preparing to file a possible antitrust suit against the company, sending its stock plunging after hours, and dragging the Nasdaq lower. 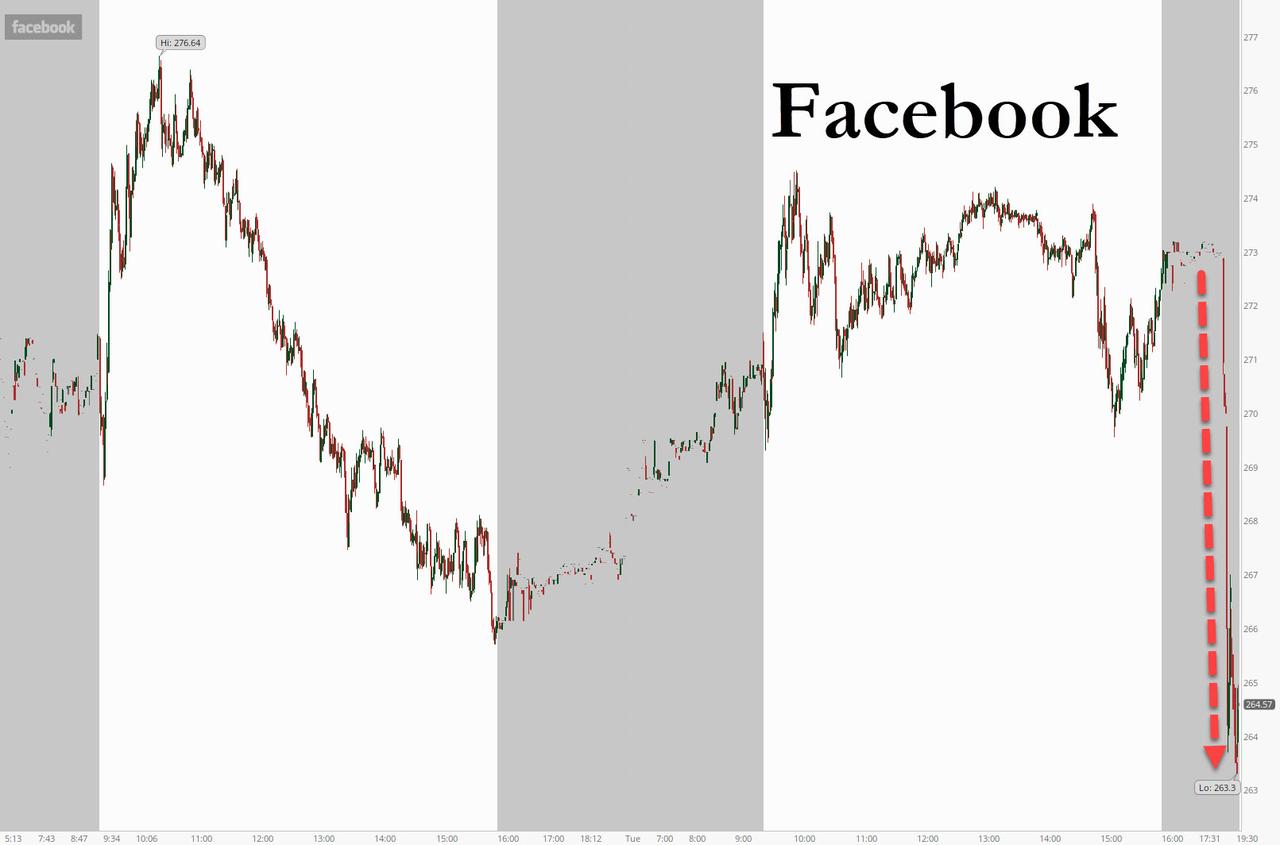 The report reveals that the FTC has spent more than a year investigating concerns that Facebook “has been using its powerful market position to stifle competition” and may file a suit before the end of the year to challenge the company’s monopoly in social media. The inquiry is part of a broader antitrust effort by authorities examining the conduct of a handful of dominant tech companies.

The WSJ reports that the probe, which is in its late stages and which was previously discloses by the company last year, included taking testimony from Mark Zuckerberg, something the commission didn’t do during a prior probe of the company’s privacy practices, and which resulted in a record-breaking $5 billion settlement. In other words, this time around either the monetary penalty will be materially higher, or the FTC may in fact pull a Standard Oil on Facebook, and split up the company.

The key FTC concerns and questions revolves around Facebook’s prior acquisitions, “as well as about issues related to how Facebook manages its platform with regard to app developers.” For its part, Facebook has countered that its acquisitions aren’t anticompetitive and have improved products and experiences for its users, although in light of today’s market moving snub by none other than Kim Kardashian that approach may be in jeopardy. One almost wonders if Kim’s tweet and the WSJ report weren’t coordinated.

Facebook has not yet held discussions with the FTC’s commissioners, which would likely happen at the very final stage of the process. At that point, the decision whether to sue Facebook will be in the hands of republicans, as a majority on the five-member FTC would need to vote in favor of any lawsuit. Currently that commission consists of three Republicans, including Chairman Joseph Simons, and two Democrats.

So far, no final decision has been made on whether to sue Facebook, and the WSJ notes that the commission doesn’t always bring cases even when it is making preparations to do so, such as when it decided against filing an antitrust complaint against Google Inc. in 2013 after a lengthy investigation.

Should the FTC sue Facebook and win, it could seek a range of remedies designed to promote competition against the company, from restrictions on how Facebook operates to breaking off pieces of its business. “The commission can’t unilaterally dictate such changes; it would first have to prove in legal proceedings that the company violated federal antitrust law, and that such changes were necessary.”

The FTC has a pair of options if it sues Facebook: It could bring a case in federal court or it could file a complaint in its in-house legal system, where the case would first go before an administrative law judge. The commission itself would then review that judge’s work and issue a decision, which Facebook then could challenge in a federal appeals court. If the commission wants to seek an interim injunction blocking certain Facebook practices before the end of litigation, it would have to go to federal court.

As part of its antitrust pursuit, the Trump administration will hardly stop with Facebook. The DOJ which shares antitrust authority with the FTC, is also planning to file an antitrust lawsuit soon against Google, the WSJ previously reported.

In any event, since a legal case against either company could likely take years to resolve, the officials who bring a lawsuit will likely not be around to see its conclusion. Furthermore, the Nov. 3 election could impact the future of any case, though both Republicans and Democrats have been critical of tech-company practices even if Facebook has been focusing its recent crackdown exclusively on posts emerging from the Trump campaign.

With Futures Limit-Down, ETFs Suggest Bloodbath In Stocks, Credit Is Even Worse

For those who MOCKED preppers, your day of reckoning has arrived