Since the last FOMC statement on July 29th, stocks have been in a world of their own (outperforming) while gold, bonds, and the dollar have shown only modest moves…

On the macro side, surprises have been more to the downside since the last Fed meeting.

Notably, the market’s expectations for rates has shifted notably more hawkish in the last few weeks since the FOMC statement…

And so, having spilled the beans prematurely that The Fed will undertake inflation-average targeting (which is really no different at all to the consistently poor performance The Fed has been undertaking to create inflation for a decade), expectations were not high for anything market-moving today with rates not expected to move, Fed purchases not expected to move, and any possible dovish signaling will stem from the Fed’s updated projections.

As we detailed earlier, while growth and unemployment forecasts will likely be nudged up and down respectively, the focus will be on the central bank’s forecasts for rates in 2023 (released for the first time) and on inflation to see if it still sees inflation running below target over its forecast horizon; if it does, the new policy framework implies it will be longer before the Fed begins thinking about lifting rates.

The dotplot indicates rate at ultra-low levels for years…

Key changes to the statement:

The Committee expects to maintain an accommodative stance of monetary policy until these outcomes are achieved. The Committee decided to keep the target range for the federal funds rate at 0 to 1/4 percent and expects it will be appropriate to maintain this target range until labor market conditions have reached levels consistent with the Committee’s assessments of maximum employment and inflation has risen to 2 percent and is on track to moderately exceed 2 percent for some time.

In addition, over coming months the Federal Reserve will increase its holdings of Treasury securities and agency mortgage-backed securities at least at the current pace to sustain smooth market functioning and help foster accommodative financial conditions, thereby supporting the flow of credit to households and businesses.

In assessing the appropriate stance of monetary policy, the Committee will continue to monitor the implications of incoming information for the economic outlook. The Committee would be prepared to adjust the stance of monetary policy as appropriate if risks emerge that could impede the attainment of the Committee’s goals. The Committee’s assessments will take into account a wide range of information, including readings on public health, labor market conditions, inflation pressures and inflation expectations, and financial and international developments.

Voting against the action were: 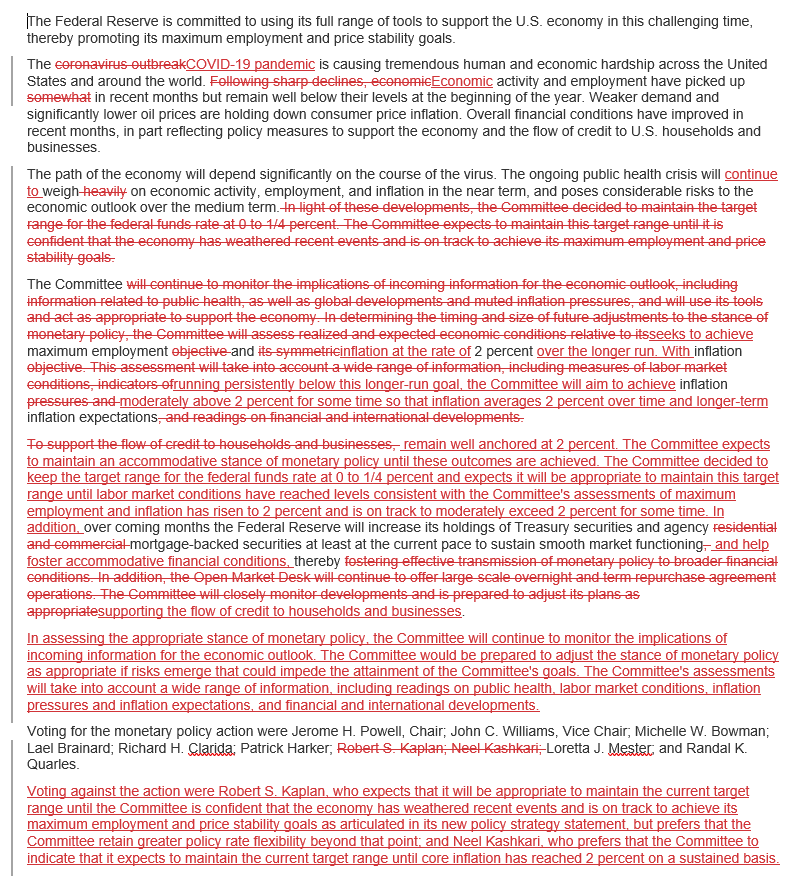 What Happens if Trump Becomes too Incapacitated to Serve, Drops Out of the Election, or Both?

Oil Is Soaring Amid “Supercycle” Chatter

Revenge of the Coronavirus