Submitted by Louis-Vincent Gave of GaveKal

In March, when Covid-19 began to rear its ugly head across the western world, national policy responses differed widely.

These different policy choices carried different economic costs. In the second quarter of 2020, Sweden (usually one of the more volatile OECD economies given its integration into the global industrial supply chain and its limited domestic consumer base) outperformed all other OECD countries. Unsurprisingly, France delivered the worst economic performance, its GDP falling by almost a fifth.

But the declared priority in France, as in other countries that embraced full lockdowns, was to save lives; the government always acknowledged that such altruistic behavior would have economic costs. In short, President Emmanuel Macron, like many other policymakers around the world, accepted the certainty of massive economic loss for the chance of saving an indeterminate, but potentially large, number of lives.

At the risk of sounding horribly cynical, it is time to ask whether the tradeoff was worth it. With six months of data behind us, we can now count the economic costs of the lockdown (see the chart above), and we can also attempt to estimate the number of lives saved.

Comparing Covid-related death rates between countries is challenging, not least because different countries have adopted different standards for reporting Covid-related deaths—did the patient die of Covid, or with Covid? As a result, the least controversial way to review the impact of Covid on a country’s population is to look at the country’s total weekly deaths, and see how the numbers compare both to past years, and to the total numbers of deaths in other countries. Given the absence of wars and natural disasters, the assumption is that any “excess deaths” this year are mostly linked to Covid.

This approach is reasonable, because death, like taxes and policymakers’ responses to Covid, is one of those things that simply can’t be avoided—and governments are actually fairly competent at tracking the numbers of deaths that occur within their borders. In short, total death numbers are hard to fudge. Of course, the populations of Denmark, France, Sweden Switzerland and the US are vastly different. So to put every country on an equal footing, the data in the chart overleaf shows weekly numbers of deaths for each of these five countries indexed to 100 in 2013.

The chart is interesting for a number of reasons. 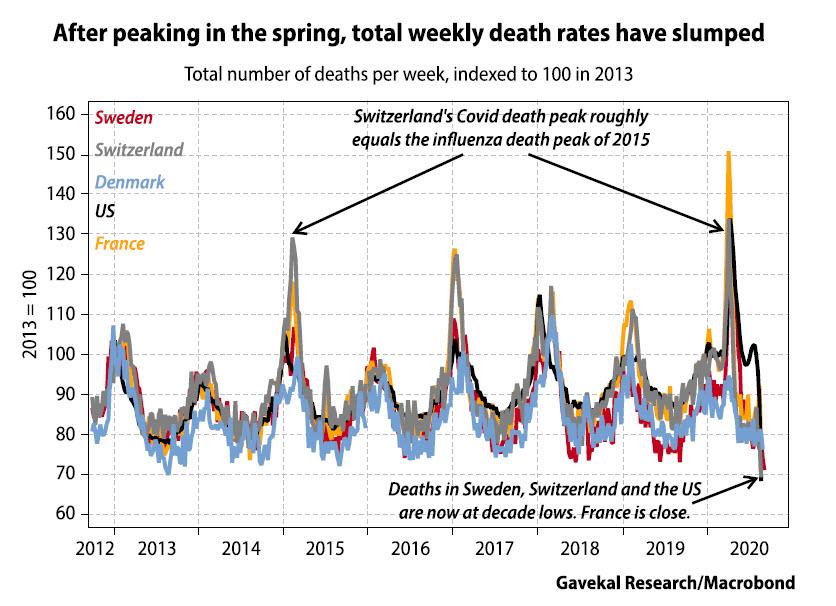 Aside from imposing a preventative early shutdown, the various differences in policy responses seem to have had little impact, neither reducing nor multiplying fatalities. This seems partially to vindicate the Swedish position that taking away civil liberties and shooting your economy in both feet made little sense, whether on human, economic, political or social grounds. The only exception appears to be if you do all these things very early on in the evolution of the disease. As the example of France (or the US, or the UK) shows, lockdowns do not appear to work if done too late.

Another important point to highlight is that the disease has been (but no longer appears to be) a potent killer of old folk, but has broadly left children and working-age adults unaffected. The charts below show the data for France, but the data for other major western countries look broadly the same.

1). Thankfully, there is genuinely no sign that the Covid outbreak has had any impact on weekly deaths among French children.

2). There also seems to be no surge in deaths among France’s working-age population (most people in France, at least those that do not work at Gavekal, tend to retire at around 60). 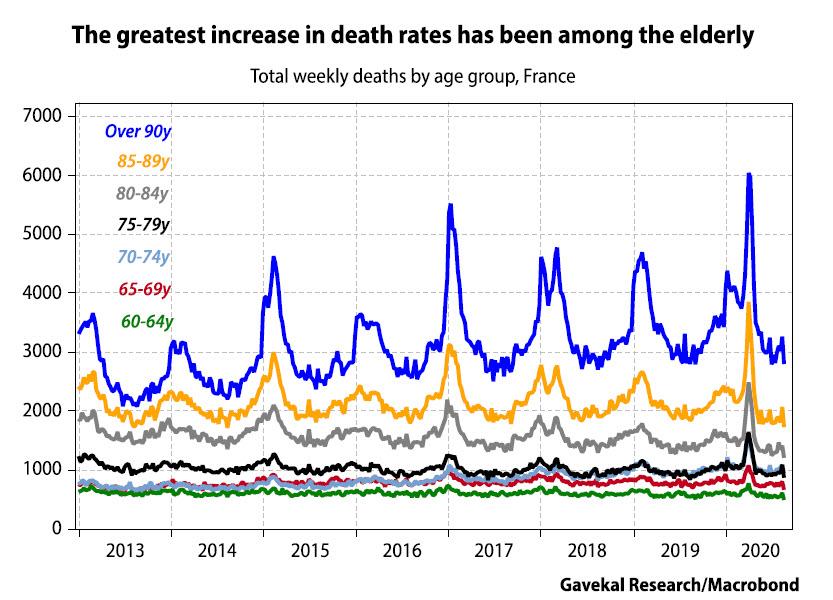 3) This means that the great surge in deaths occurred among retired folks. As the chart above makes clear, the statistically meaningful peaks in death rates occur in the 70-90-year-old age brackets, with the largest increase in deaths occurring among those aged over 90 (but that appears to be a feature of every winter).

So, given that death rates are now at long-term lows, and that the disease only seems disproportionately to kill folks coming to the natural end of their lives, why are policymakers still bickering about the reopening of schools (the UK), whether restaurants should be allowed to welcome patrons (New York), whether kids should be forbidden to go trick-or-treating this Halloween (Los Angeles), whether organized sports should even take place, and over the resumption of a dozen other everyday activities?

1) The first possible explanation is that policymakers are consciously making the choice to protect the old, even at the economic expense of the young. And they are doing this out of political calculation, because old people are more likely to vote than the young. However, this explanation runs counter to Hanlon’s razor, which states: “Never attribute to malice that which is adequately explained by stupidity.”

2) The second possible explanation is that policymakers, having stumbled into this crisis, have now seized on the Rahm Emmanuel dictum “never let a good crisis go to waste.” For the last decade, lackluster growth across the western world has led to events as unfortunate (for policymakers) as the Brexit vote, Donald Trump’s election, the rise of the French yellow jacket movement, and the rise of the AfD in Germany and of Matteo Salvini in Italy. In other words, the sort of “pre-revolutionary” grumblings Gavekal warned of almost a decade ago (see Are We Entering Revolutionary Times?) are becoming ever-louder.

Disconcerted by this increasing roar, a number of policymakers have concluded that western economies are suffering from a lack of government intervention, combined with a shortage of fiscal spending, and insufficient money-printing. But cometh the crisis, cometh the moment to embark on the sort of Keynesian orgy Anatole has lately been applauding (see Why I Was Wrong To Turn Bearish and Why I Was Right To Turn Bullish). If to a hammer every problem looks like a nail, then to a large section of western policymakers, the answer to every problem increasingly seems to be more money-printing and more money-spending.

Of course, the real problem may not be Covid, but something else entirely. But then policymakers will use the pandemic as the pretext to embark on policies to fix the “something else”. This means they need to keep Covid humming in the background. How else could they justify the gradual introduction of some form of universal basic income funded by modern monetary theory or MMT (the magic money tree)? Combine this with a healthy dose of Parkinson’s Law at work, and governments have little incentive to walk back on any of their panic-mongering. Now that government commissions have been formed and funded to deal with the pandemic, are these commissions going to be in any rush to declare the pandemic over? Or are they more likely to insist that Covid remains a major threat, and that they need more funding to counter it?

3). Finally, the third and most likely explanation is that western governments were panicked into taking dramatic decisions. This panic was likely driven partly by the increased weight of social media in decision-making. Not that the absence of social media in the early years of the 21st century helped the US government take the right decisions in the aftermath of 9/11; the invasion of Iraq was one of the greatest policy failures in a generation. Now it is likely the Covid lockdowns will rank alongside Iraq in the policy failure “hall of shame”. We know from Adam Smith’s remark that “there is a great deal of ruin in a nation.” But at what  point do repeated policy failures start to take their toll?

Staying with the Iraq analogy, one sure giveaway that policymakers realize lockdowns were a mistake is their insistence that they will not go down the full lockdown path again. And they say this even as they argue that the first lockdowns were essential to save countless lives. To me, this sounds a lot like Tony Blair’s insistence that the Iraq war was necessary, even as he claimed that if he had to make the same decision over, he would not send troops to Iraq again.

Another way in which the Iraq parallel may be appropriate is that policymakers do not know how to get out of the mess they’ve created. By invading Iraq, the US and the UK got involved in a war they soon found they could never fully “win”. And it was a war that drained large amounts of blood and treasure, at least until the US government decided to turn its back, and move on to the next thing. Today, policymakers face a similar problem: how can they declare victory over Covid and move on? Having stirred up fear and paranoia to new heights (dwarfing fears that Saddam Hussein could unleash chemical weapons against Europe), how do they now walk the fear back?

All this brings me to three possible conclusions:

My fear is that most Western countries, including my own—France—are now heading firmly down this third avenue: continued lockdowns, at the risk of engendering ever more contempt for government institutions. To put it simply: for politicians to pursue policies that ever-growing proportions of their populations are bound to reject is bad politics. We saw that much in last weekend’s yellow jacket demonstrations in Paris.

Still, against this bleak assessment, the one saving grace has to be that in most Western countries, today’s “swing voter” happens to live in the very countryside and second tier manufacturing cities that seem most inclined to reject the Covid-related laws handed down from on high. The hope has to be that democracy will continue to work, and that the policymakers who, like bad money managers, refuse to cut their losses and instead continue to “double when in trouble” will eventually find themselves fired at the ballot box.

In Major Policy Shift, US Pulls Out Of Syria Ahead Of ‘Imminent’ Turkish Invasion

One Trick Pony: The Fed Is Pushing On A String