The covid-related shutdowns were expected to result in unprecedented economic devastation, and for the most part they did, although that as bad as the US economy suffered in Q1 and Q2, it would have been far, far worse had the government not stepped in. Recall that as DB’s Jim Reid pointed out in July, this has been the “strangest recession in history“, one defined by a surge in personal income – very much unlike the usual collapse observed during recessions.

The reason for this is simple: as we explained a few weeks prior to Reid’s report, the massive fiscal stimulus unleashed by the US government led to the biggest surge in personal income in history… 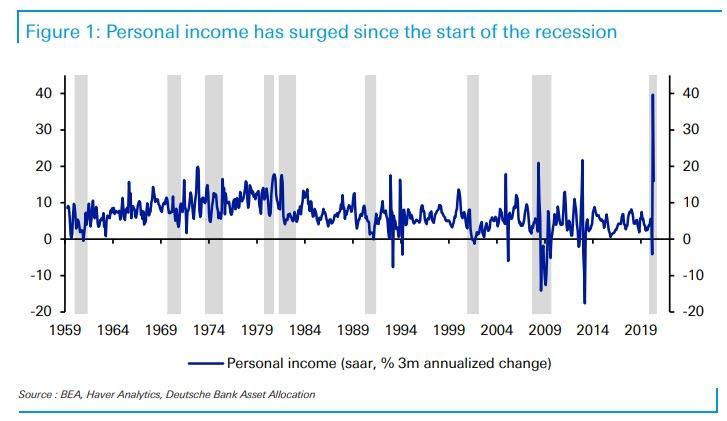 … making government transfer payments an unheard of 30% of all personal income! 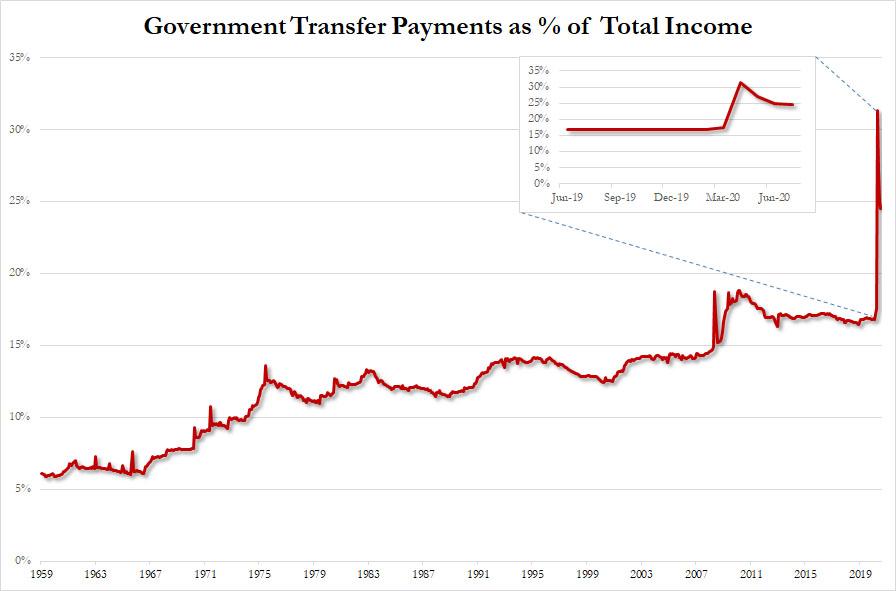 Putting that number in perspective, in the 1950s and 1960s, transfer payment were around 7%. This number rose in the low teens starting in the mid-1970s (or right after the Nixon Shock ended Bretton-Woods and closed the gold window). The number then jumped again after the financial crisis, spiking to the high teens. And now, the coronavirus has officially sent this number into the mid-20% range, after hitting a record high 31% in April.

So for all those who claim that the Fed is now (and has been for the past decade) subsidizing the 1%, that’s true, but with every passing month, the government is also funding the daily life of an ever greater portion of America’s poorest social segments.

Of course, many won’t object to such reliance on the government: after all “welfare for everyone” means more money for doing nothing (and if the Fed gets its way and it can deposit digital dollars directly, it means much more money – all with the intent of inflating away the debt).

The problem is that should this firehose of benefits slow – or close completely – the economic collapse that was mitigated drastically thanks to the covid fiscal stimulus, will come back with a horrific vengeance. Alas, with Congress gridlocked on a 5th fiscal stimulus round, and the economy clearly rolling over as we warned one month ago following the July 31 fiscal cliff which led to a collapse in spending among people who receive unemployment insurance…

… the result of continued inaction could be catastrophic. Here’s why.

As BofA writes this morning, the Brookings institution regularly updates a model that estimates the impact of fiscal policy— Federal State and Local and “automatic stabilizers” —on GDP growth. The impacts depend on both the “multiplier effect” of each action on spending and the lags. For example, the model assumes that people spend 90 cents out of every dollar of unemployment benefits, but that the “propensity to consume” for a number of other programs is much lower. After all a lot of the stimulus funds went to households and firms that are not in distress. Hence the surge in the savings rate.

And, as the chart below shows, according to their estimates, stimulus resulted in a huge 14.1% boost to GDP growth in the second quarter. Since actual GDP fell by 31.7% this implies that the stimulus offset almost a third of the shock to the economy (= 14.1 / (31.7 + 14.1)). It also means that without stimulus, the GDP collapse could have been nearly 50%! 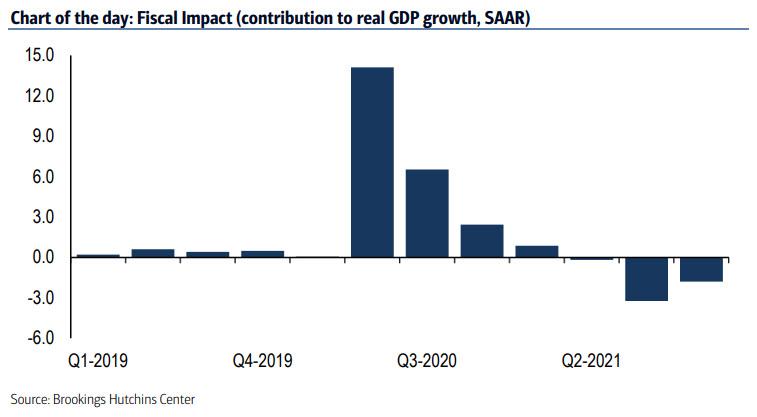 So far so good, but while the record stimulus kept the party going until now, the stimulus is rapidly fading and turns negative starting in the second quarter of next year.

It gets worse: as BofA chief global economist Ethan Harris writes, “the Fiscal Impact data also reminds us of the dangers of policy gridlock coming out of a major recession. The last recession also featured a huge fiscal stimulus—the $831bn (5.8% of GDP) American Recovery and Reinvestment Act of 2009 (ARRA). However, that proved to be the one and only stimulus package.”

As a result, Democrats lost the House in 2010 as a wave of “Tea Party” Republican’s came into the House, freezing discretionary spending. From the end of 2010 to the end of 2015 fiscal policy sliced an average of 1.0% off of GDP growth. The  result was a slow recovery, chronic low inflation and sustained super easy Fed policy.

Needless to say, Americans want more, and as we reported earlier this week, a Gallup poll found that 90% of US consumers demand a new stimulus, while blaming republicans and democrats equally. Meanwhile, as Harris adds, polls suggest that gridlock is one of the more likely outcomes in this election, with Democrats taking the House and White House, but Republicans retaining the Senate; that is also BofA’s baseline forecast. At the same time, Senate Republicans have already begun pushing back against more deficit financed spending, and that is happening before an election and with a Republican President who wants a package.

Naturally, Senate republicans may be even more resistant to deficit spending after the election, particularly if there is a Democrat in the White House. The problem as the final chart shows, is that absent a new stimulus, not only will the delayed aftereffects of the existing stimulus come back to haunt the economy… 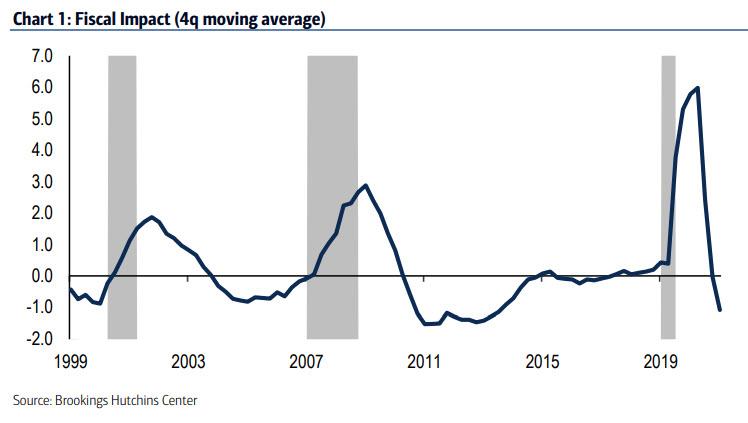 … but the lack of new spending will result in a massive double whammy crashing the economy in 2021, which averted a full blown meltdown in Q2, but will find itself scrambling in the coming quarters as the mother of all double dips emerges, and which incidentally is also why the market has been sliding for the past two weeks as the reality of an indefinite stimulus-free future looms all too real.

What (Other) Economists Think About Democrats’ Education Plans