Authored by Adam Andrzejewski via Forbes.com,

Last week, in a public relations stunt, the mayor announced a one-week unpaid furlough of himself and 494 employees within his office – a taxpayer savings of a paltry $860,000.

So, how did the city get so deep into trouble? 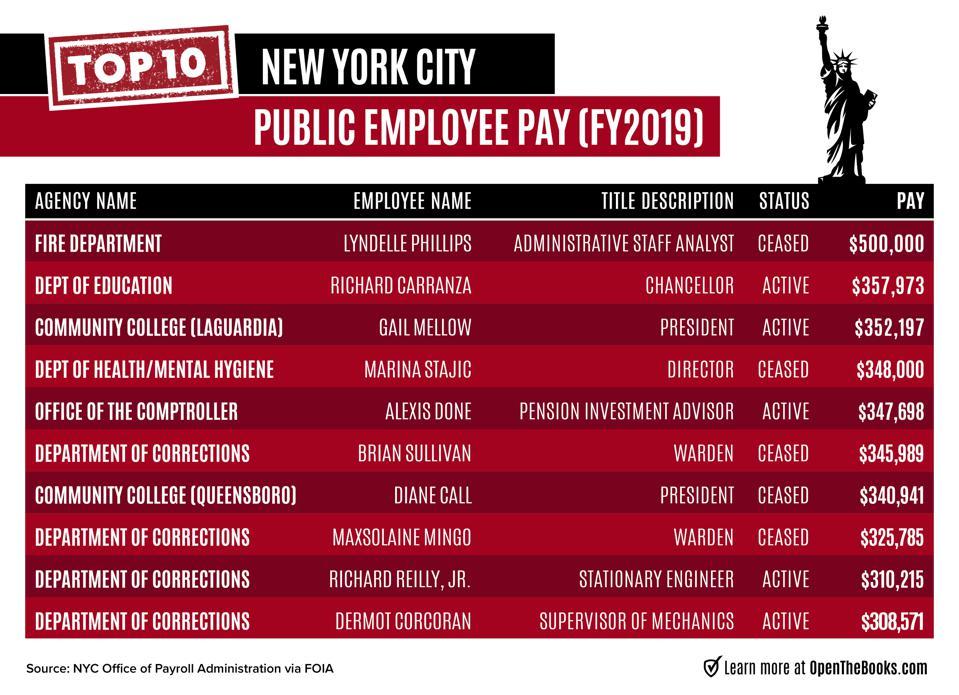 However, 592,432 people pulled a paycheck at some point last year at a total cost of $29.5 billion. (This included base salary, overtime, and “other pay,” but not healthcare or pension benefits. Those perks add 30-percent.)

Mayor Bill de Blasio’s base salary was $258,541 plus free rent at Gracie Mansion and regular police-escorted trips to the gym – even as he closed schools, restaurants, and gyms.

First Lady Chirlane McCray, de Blasio’s wife, works within the Office of the Mayor as a volunteer. However, fourteen city employees aid McCray with salaries that cost taxpayers $2 million per year.

McCray’s aides included senior advisors, communications advisors, and a policy director along with a chief of staff, two deputy chiefs of staff, a press secretary, speechwriter, videographer, and others, according to news reports.

(The mayor responded for all agencies – review the comment at the end of this column.)

Last year, over 50,000 educators earned a six-figure salary, including 37,324 teachers and substitutes.

The Police Department (NYPD) payroll included 59,970 employees last year, and nearly half, or 26,018, made six-figures or more. Included in the cost was $728 million in paid overtime.

However, only one police officer was in the top five NYPD most highly compensated.

Four “stationary engineers” – employees who operate industrial machines – led the payroll. Thanks to excessive hours and lax rules, these workers made between $84,850 and $101,740 in overtime. Stationary engineer Daniel Boyne was the highest paid person in the department ($261,682).

The department also created another kind of fire when it fired the whistleblower who discovered an alleged affair between the previous commissioner and a staffer.

Former administrator Lyndelle Phillips sued over an allegation of unlawful termination and settled the lawsuit last year. She collected $500,000 in back pay in 2019 and became the highest paid person on the entire city’s payroll.

Despite a city workforce of 331,000, the rats outsmarted the bureaucrats. 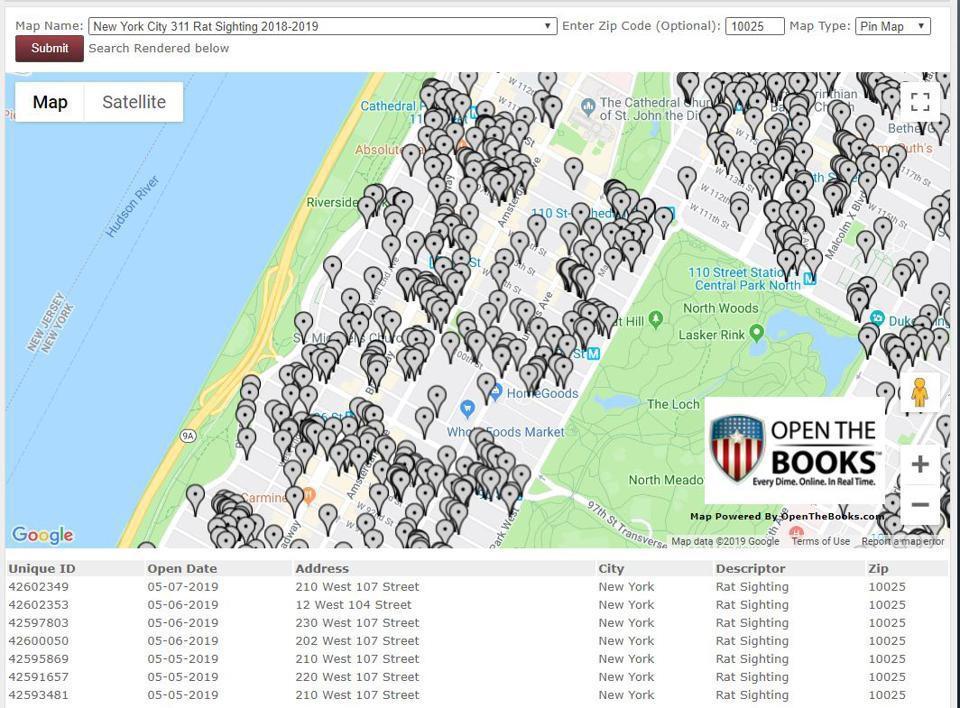 Mapping rat sightings in NYC since 2010.

The chair of the Human Rights Commission (HRC) Carmelyn Malalis made $222,990 last year. By comparison, the top paid staffer at the federal Equal Opportunity Commission made $189,600 and the U.S. Attorney General made $199,700.

However, in a strange twist, the HRC doesn’t pay their interns. While ethically and legally questionable, the internships are available only to students privileged enough to attend college who can work a minimum of 112 unpaid work hours over a four-month period.

Maybe the HRC should investigate its own agency.

In 2019, city workers claimed an extra $1.9 billion by working 32 million hours of overtime — an average cost per hour of nearly $60. This allowed some workers to double and triple pay.

The Housing Authority provided a justification:

“NYCHA has been focused on improving productivity and delivering the highest level of service to our residents, and we will use all the tools at our disposal, including overtime.”

The Administration for Children’s Services allowed up to 88-hour workweeks.

“Other” pay amounted to another $1.1 billion across the workforce. Union negotiators created all kinds of other pay buckets – including sick and vacation days, per diems, reimbursements, shift differentials, civil service and career development, etc.

Today, New York City is in serious financial trouble as the coronavirus lockdown, riots, looting, and escalating crime caused its wealthiest residents to flee. State and federal lawmakers have the option to bailout the city or force cuts to what critics say is a bloated payroll.

Not surprisingly, the unions are stalling until after the 2020 elections.

Harry Naspoli, head of the Municipal Labor Committee – a coalition of the city’s 110 unions – said there is no place left to cut.

Naspoli is waiting on the election. “After the election, who knows, there might be a whole new atmosphere in Washington.”

The message is clear: New York City wants Congress to bail them out.

Note: The Mayor’s office responded on behalf of all city agencies to our request for comment:

“The de Blasio Administration has proved for years our ability to be fiscally responsible and prepare for adversity. That includes increasing our reserve levels to record levels, saving billions of dollars even when revenue was strong, and establishing a rainy day fund, something no other Mayor could accomplish. Our track record speaks for itself.”

Israel “Shocked” After Germany Warns Jews Not To Wear Skullcaps