Helicopter Money And The End Of Taxes

Helicopter Money And The End Of Taxes

Rather than right the ship, the “easy fix” is to distribute “free money”–not just to billionaires and corporations but to everyone.

The system of collecting taxes and distributing the dough is a zero-sum game: each dollar of tax revenue paid by someone and given to someone else is one dollar that the taxpayer will no longer have to save or spend. Meanwhile, the recipient received a dollar that would not have been available without taxes.

State and local governments are still bound by this zero-sum game except for infrastructure spending funded by the sale of municipal bonds. These bonds are debt and must be paid back with interest. But as a general rule, the general funds of cities, counties and states are zero-sum: they can only spend what they collect in tax receipts.

As a result, the feeding frenzy at the public trough has winners and losers: taxpayers who receive fewer benefits than they pay in taxes are the losers, and residents / enterprises who get subsidies, tax breaks, entitlements, benefits in excess of what they paid in taxes are the winners.

Zero-sum: every corporate or individual welfare queen / king that mooches off the public trough as a result of skims and scams (gaming the system, lying, lobbying, legalized looting, etc.) deprives a legitimate recipient / program of scarce tax dollars, or deprives the taxpayers of a tax cut.

The federal government has no restraint. The federal feeding trough can be refilled by deficit spending, i.e. selling Treasury bonds and blowing the proceeds on essentially limitless skims and scams.

Taxpayers naturally resent the skims and scams their hard-earned tax payments fund. Politicos are dimly aware of this resentment (dismissed as evil populism by the status quo’s apparatchiks) and so they naturally seek to defuse this threat to their own skims and scams by giving free money to everyone and not just to their super-wealthy donors (in the form of bailouts, subsidies, tax breaks, no-bid contracts, etc.)

We’ve already had a taste of free money for everyone in the $1,200 giveaway earlier this year. There was also talk of dispensing with the individuals’ share of Social Security/Medicare taxes (7.65% of earned income) for a limited time, but this created confusion because it was unclear if this was a temporary measure that would be due later or an actual freebie.

Clearly, this was a trial balloon for eliminating the Social Security/Medicare tax for low and moderate income households. Why collect $1,200 in SSA taxes and then hand the household $1,200? Why not just eliminate the tax?

Declaring the first $50,000 or $60,000 of income per taxpayer as tax-free would not reduce tax revenues by much because the bottom 90% pay such a small percentage of income taxes.

If 90% of households don’t pay federal income taxes, then they have no beef with who’s feeding at the federal trough, as it’s no longer zero-sum. There will be “free money” for everyone: corporate welfare galore, no income taxes for the bottom 90%, permanent unemployment payments for the chronically unemployed, Universal Basic Income (UBI) for everyone, even the top 10% (so they get something for free)– helicopter money without limit.

As all the extremes of wealth/income inequality unravel, calls to “tax the rich” gain favor. The problem is that the super-rich have the political power to evade taxes, so the only people who will pay more will be the tax donkeys who aren’t rich enough to hire teams of tax attorneys and buy tax breaks from desperate-for-campaign-cash politicos.

The idea of countering inequality by giving everyone free money seems painless as long as the Federal Reserve can create trillions out of thin air. And the basic idea of MMT (Modern Monetary Theory) is the Treasury can create trillions without even selling Treasury bonds that accrue interest.

As I explained in The Silent Exodus Nobody Sees: Leaving Work Forever (9/23/20), all this free money (with a token giveaway to the remaining tax donkeys) will have unintended consequences:

1. The working poor who do the economy’s hard, low-pay work will find ways to leave their life of poorly paid toil behind forever.

2. The tax donkeys will have tremendous incentives to cut their work and income down to the tax-free level. Why kill yourself to pay 50% of what you earn as taxes?

What kind of economy will we have when all the hard work becomes optional and a consequential percentage of the tax donkeys effectively “lay down their burdens”? All the “free money” will go to consumption, not production, and so the purchasing power of the “free money” will erode very rapidly.

The intrinsic unfairness of the status quo is undermining the willingness to keep contributing to it. Rather than right the ship, the “easy fix” is to distribute “free money”–not just to billionaires and corporations but to everyone.

Simply put, work no longer pays. What pays is turning companies into debt-zombies to buy back shares and milking America’s monopolies. (Contributor A.P. outlined how the system really works: Our Wile E. Coyote Economy: Nothing But Financial Engineering (6/11/20)

All those who believe this is a permanent, stable system will get a nice hard chair at the banquet of consequences. The dominoes are falling but distractions abound. 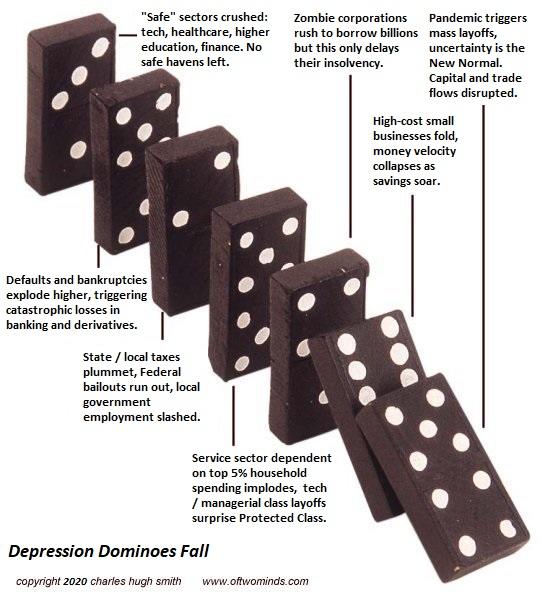 Will You Be Richer or Poorer?: Profit, Power, and AI in a Traumatized World
(Kindle $5, print $10, audiobook) Read the first section for free (PDF).