One of the core tenets of MMT, or Magic Money Theory, is that a nation which prints its own fiat money can never go broke or be insolvent (unless a political decision to do so is taken). Well, that may be true, but in Venezuela things appears to have taken an unexpected detour into one of the more grotesque circles of economic hell as the hyperinflating country proceeded to print its way out of its endless economic crisis.

So much so that according to Bloomberg, Venezuela is now importing 71 tons of paper from Italian money printer Fedrigioni (majority owned by US Private Equity giant Bain Capital) which it will use to print new bills with the highest, 100,000 new bolivar, denomination yet. In dollar terms: each new banknote is worth about 23 cents, courtesy of the raging hyperinflation that has been sweeping the nation for the past 6 years. 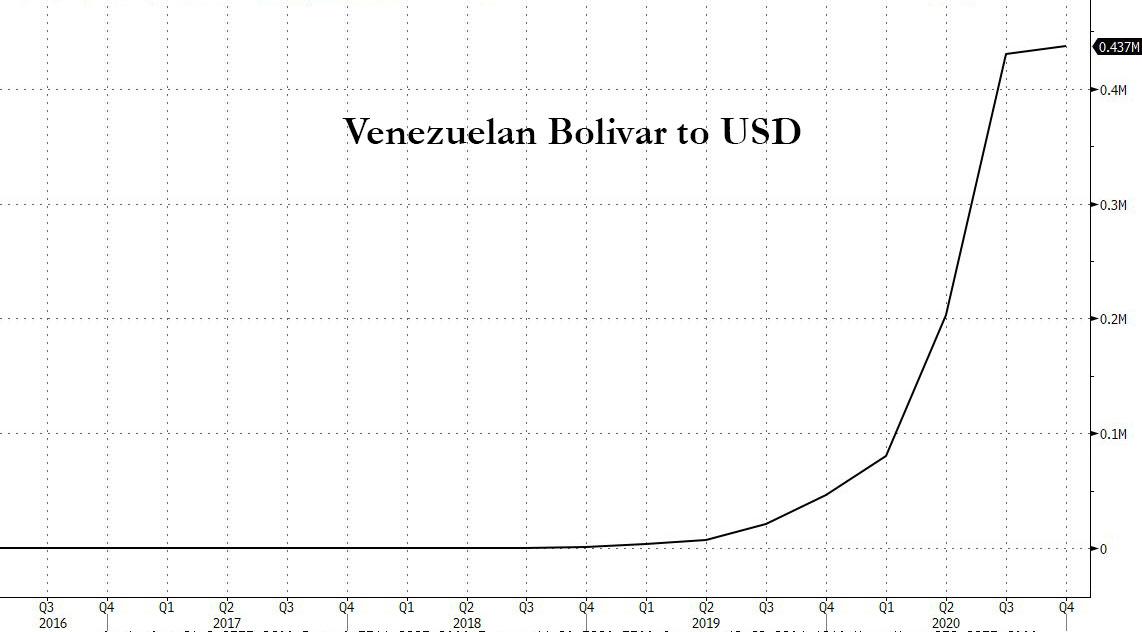 One recurring problem for Venezuela, which as we reported back in 2016 used 36 Boeing 747 cargo planes to deliver a batch of then freshly printed (and shortly thereafter, worthless) currency, is that by the time its currency is printed, it is worth almost nothing.

Sure enough, as Bloomberg notes, the need for ever larger bills and constant devaluations in Venezuela is a direct result of an ever weakening currency and hyperinflation that now runs at over 2,400%, meaning that paying for a cart full of groceries now literally requires a bag of cash. The 100,000 bolivar bill would match the biggest bill ever printed in Venezuela, one made two years ago during the days of the bolivar fuerte (the latest version of the currency is called the sovereign bolivar). The central bank is considering introducing even larger denominations down the line, which will lose their value just as fast.

What is truly absurd is that Venezuela has reached the point where it can’t even afford to pay its money printers: it ceased using De La Rue after racking up massive debts, at which point it turned to a state-owned money printer in Russia to purchase 300 million of new bills. Considering that Venezuela is now using an Italian money printer, leads us to conclude that even Putin turned down the Maduro regime.

It gets worse: due to the total economic collapse in Venezuela, the national mint has to overcome a series of additional hurdles to introduce the new bill. These include reduced staffing due to the pandemic as well as a shortage of ink and technical challenges brought on by missing parts and frequent power outages have delayed attempts to get the printing equipment running.

According to Bloomberg, the shipment of bills will also be the last from the Bain-owned Fedrigoni, as it fulfills a contract signed in 2018, a year before Venezuela’s central bank was sanctioned by the U.S. in efforts to cut off Nicolas Maduro’s regime from the global financial system.

After this shipment it is unclear if Venezuela can even afford to buy new currency as it slowly transitions barter. Many won’t notice: in 2020 the country’s economy will be in its seventh straight year of recession, forecast to shrink another 20% due to the coronavirus lockdown and the collapse of oil revenue. Previous attempts to bring stability to the currency by cutting off zeros and printing new bills have failed. Sadly for the Maduro regime, the can-kicking game is almost over as the socialist regime will soon run out of ink to run its own printing press.

And with the local currency increasingly used only for toilet paper, local have been turning to crypotcurrencies and U.S. dollars, with Ecoanalitica estimating that some 60% of all purchases are now done using greenbacks.

Finally, for the benefit of its advocates, this is what MMT is always reduced to in the end: Venezuela has been suffering from hyperinflation since 2017, crushing the ability of most Venezuelans to purchase even the most essential goods, much less save. The average family requires more than 100 times the official minimum wage to meet its basic needs. And since the locals don’t have the firepower to take on the Venezuelan military which remains in Maduro’s pocket, this particular Latin American socialist paradise will remain a living hell to the local population for years to come.

A Patriot’s Dying Words: “Do Not Let Liberty Expire With Me Today”

The American Revolution – The Sequel