At What Temperature Do Americans Stop Going Out To Restaurants: Here’s The Answer

At What Temperature Do Americans Stop Going Out To Restaurants: Here’s The Answer

Since the start of the pandemic, various consumer services such as dining have moved outdoors to reduce the risk of virus spread.

Services that have moved outdoors to avoid closure include everything from exercise classes to movie screenings, but dining is the most economically important since it accounts for about 5% of total consumption and 3% of GDP. In New York City, for example, the share of restaurants approved for outdoor dining in public areas has risen from less than 10% to more than 40% in just a few months, according to Goldman. 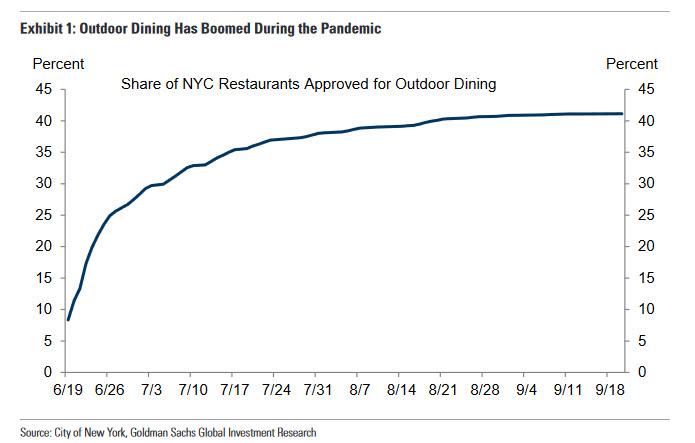 However, as the weather gets colder, consumer activity now conducted outdoors will decline much more sharply than seasonal adjustment factors expect, creating a risk of a sharp and adverse impact to consumer spending.

To assess this impact, Goldman forecasts the impact of the coming winter on restaurant spending and GDP.  Cutting to the chase, Goldman estimates that winter weather will reduce restaurant spending by 3–4% and consumption by 0.2pp during the coldest months. This translates to a 0.3% hit to real GDP growth in 2020 Q4, and a 0.1% hit in 2021 Q1, followed by a rebound as temperatures rise in 2021 Q2.

As part of its analysis, Goldman compared daily temperatures across 31 large U.S. cities with data on restaurant reservations from OpenTable. Because the reservation data are expressed as growth rates since the same day a year ago, they are already adjusted for normal, pre-pandemic seasonal trends. The results, shown in the chart brlow, find that cold weather significantly decreases restaurant bookings.

The relationship is highly statistically significant and stronger at lower temperatures. Compared to temperatures above 70°F, a daily average temperature below 40°F is associated with a 17.6% decline in seasonally-adjusted restaurant reservations. To Goldman, this implies that the negative effect of cold weather on restaurant reservations is substantially stronger now under pandemic conditions than it was in the past, and suggests that the cutoff point when there is a sharp drop in outdoor dining is when the outside temperature drops below 45°F. 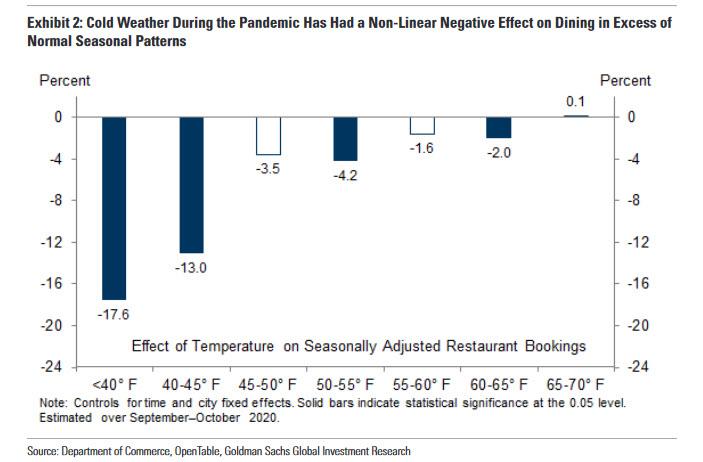 Putting it together, the implied hit from colder temperatures to seasonally-adjusted restaurant spending is shown in the chart below. Goldman estimates that winter weather will reduce restaurant spending by 3–4% and consumption by 0.2pp during the coldest months. This translates to a 0.3% hit to real GDP growth in Q4 and a 0.1% hit in 2021 Q1, followed by a rebound as temperatures rise in 2021 Q2. 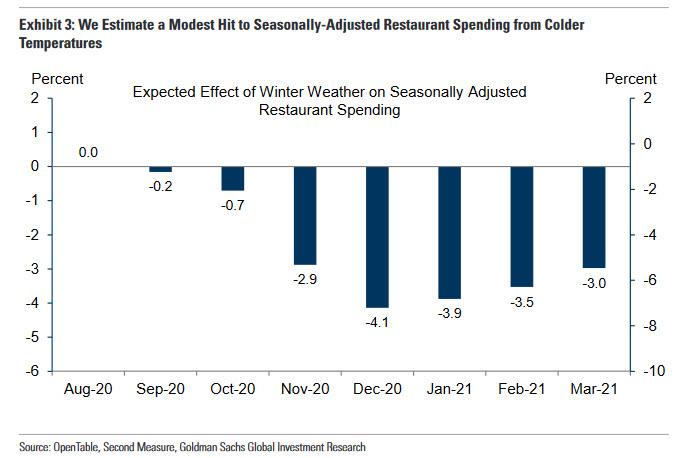 It goes without saying that the negative effect of cold temperatures on restaurant spending may become even more extreme at temperatures well below 40°F, or if you throw in a blizzard or two. The economic implication is also self-explanatory: a very cold winter could crush winter GDP.

To the upside, restaurants might find ways to adapt outdoor dining to winter weather by installing tents or heaters, moderating the negative effect of cold weather on restaurant spending. To this point, Goldman notes that Washington, D.C., recently offered $6,000 grants to help restaurants “winterize” their outdoor dining.  In addition, further relaxation of restrictions on indoor dining or increased substitution toward takeout and delivery might soften the negative effects of cold weather on restaurant spending. Alternatively, a good hedge would be to buy stock in companies that make outdoor patio heaters: they are about to see a record surge in demand.