Is The Yield Curve About To Collapse?

Is The Yield Curve About To Collapse?

We previously showed that when it comes to Wall Street bets on what the Treasury yield curve does next, there has never been greater confidence in even more steepening: as the below chart of leveraged and speculator net positions in 30Y futures shows, traders have never been more short, with the latest CFTC data showing combined net shorts in long bonds both at records with a combined net short of over 620,000 contracts. 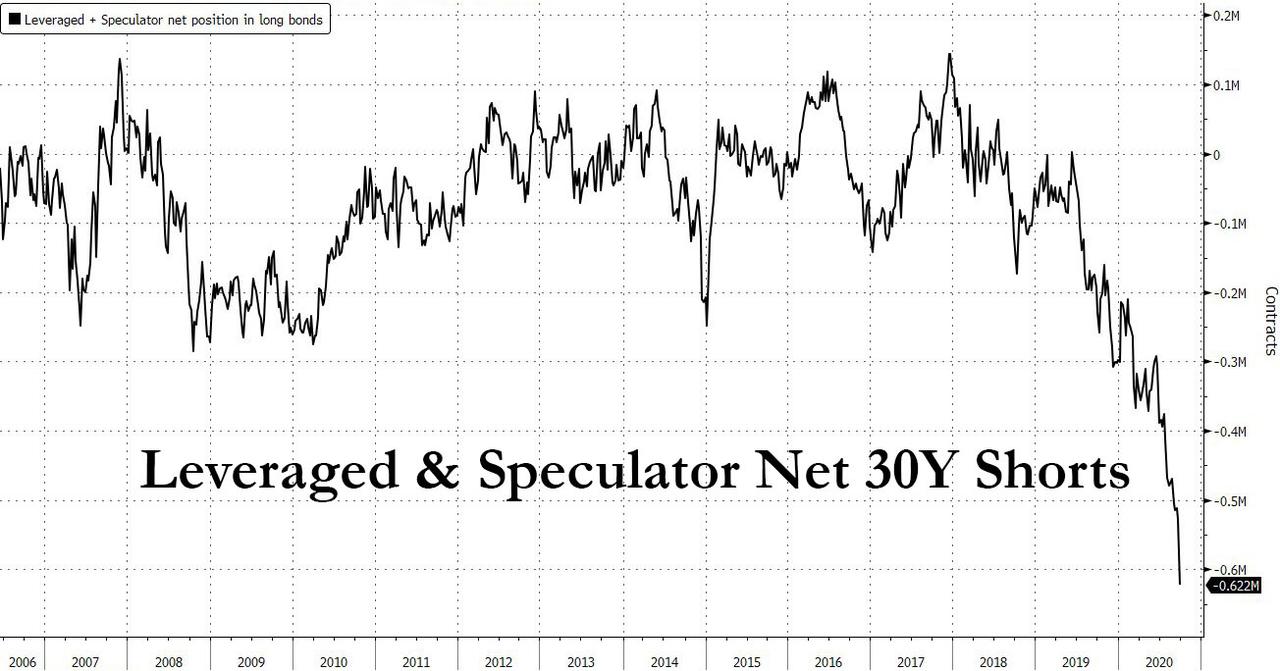 The rationale is simple: with virtually everyone is expecting a fiscal stimulus flood whether before or after the election which Wall Street is now convinced will be won by Biden – as a reminder, Goldman recently predicted that the “increasingly likely” Blue Sweep would mean up to $7 trillion in new fiscal stimulus and a surge higher in 10Y yields… 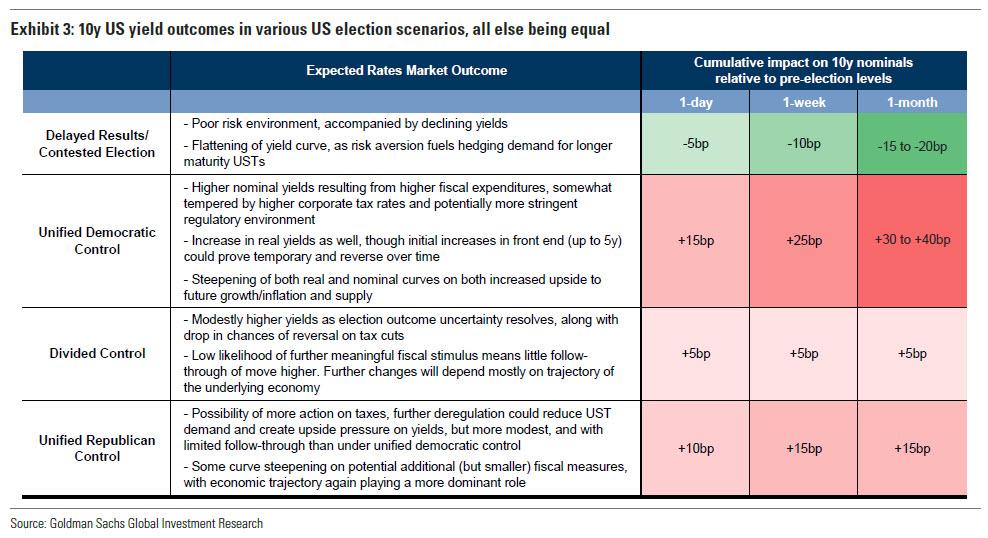 … and is aggressively betting on even further steepening, the level of short positions in long bond futures is staggering although as Bloomberg’s Stephen Spratt warns, it’s not the first time this year risks have looked so lopsided: “with almost all of Wall Street calling for a steeper curve back in early June, the 5-, 30-year spread drifted flatter over the following six weeks.”

However, to Spratt, the question is whether traders can hold on until after Nov. 3 given yield curve risk is now clearly skewed toward short-term flattening, and even a small flattening move may quickly avalanche into a huge squeeze sending 30Y yields far lower.

His Bloomberg colleague Richard Jones agrees, writing today that the recent steepening in Treasury calendar spreads “looks premature, given that material fiscal stimulus will probably be forthcoming 1Q 2020 at the earliest.” As Jones explains, since late September, 2s10s steepened to ~62bps and 5s30s to ⁓123bps. This but has gathered pace in recent weeks as a Biden victory (and potential sweeps of both houses of Congress) became increasingly likely, with Goldman pounding the drum on both as discussed previously. And, as pointed out above, the notion is that Democrats will be more open to expansive fiscal policy, especially in the grips of the pandemic.

But, as Jones cautions, “therein lies the rub” – over the next 5 to 6 months or so, before a big government aid package can be passed, “the virus will continue to be a massive public health and economic headwind. And, without an aggressive fiscal impulse during the height of an American winter, the pandemic could theoretically become as virulent and disruptive as it was 6-7 months ago.”

To be sure, there’s already signs that Covid is making a significant comeback even before the winter and “it’s hard to see that situation improving any time soon.”

Finally, Mizuho’s Peter Chatwell joins the chorus of strategists warning that a major flattening is in store, and in a note this morning warns that his strategic recommendation of US curve steepening “is currently looking crowded” adding that “the Biden clean sweep trade has become a common narrative, and looks close to fully priced given current opinion polling.”

Yet, on the flip side, there are several triggers that could see the “blue wave” priced more realistically. Meanwhile, as he further notes, this week’s heavy Treasury supply likely kept the curve artificially steep.

With that in mind, Chatwell is calling it a day on his profitable steepener reco, and is now urging client to put on “tactical UST flatteners” as he looks to capture post-supply flattening performance before re-engaging with bear-steepeners.

Any sharp flattening in the yield curve would have dramatic cross-asset consequenes, and as the Mizuho strategist says, “flattening in 10s30s is likely to have a strong correlation with risk-off trading in other markets.”

Finally, a flattener may now be the best way to “hedge” another Trump “surprise” victory: while stocks will continue rising assuming the Fed will always step in to bail them out, the real action will be in inflation expectations, and the fact that under a second Trump admin, the fiscal juice will slow down to a trickle – at least in the context of Biden’s $7 trillion – especially if covid is contained early next year.

In short, with everyone absolutely certain – and Goldman pounding the table – that the curve can only go even steeper, it is almost guaranteed that the next move in the curve will be flatter… and if there is enough momentum to spark a short covering squeeze, we just may see one of the most violent curve repricings in history.

Left-wing “terror tantrum” spoiled youth could have been stopped with a SPANKING when they were younger; now we’ll have to use FORCE