Inflation Measures Are Meaningless Without House Prices: But Their Use Produces Huge Distortions

Inflation Measures Are Meaningless Without House Prices: But Their Use Produces Huge Distortions

The spotlight on inflation has never been higher as the Federal Reserve made it the primary focus of monetary policy. That means price statistics must be relevant to the needs of policymakers as accurate price measures are necessary for monitoring economic developments and the effectiveness of monetary policy.

But published consumer price measures are meaningless. That’s because they don’t include house prices, even though a majority of households have opted to own rather than rent. There is no way of effectively measuring inflation experienced by people if house prices are not included. Their exclusion has caused huge distortions in reported inflation, the economy, and in finance.

In the past 20 years, the Office of Federal Housing Enterprise Oversight (PFHEO) house price index rose nearly 100%, but the owner’s rent index in the Consumer Price Index (CPI) rose by a little less than 70%. That’s a large divergence. 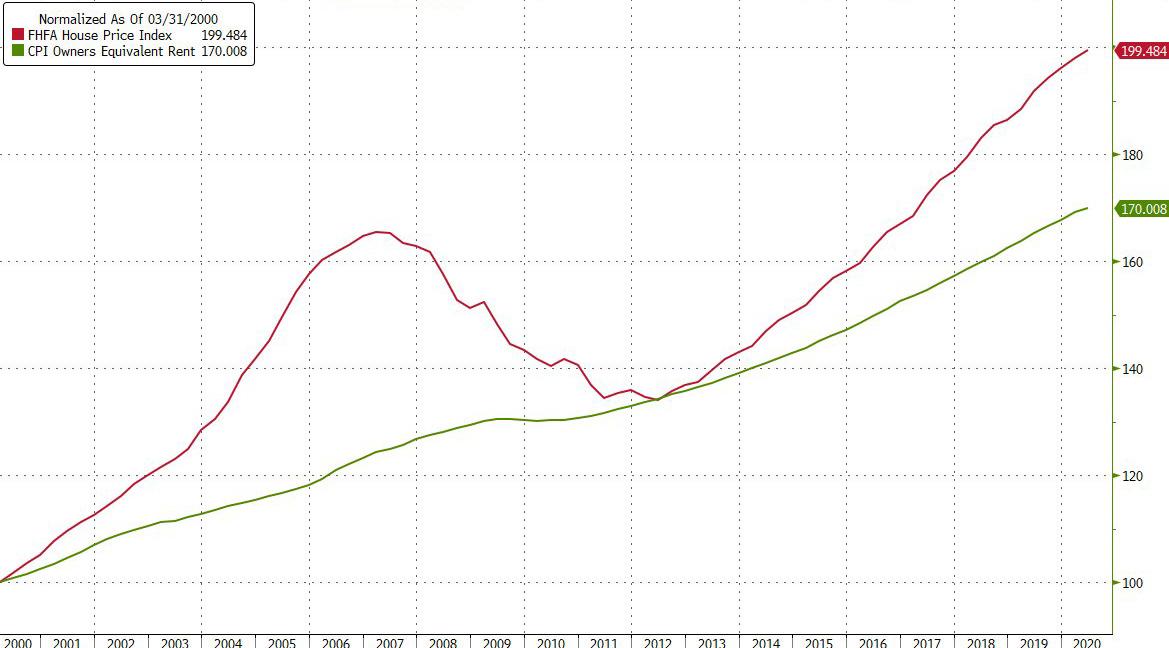 But the divergence is not even across the economic cycle. House prices are pro-cyclical, while rents are counter-cyclical. That means the cyclical rise in inflation is understated, a critical time for policymakers as they are trying to gauge underlying inflation pressures and the effectiveness of monetary policy.

Research at the New York Federal Reserve Bank found that if house prices were part of the CPI in the 2000s economic expansion it would have had an “enormous difference “ on reported inflation. According to the New York Fed research staff, replacing house prices for owner rents, the CPI would have averaged 4% per year, and core inflation around 3.75% in the 2000s growth cycle, both roughly one and one-half percentage points above reported inflation.

It is hard to imagine that policymakers would have kept official rates so low during the 2000s expansion, and even in the 2009 to 2019 cycle, had inflation measures included house prices.

Accurate measurement of inflation is not merely an academic issue. Huge distortions can occur in the economy and finance if price measurement paints an inaccurate reading on underlying inflation.

Starting in 1999, the Bureau of Labor Statistics stopped using house prices in the CPI, while in the past two decades, the Federal Reserve has employed an informal and formal targeting of inflation as their policy tool. It is not a mere coincidence that the gap in income and wealth inequality has widened during this period.

According to the Federal Reserve Survey of Consumer Finances, in the last 20 years, the median value of the net worth of the top 10% has more than doubled, while the gains for other income cohorts have barely increased. The uneven outcomes reflect the disproportionate ownership of equities. The top 10% hold 90% of all equity investments. Median income gains were equally skewed. The top 10% recorded outsized gains, helped by large capital gain income.

The inaccuracies of price measurement have gone on far too long. As reported, price statistics no longer ensure the objectivity and accuracy that is needed.