Authored by Bill Blain via MorningPorridge.com,

“I felt I was trapped inside an erupting volcano with a howling dog..”

Its probably better not to bother watching the news this morning. It’s all just a bit too depressing.. Nothing sums up the utter sadness of this crisis as sadly as much as the elderly couple with tears in their eyes, banned from hugging each other because regulations say they must remain isolated. Judge society by how it treats its weakest members. Our society has clearly lost the plot.

It begs the question: is our current system of government capable? 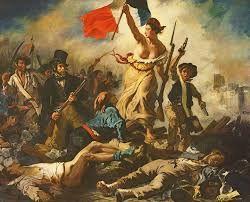 It’s an important question. Without political stability – markets and economies are doomed.

There is lots of noise re the US elections, the number of new virus cases (1 million around the globe), regulatory threats to the Tech sector, the rising risks of a second wave of Covid-recession and job losses, and increasing geopolitical tensions. It’s all big-picture stuff..

However, it’s at the individual level where things really start to happen.  It’s a single pebble shifting that triggers a landslide. It’s the butterfly flapping its wing…. You know the story. Maybe the tipping point is a worker who just lost their job in a cinema because some exec decided to delay a film release. Or maybe it’s in the petty bureaucratic pain of trying to deal with a bank, or get an appointment to get your eyes tested. (I’m told the number of home workers suffering eye strain has gone through the roof.)

As we get more and more frustrated and annoyed, there is an increasing sense that nothing really works or makes much sense anymore.  Our anger and sense of injustice is rising.

Whoever shouts loudest seems to get all the attention.

Things just ain’t working.. Nothing seems to make sense any more.  We are losing faith in decision makers.  Let me illustrate declining confidence with a true and very current story:

Let’s say the biggest crisis facing the planet isn’t Covid, but climate change. Let’s all agree on the need to cut carbon emissions and focus resources into renewable power. Excellent. No problem with that.  To make renewable power you need to replace our fossil fuel economy and build new infrastructure; wind farms, solar arrays, nuclear power stations, etc – and build these things you need steel.

To make steel you need Metallurgical Coal. At the moment, Europe gets the bulk of its Met Coal by ship from Australia or the Americas by ship, creating millions of tonnes of CO2 carbon miles, while transport costs push up the cost of making steel.

There is a shovel-ready new UK coal mine ready to be dug.  It will produce high quality metallurgical coal.  It will be transported to European steel mills at a fraction of the cost and carbon miles of imported coal.  The mine will create 500 new jobs in a depressed part of the UK. It’s a win-win-win; cutting CO2 emissions, cutting steel prices and creating jobs.  The deal had the approval of local politicians, the electorate, local “Red Wall” MPs and passed every stage of approval.

Coal is not popular.  Most people aren’t aware there is a distinction between dirty polluting thermal coal, and the high-grade coal needed for steel.  The project attracted the ire of Green campaigners and Extinction Rebellion. They said it will have a detrimental effect on climate change. How?  It would have reduced CO2 emissions.  It would have cut the cost of producing renewable power.

Green campaigners make a lot of noise – they shout loudest.  Scared governments don’t like noise.  Despite all the positive, environmentally logical and economic positives of the deal – Government has stepped with a “hold” order to review the decision again, creating delay. It creates uncertainty on funding the project – a critical aspect of any major investment project.  (Let me declare an interest – it’s a deal I’ve been working on… and I won’t even mention the number of investment managers too scared to even discuss the deal at investment committees just because its coal. There is good and bad coal.)

The big picture is even worse.

Confidence in democracy has underlain the Triumph of the West these last 75 years. But today it has become creaking and strained.  Political stability is everything. Confidence in government and its ability to solve this or any other crisis is crumbling – and that will have profound social and market consequences.

If the Chinese were looking for a moment to challenge – then they could not pick a better time. Doubt, confusion and dissent has been sewn across the West… “The supreme art of war is to subdue the enemy without fighting…” as Sun Tzu famously emblazoned on his T-Shirt.

The Coronavirus has become the trigger for something much larger and repressed that’s been brewing over the last two decades. The degree to which society has become imbalanced by the distortions created in markets has not got enough column inches. Ultra- low interest rates and Quantitative Easing were supposed to unlock growth and jobs – but have ended up fuelling corporate greed and income inequality. Governments are dithering while electorates get angry.

Look at the news… and wonder how the world will cope with the 1 million new coronavirus cases announced since Friday.

Wonder about the intense, nasty polarisation in the US election, or coming up with whatever Wizard Wheeze Boris will unleash to isolate, depress the UK into economic suicide, or France’s idiot determining his electoral prospects depend on wrecking a Brexit deal to look tough in front of fishermen… etc

Wonder about the likelihood a second massive economic dip as the global economy shuffles into a new Covid ditch over the next few months. Wonder how we will cope with it.  Our politicians look hopeless.

Here in the UK, the actions of politicians over the last 6 months have created a new 3 class society:

i) there are those of us furious and angry about the botched response and pragmatic enough to understand we had to save the NHS not because of the virus, but because it was unprepared because of bureaucratic failure,

ii) there are the terminally terrified who are totally invested in the fallacy Covid is set to decimate us, and

In such angry times, conspiracies quickly take hold.. What else is government holding back…? Think of how these little pebbles are not tumbling down the hill, heedless of common sense…

If you were worried about populism after the fury at bankers being bailed out in 2008 – then be very worried now.

We first started to worry about populism as dole queues lengthened, post GFC austerity bit, and cheap politicians looked for easy targets like immigration.  We didn’t worry too much.  The Greeks elected a left-wing government and got a bit shirty about being told what to do by Europe?  Or the Spanish left started to complain about being walked all over.. And then it was Yellow Vests bringing Paris to a stand-still last year.

Or here in the UK the bright hopes of the smug Tory-Liberal alliance skidded into the brutal reality of Brexit. Or how the morally ambivalent Johnson had the choice of leading either the remain or leave factions.  And in the US – they elected Donald Trump.

Don’t think it ends there. Levels of dissatisfaction with politics will continue to rise. If Biden wins he will face worse than a dozen Mid-West crackpot militiamen. (And I guarantee some US idiot will send me a threatening email describing these guys as patriots. I say to them FROAD.)

As I’ve blogged my way through the crisis I did try to look for positive angles – how shifts in new technologies will accelerate positive transitions, the possibilities of new approaches to fiscal policy to boost coordinated growth and why sovereign debt may not be the crisis we fear, although burgeoning corporate debt is wrecking the evolutionary mechanisms of capitalism. I’ve generally been hopeful that the days of corporate excess and soaring inequality since the botched regulatory and central bank response to the 2008 crisis could still result in a positive outcome towards a more inclusive “stakeholder” capitalism – benefiting us all.

Up until recently I thought growth and capitalism would triumph over the stupidity of populism. This morning I am not so sure..