Heading into the weekend, we observed that despite the recent drift higher in the Nasdaq last week after its September correction, institutional investors remained skeptical with a near-record number of non-commercial spec shorts in the Nasdaq 100 mini according to the latest CFTC Commitment of Traders report, and after spiking to a historic level just two weeks earlier, the negative bets on the Nasdaq stubbornly persisted…

No change to Nasdaq short this week pic.twitter.com/9C1YNcs3Rn

… perhaps in response to the recent surprisingly bearish note from Morgan Stanley which warned that the tech plunge would accelerate, and which forced many institutions into bearish positions.

But it wasn’t just the painful short in NQ futures that set off today’s harrowing move higher in the Nasdaq: as Nomura’s Charlie McElligott wrote in his morning note when looking at today’s exponential “panic grab” price-action in Equities futures, “the buy flows are being driven by a legacy dynamic in SINGLE-STOCK VOL which you’re now well-familiar with, where we see massive upside call strikes suddenly back ‘in-play” on the meltup this week into their Friday’s expiration in some of those mega-cap Tech stocks (AMZN in particularly, but ADBE and NFLX as well) that traded back in August, forcing what looks to be “short Gamma” -type buying / hedging this morning from the Dealer short them in order to stay neutral.” 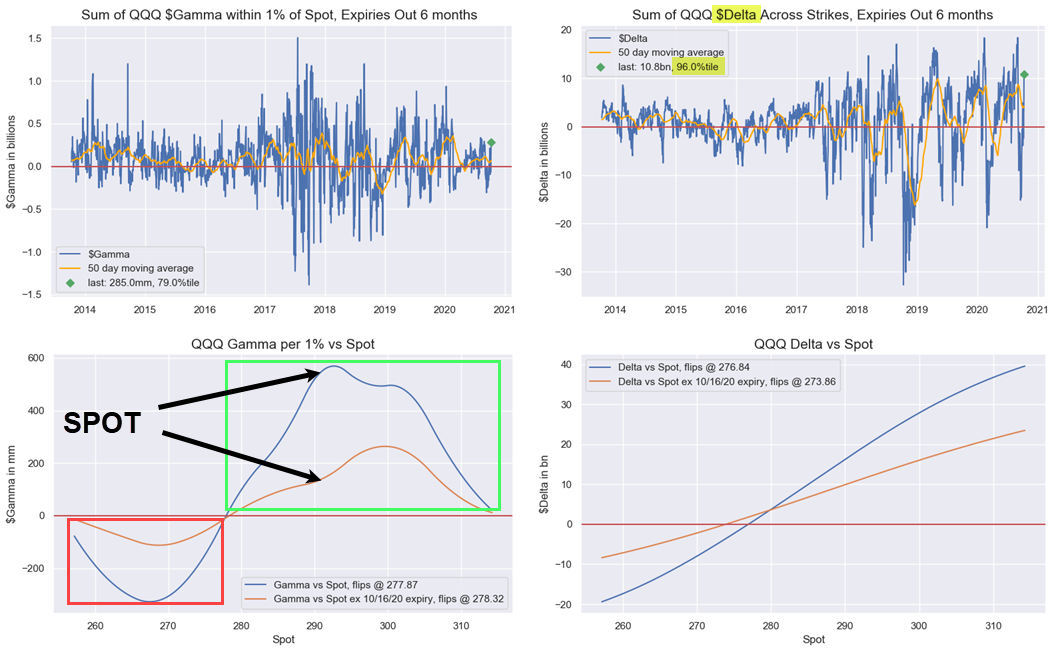 Said otherwise, the same “gamma squeeze” dynamic we observed in mid/late August when Masa Son’s SoftBank ended up buying billions in call spreads, sparking a meltup in tech names is back and just like in August, liquidity is dismal which likely means that SoftBank is back for round three (after a failed attempt to squeeze the Nasdaq higher two weeks ago).

Alternatively, if the “Nasdaq whale” so wishes dealers can again be squeezed by a rerun of the August meltup, something which we are seeing in real time today with the help of a handful of exceptionally large trades in thin markets which as JPM admits, “increase the potential for exacerbated stock moves as dealers hedge exposure.” That said, at least back in August NQ futs were well in the green, so this time we also have the short squeeze of futures traders to consider as risk explodes higher amid the concurrent gamma squeeze.

As such, the combination of a near-record NQ short and another dealer gamma short is precisely what has sparked today’s massive, 3% meltup in the Nasdaq, which paradoxically takes place even as most-shorted names can’t catch a bid. 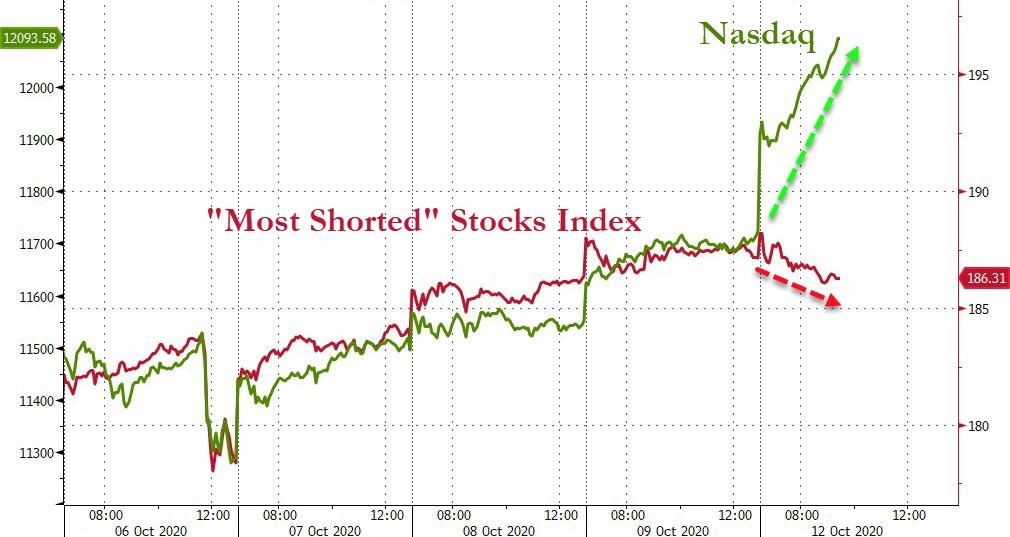 Two more considerations are adding to the bear’s pain: first a modest unwind of the recent reflation trade which traders agreed had gone too far by Friday, means selling of small caps/Russell 2000 coupled with renewed buying of tech/Nasdaq names. 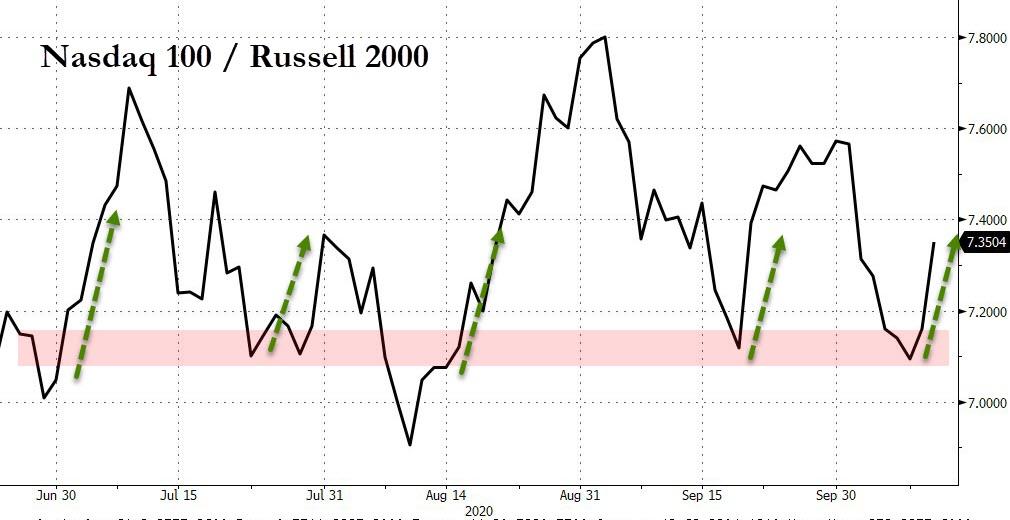 This unwind appears to have been further catalyzed by a fresh rebound in election uncertainty (contested election) as the Nov-Oct futs spread surges back to all time highs, sparking even more flows into the deflationary/tech space. 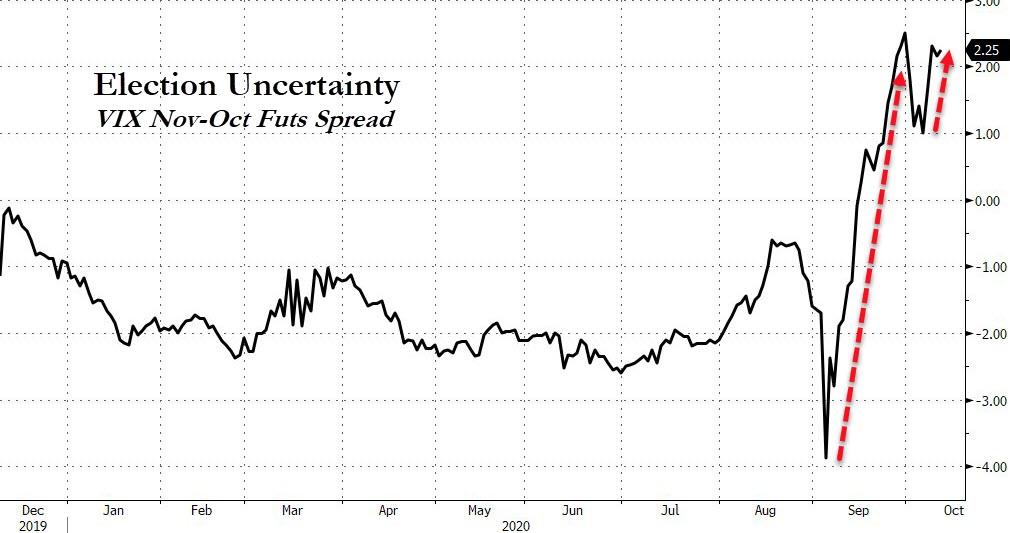 Finally, throw in Apple’s unveiling of the iPhone 12 tomorrow, which while probably will end up a dud provides even more squeeze power for the Softbanks of the world, and the furious surge in the Nasdaq has left shorts dazed and confused after a week when it seemed that value may finally overtake growth as the preferred trade over the last few weeks of the year and into the new year.