Rabobank: “Where We Stand Today In The Battleground States Is Almost Exactly Where We Were In 2016”

Rabobank: “Where We Stand Today In The Battleground States Is Almost Exactly Where We Were In 2016”

By Michael Every of Rabobank

The two got the gong this year for their work on auctions, which are all about trying to flog things on an unsuspecting public. I suspected their prize-winning work says slightly more than that. Then I saw a press summary saying their ideas “can be used to improve the allocation of respirators and PPE in future pandemics. In the early days of the COVID-19 crisis, states bid against each other for supplies, escalating prices and creating chaos” – and I thought perhaps not. Haven’t we shown that the actual solution to a lack of PPE and respirators is government intervention and moving supply chains home so that ‘just in time’ becomes ‘just in case’? Apparently not in economic academia. “Of course it works in practice, but does it work in theory?” as the old economist joke goes. Sleep on, sweet neoclassical economics, sleep on, and dream your little utopian dreams.

Which can be said for a lot of the market. Bloomberg, for example, is on fine apolitical form today with a breezy take:

“With pollsters predicting that Donald Trump will soon be out of the picture, global investors can finally breathe a big sigh of relief. Foreign policy could become more predictable, so they can start buying Chinese government bonds, which actually pay interest. They can also invest in the mainland, where a successful Covid-19 containment strategy has allowed businesses to resume. Money managers won’t have to be on the edge all the time. That is certainly what traders are betting on.”

It’s certainly true that this is the meme the pollsters have gone all-in on. Well, not all the pollsters. Zogby and the Democracy Institute, neither of which are included in the benchmark Real Clear Politics polling average, say something very different. Moreover, where we stand today is almost exactly where we were in 2016 in some respects in the swing states. 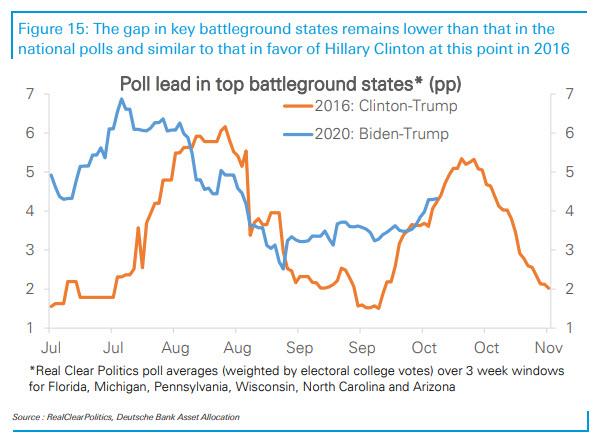 Excuse me for repeating this again, and please take it in the most neutral, non-partisan spirit: polls can be wrong. Especially when it is harder and harder to find people who have the time and energy to answer a survey, a process that naturally leans towards the wealthier and more politically active.

As Pew research notes in a looong election note today, different polling agencies conduct their surveys quite differently; the barriers to entry in the field have disappeared; a poll may label itself “nationally representative,” but that’s not a guarantee that its methodology is solid; the real margin of error is often double that which is reported (and they are already quite large at +/- 3%); huge sample sizes sound impressive, but don’t mean much as this can mean cheap and problematic sampling; evidence suggests if the public hears a certain candidate is likely to win, they are less likely to vote; public estimates of policies are generally trustworthy, but estimates of who will win are less so; all good polling relies on statistical adjustment; not adjusting for education is a disqualifying shortfall (as we saw in 2016); more transparency on how a poll was taken is better; polling is not broken, despite 2016; the evidence for “shy” Trump voters is actually quite shy; yet a systematic miss in election polls is more likely than people think, especially on the electoral college outcome.

Last night the Trump campaign claimed –besides “Fake This, Fake That, and The Other”–that current polls are “massively oversampling Democrats”. Who knows if this is true or not. Yet objectively there does seem a dichotomy between voter registration trends, which have been strongly Republican, and a large lead for Biden. Likewise (according to data crunchers) the same trends in Google search data, Facebook likes, Twitter follows, and even old-fashioned yard-signs. Something or nothing? Also, look out for the drip-drip of early voting data: caveat emptor (we are back to auctions again!), but in some places this is NOT fitting the picture of the polls.

Of course, **nobody** knows what the final US election outcome will be. And that is the key point. The market is priced as if it knows exactly that outcome. Real Clear Markets, in fact.

Also clear, and clearly ignored in all the embryonic geopolitical bonhomie, is that China reportedly just banned Aussie coal imports – or so claim Bloomberg. Add it to the list of other things Australian no longer welcome there. AUD has only dipped a little on what should be bad news: there must be a US election to think about instead.

Not so clear is any US fiscal stimulus. Still talking: still not delivering. Just three weeks until election day, folks.

And regrettably not clear is a Covid vaccine, Trump’s “immunity” and promises to kiss his rally crowd notwithstanding. Indeed, Johnson & Johnson has just said its Covid-19 vaccine study has been temporarily halted due to an unexplained illness in a trial participant; AstraZeneca has also temporarily stopped US tests of its vaccine after an illness.

Mateusz Machaj on the Structure of Production in Economic Theory, and the Political Philosophy of the Star Wars Prequels

Sound Money Is Key to Defending Our Liberties

Has Europe Really Turned The Corner?