By Jenn Goodman of Construction Dive,

In terms of sectors, backlog declined the most in the infrastructure category, yet was higher in the heavy industrial category, a segment that is coming back to due to a combination of an inventory rebuilding cycle, surging e-commerce demand and reshoring of production back to the United States, Basu said.

Regionally, the declines have been most pronounced in the West, which is largely a reflection of the many challenges facing California’s economy, Basu said. 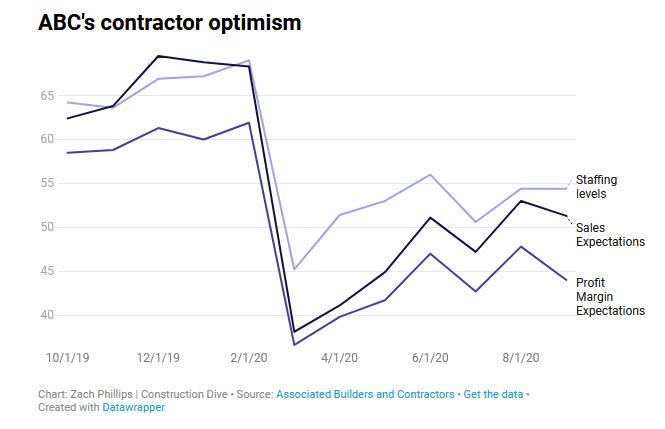 This negative sentiment is a reflection of the challenges facing contractors right now, he said. These include:

Despite ongoing economic uncertainty as the pandemic lingers and winter approaches, staffing levels are expected to grow over the next six months as contractors strive to hold onto their workforce and potentially add to their pool of talent, the economist said.

The ABC findings are in line with recent declines in billings for architectural professionals. The latest AIA Billings Index showed that architecture work is stalled at 40 indicating a decline in firm billings. The score has been unchanged for months, meaning that the share of firms reporting increasing billings has not risen during that time.

The AIA data indicates that business conditions are the most soft at firms in the Northeast, the region that was hardest hit by the pandemic and subsequent recession. Billings continued to decline at firms in the rest of the country as well, but the pace of that decline has slowed from the low point in the spring, according to AIA.

Netflix Is Hiking Prices 13% In Japan