Who’s Afraid Of A No-Deal Brexit?

Who’s Afraid Of A No-Deal Brexit?

To answer the question in the title… not Boris Johnson. If anything Johnson’s plan from the beginning has been to maneuver events to this state.

The latest news is that Boris just left his final offer on the table for the EU, walked away from talks but left the door open.

Johnson’s spokesman said shortly afterwards that talks were now over and there was no point in the EU’s chief negotiator Michel Barnier coming to London next week barring a change in approach.

“The trade talks are over: the EU have effectively ended them by saying that they do not want to change their negotiating position,” his spokesman said.

Johnson’s brinkmanship, which follows an EU demand that London make further concessions, may push Brexit towards disorder, though he still left open the possibility that the EU could reconsider and offer Britain a better deal.

“Unless there is a fundamental change of approach, we’re going to go for the Australia solution. And we should do it with great confidence,” he said.

BREAKING: UK Government source says Lord Frost has spoken to Barnier and told him not to bother coming to London on Monday for more talks.

In truth that is the lamest excuse for not agreeing to a deal I could think of. But, then again, since Johnson destroyed the EU’s biggest political wedge issue, the Northern Irish border with a simple restatement of U.K. Parliamentary sovereignty, what else does Macron have to stand on?

It turns out all he’s got is a really big soap box, but no leverage.

And that begs the question of why fishing “rights?”

This takes me back to the end of last year when I asked the more salient question, “Did Johnson and Macron Negotiate a Hard Brexit in October?“

Here are the reasons why they did.

The key to understanding what’s happening is the ever-shifting dynamic between France, Germany and the U.K. in relation to their relationship with the United States.

Macron is pushing France to unseat Germany as the de facto rule-setter for the EU. He wants more integration at every level, but most importantly fiscally.

Macron understands that the euro is flawed because of a lack of fiscal integration. For the euro to survive at least three major things need to happen.

1. There needs to be a single entity capable of issuing and retiring Euro-zone sovereign debt. The ECB and the EU fiscal authorities need to have a relationship similar to that of the Federal Reserve and the U.S. Treasury Dept.

2. The euro has to weaken considerably to remove the garrote around the necks of countries like Spain, Portugal, Italy, Greece and even France.

3. Much of the existing sovereign debt needs to be converted into a Eurobond, doing away with much of the stock of debt as liabilities for member states like Italy and Spain. The ECB can lead the way with its $3 trillion it’s holding on its balance sheet.

Given these dynamics are still in play today and we’re closer than ever to the Great Reset which will transform the European political and economic landscape, Macron holding firm on fishing “rights” smells, well, like old fish.

And all that had to occur all year was Johnson surviving the multiple attempts to either kill him or his government by Eurocrats who still oppose this scheme root and branch. At the same time, he couldn’t ever say he preferred a No-Deal, which is the preferable outcome for the whole of the U.K., otherwise there would have been a real political battle on his hands.

It’s like the reverse of what we had under Theresa May, who kept saying she wanted Brexit but was negotiating to keep it from happening. Johnson’s been saying he wants a deal with the EU when in reality he doesn’t.

Macron’s own agenda and France’s horrific fiscal and economic situation allows him the flexibility to go for the M.A.D. option. So, by this analysis, Macron isn’t afraid of a No-Deal Brexit either. So, who is?

Germany’s trade surplus with the U.K. was always the EU’s Achilles heel in Brexit negotiations. German industry, cut off from Russia’s markets by Merkel’s status quo antics to keep the U.S. somewhat placated, is now also going to be cut off from the U.K. once the tariffs go up and Trump wins re-election.

This is a complete disaster for Germany and Merkel knows it. She keeps trying to re-insert herself back into the negotiations, to at least salvage something for the CDU’s power base, but Macron keeps moving the goal posts.

I get the feeling now, with her draconian lockdowns that she’s preparing for the worst knowing that the civil unrest is rising over the destruction of the German economy she’s presided over.

Since she’s not running for re-election next year now has to do everything she can to deliver Germany to her Davos Crowd masters weak, divided, locked down and betrayed, as she’s been ordered to do.

It’s similar to what the Democrats are trying to pull off here in the U.S. and Labour has only partially succeeded in doing in the U.K.

Merkel has succeeded far more than Nancy Pelosi and the Democrats have.

The markets have begun sniffing this outcome for weeks. The firming U.S. dollar and failed bond rout from last week in U.S. Treasuries have been your signals that smart money is beginning to leave Europe. The U.S. 10-year tried to break above recent highs at 0.79% and failed miserably.

The threat of a No-Deal Brexit is becoming real.

So, guess who else is afraid of a No-Deal Brexit? The ECB.

The euro topped out a few weeks ago and after a breakdown and snap-back rally failed at $1.18 the euro is holding on for dear life.

The ECB has to hold up the euro to keep the European sovereign debt markets under wraps. 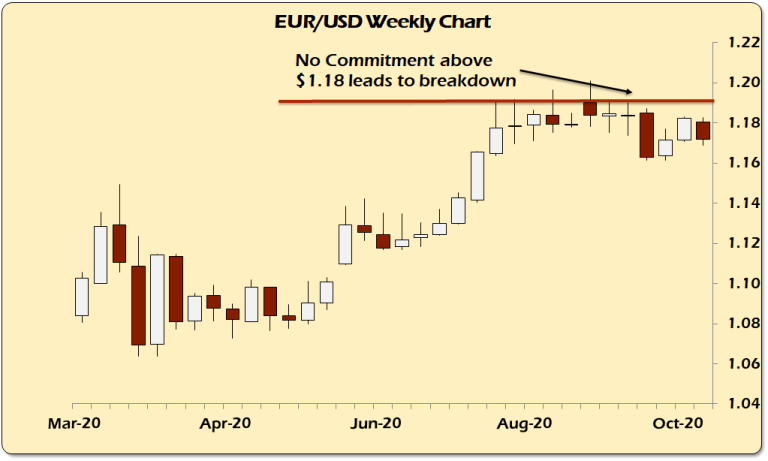 But that’s like holding back the tide here. Johnson holding the door open to further talks is just buying time for the ECB and should be seen as a fig leaf but it won’t be by the ignoramuses in charge of Brexit talks.

And that’s pushing money into U.S. stocks as the market rightly is upgrading daily Trump’s chances of re-election. Forget the headlines and the gaslighting polls.

The early Vote-By-Mail and early voting breakdowns in the battleground states all have Trump way ahead of where he was in 2016. And Biden has become a scandal and gaffe machine.

There’s clearly something happening within the bowels of the U.S. bureaucracy. Someone is rebelling against the planned destruction of the U.S. by Obama and the Democrats post-election.

The more these people push for the Great Reset the more patriots within the government are willing to risk put an end to this slow-burning coup.

Do you really think Hunter Biden just left a laptop full of incriminating evidence at a Delaware repair shop? Really? Or do you think it’s more plausible that’s a convenient cover story for a counter-coup from within the intelligence and/or law enforcement branches of the government?

The stakes are high for everyone. The election is becoming a singularity collapsing dozens of disparate narratives and agendas into one big event horizon and the outcome will change the world regardless of who wins.

Brexit’s integrity hangs in the balance as well and the only hope left for Brussels is a Trump loss which undermines Johnson’s negotiating position.

The cross-currents between the euro, the dollar, gold, bitcoin and U.S. stocks are all indicating to me that the shift towards the U.S. with a Trump victory is underway.

These are the very things I cover twice a week in my Market Reports for my Patrons every Wednesday and Sunday, because sometimes a few pictures are worth all the money in the world.

The following report from the last day of Q3 covered all of these issues and the broad inter-market analysis for the quarterly close. This is your heads-up for where we were headed in Q4 after the election(Chart analysis starts around 14:06).

Join my Patreon if you want access to this analysis before the headlines. Install the Brave Browser to support the shift away from Big Tech’s Censorship.

Don’t Be Fooled By The Oil Price Rebound

The Biggest Fraud Ever, Part 2: The Vaccine Swindle