Trump Vs Biden On The Economy, The Fed, & The Markets

Trump Vs Biden On The Economy, The Fed, & The Markets

Authored by Michael Lebowitz and Jack Scott via RealInvestmentAdvice.com,

On November 3, 2020, the White House, one-third of the Senate, and the entire House of Representatives are on the ballot. In case it is not obvious, this election will be significant.

In the current politically charged environment, either Presidential candidate will be powerless to enact significant change if the opposing party holds a majority in the Senate and House. Conversely, a sweep whereby the President and both houses are from the same party can produce substantial change.

This article’s focus is on Donald Trump’s and Joe Biden’s policies; however, we stress the outcome of the legislative elections may nullify or exaggerate our forthcoming thoughts.

The age of passive investing is upon us. Passive investors do not assess earnings or economic factors. They buy and sell based on cash on hand or cash needs. They are price insensitive. It is a brain-dead strategy.

It is tempting to conclude that the election will not matter in this environment. That might be true, but this current bit of investor irrationality will end. When it does, we would be well-served to understand the economic underpinnings of corporations. Therefore, it is incumbent upon us to review the candidates and consider how they might affect the economy, Fed, and, ultimately, the financial markets.

The following sections provide our unbiased opinions on how Donald Trump and Joe Biden are likely to approach critical economic matters if elected.

The most significant change in international trade over the last 40+ years is the “America First” stance Donald Trump hoisted onto global trade. His policy was most evident in China relations.

Trump is the first President to attack China’s trade policies since they became an exporting powerhouse. Not only did he put $350bn in tariffs on China, but pledges more negotiations if wins. The effectiveness of actions is questionable, but they are a step in the right direction to reduce our trade deficit and become less dependent on a totalitarian adversary.

Biden seems to agree with Trump’s stance on China and may leave the tariffs in place. We are less sure as to whether he will take the baton and stay aggressive.

The more significant difference between them lies in how they manage relationships with our second and third biggest trade partners, Canada and Mexico, as well as Europe and Japan. Trump has upped rhetoric towards these countries and introduced tariffs in some cases. We suspect similar actions will continue under a second term as he aims to level the trade playing field.

Biden will likely be friendlier to our allies and much less likely to buck current trade norms. Any trade agreement/pact in place is much more likely to remain intact under Biden than Trump.

The dollar may fare worse under Trump as his actions will incentivize foreign nations to use their currencies for trade.

Trump reduced taxes in 2018 and is now allowing the deferral of payroll taxes for lower and middle-class wage earners. Both changes are temporary but Trump promises to make them permanent if he wins a second term. He is also likely to push for further tax cuts for individuals and corporations. The tweet below speaks volumes.

Biden’s team has made a variety of tax proposals, but we can outline the “Big 5” –

Needless to say, Biden appears likely to increase taxes on the wealthy. It is unclear how Biden will treat lower and middle-income taxpayers.

JP Morgan believes stockholders may see an increase in their tax burden under a Biden presidency. Per JP Morgan “Biden’s proposal is for the maximum tax rate for long-term capital gains to rise to 39.6% from 23.8% currently, a 66% proportional rise.”

All of the “Big 5” are controversial and politically charged, so a Biden-Harris administration would probably need more than a 51 or 52 Senate advantage to enact some or all the changes.

Trump is perceived to be business-friendly as he rolled back a large number of regulations. Some of the key regulations include those in agriculture, education, environmental, finance, health, housing, labor, and transportation.

In Trump’s words- “For every one new regulation added, nearly eight regulations have been terminated.”  We expect more deregulation under a second term. From a shareholder perspective, this will be favorable for corporate earnings.

Biden is likely to walk back some of Trump’s regulatory actions, especially those affecting labor, environment, and housing. The energy sector probably has the most at risk.

Trump has opened up drillable land and waters and promoted pipelines. He is even trying to keep the coal industry alive. His agenda is very much pro domestic carbon energy.

As was the case under Obama, the Biden-Harris administration will be greener. They will probably create headwinds for the carbon-based energy industry while favoring renewable energy. The “Green New Deal” liberal wing of the Democratic Party has a strong voice and power to persuade legislation.

Biden and Harris are accused of wanting to shut down fracking. Although they have been documented as having said it, they both deny it. Natural Gas, on the other hand, maybe more at risk. Per Bloomberg: “Biden’s plan could speed up natural gas becoming “economically and environmentally untenable within the power sector.”

Under Biden, renewable energy producers are likely to benefit. This helps explains why TAN (Invesco’s solar ETF) has been surging as Biden’s polling lead expands.

Biden will likely try to re-engage in the Paris Climate Agreement and possibly enter the U.S. into other global environmental pacts. Again, those companies in alternative energy space should benefit at the expense of carbon-based companies.

One thing we can count on from both candidates is massive fiscal deficits. In the first debate, both candidates made it clear that spending, albeit on different items, is a top priority. They both recognize that economic growth is heavily reliant on federal spending. As we know, electability heavily rests on economic activity.

One crucial difference between the two is that Biden will likely spend more than Trump but will raise taxes. Trump may spend less but cut taxes. At the end of the day, both are likely to administer trillion-dollar-plus annual deficits

Before COVID, Trump averaged deficits of almost $800 billion per year. In the current fiscal year ending this month, he will administer a record $3.1 Trillion deficit. That deficit is massive, even by 2009/10 recession standards.

While government spending accelerated under Trump due to COVID, we should expect similar trends if Biden is the President. He says he will introduce over five trillion dollars in additional spending to what is already in forecasts.

Trump is more likely to focus on defense spending, while Biden on infrastructure and social causes.

Both will perpetuate the deficit problems. Companies that are closer to the Treasury’s money spigot are likely to benefit the most. As discussed earlier, policy implementation is dependent on the composition of the House and Senate and the ability of Congress and the President to work together.

“Under our central estimate, neither major candidate for President of the United States in 2020 has put forward a plan that would address our unsustainable fiscal path. Instead, both President Donald Trump and former Vice President Joe Biden have promoted policy agendas that would likely significantly add to annual deficits and increase debt-to-GDP over the next decade.” – The Cost of the Trump and Biden Campaign Plans – Committee for a Responsible Federal Budget (CRFB) 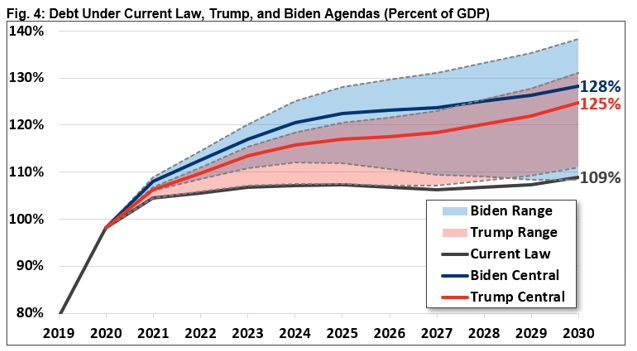 Chairman Jerome Powell’s current term ends in February 2022. We suspect that both candidates are likely to keep him at the helm. While Trump had public qualms with Powell, Powell seemed to redeem himself with the COVID era policy. Powell’s Fed has, and continues to provide monetary stimulus to a level this country has never seen before. Markets are up in large part due to the Fed flooding the system with liquidity. Despite his criticism of Jerome Powell, President Trump has been a beneficiary of Federal Reserve policies.

While Powell is a Republican, we think Biden could likely keep him aboard as well for similar reasons.

When assessing COVID from an economic standpoint, it may not matter who the President is. As we have learned, much of the power to restrict economic activity lies at the state, county, and city levels. Further, most individuals, regardless of restrictions, take matters into their own hands.

Biden is much more likely to encourage restrictions than Trump. Indeed, both candidates will aggressively push for a vaccine and treatments.

Coincidently, until a few weeks ago, Trump was considered good for the Market and Biden bad. Biden has extended his lead in polling, and not surprisingly, the narrative changed. Biden’s massive spending plans can only be good for stock prices, they say.

As we noted earlier, a President’s power is dependent on the composition of the House and Senate. If the future President is working with the opposite party in Congress, less is likely to occur. As such, many of the differences noted above may not matter. Conversely, if one party sweeps the legislative and executive branches, the differences will be significant.

One final consideration. We know what we are getting with Trump. Despite nearly 50 years in government, Biden is a wild card. He has shown a willingness to change prior long-held views to accommodate the quickly evolving liberal wing of his party. How will that play out if Biden wins the election? Will he take on the platform of his party’s very liberal side, or will he maintain the more moderate views he has held consistently over his lifetime?