Apparently, there’s many in the U.S. who believe that the civil unrest and the volatility isn’t just simply going to go away on its own after the election. This is probably why online purchases for items military gear, including items like the $220 CM-6M gas mask which is resistant to bean bag rounds, are flying off the online shelves.

There has been a more than 20x increase in the sales of such goods and military gear this year, according to Bloomberg.

Roman Zrazhevskiy of Mira Safety in Austin, Texas said: “It doesn’t matter who gets elected. They think that no matter who wins, Biden or Trump, there are going to be people who are upset about the result.”

Retail chain 5.11 Tactical is doing almost $400 million in annual sales in places like Tulsa and El Paso. In some places the military style outfits are becoming everyday wear. Same store sales were up 10.5% in Q2 and 7.5% in Q1.

Guns and ammo sales have also surged. We noted Smith & Wesson had reported record sales back in September, for example.

The 500,000-member U.S. Concealed Carry Association says it has seen its membership “explode”. They are signing up members four times faster than a year ago. 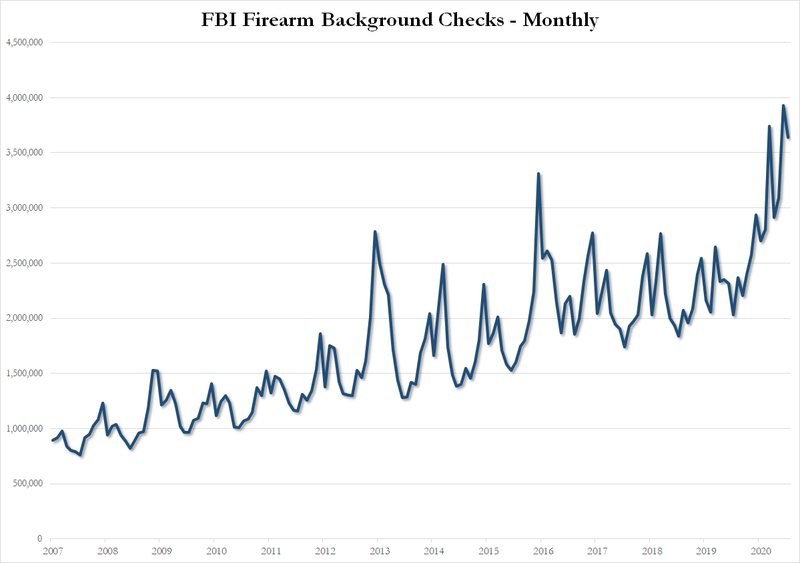 Elizabeth Neumann, a former assistant secretary for threat prevention at the Department of Homeland Security, commented: “It’s evidence of what many people have been expressing concern about for the last six months — the stress associated with the pandemic, a frustration or anger about various government mitigation efforts and a belief that those efforts are infringing on their individual liberties.”

At another tactical gear shop, Gladiator Solutions, half the orders are coming from civilians – a major uptick from when law enforcement would be the company’s number one customer.

Matt Materazo, the company’s founder, said: “We’ve seen a big uptick coming out of New York, New Jersey, Illinois — not just those states but Chicago, Manhattan, Queens and San Francisco. We never did business with folks from San Francisco.”

Looking For A Sellable Rally

The Bond Market Is Not Impressed With The Fed