With just one week to go until the Nov 3 election, Goldman’s Alessio Rizzi finds that options markets are still pricing uncertainty beyond Election Day, “partly due to the risk of a contested election.”

As has been discussed ad nauseam before, the Goldman strategist writes that a clear result with less uncertainty on fiscal policy could be supportive for risky assets, and that “a decline in volatility and related uncertainty can boost investor sentiment which has historically been weak ahead of the election and has improved afterwards.” To wit, he notes that in the months post elections, S&P 500 3m implied volatility has usually decreased (although it is safe to say that extrapolating the future from any previous election would be borderling idiotic). 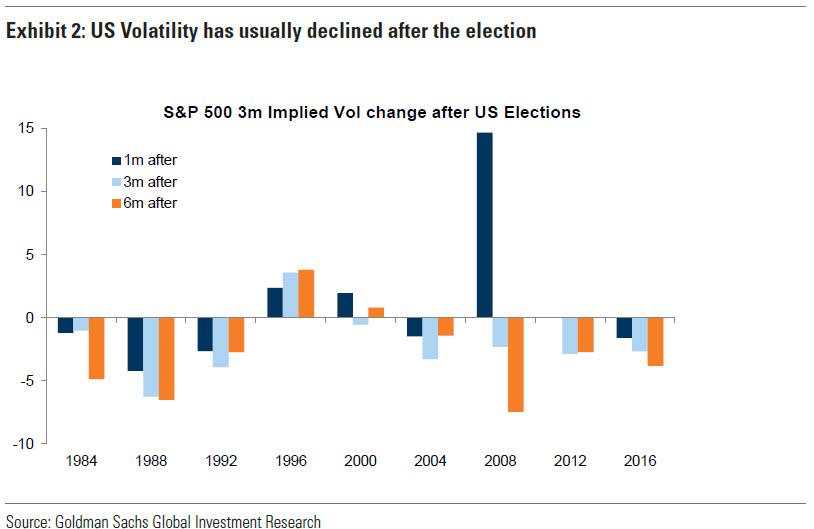 None of this is new. What is, however, is that one day after JPMorgan flipped the latest Wall Street narrative – the one where a Joe Biden victory and a Blue Sweep would be the best outcome for stocks – on its head, instead now suggesting that a Trump victory is the “Most Favorable Outcome”, and would push the S&P to 3,900, Goldman appears to join this latest bandwagon, warning that a Blue Sweep is no longer guaranteed, something we first observed late on Sunday when we wrote “Odds Of A “Blue Wave” Tumble, Hammering Risk“

This is how Rizzi spins the latest data: “since the end of September, according to prediction markets and Superforcasters, the likelihood of a ‘blue wave’ has increased and with it the prospect of larger fiscal spending which could drive a rotation into more reflationary assets.” 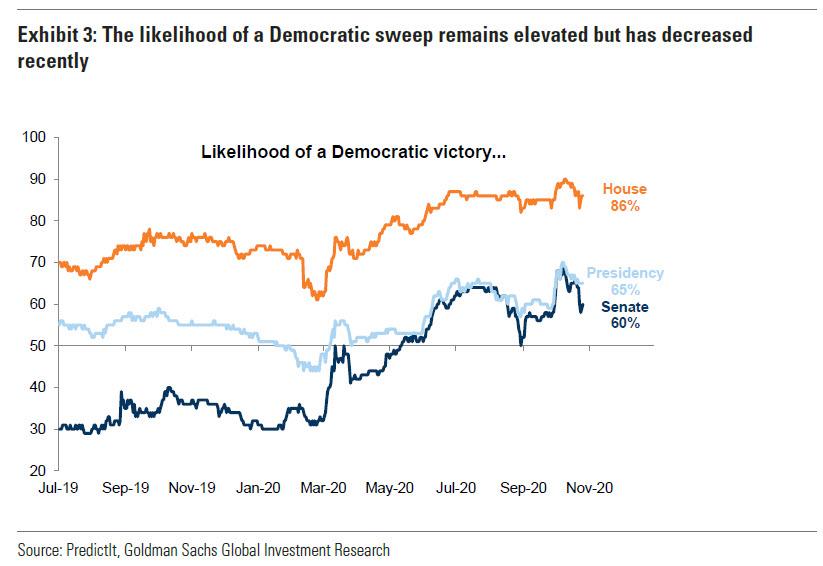 Of course, until this weekend, this was the prevailing narrative on Wall Street, and markets had priced in much of this outcome. As Rizzi notes, long-term US rates are close to June’s highs driven by the combined increase of real rates and breakevens, something we observed last week when we showed that the record-long, 7-month decoupling stretch between BEs and real rates had finally come to an end. 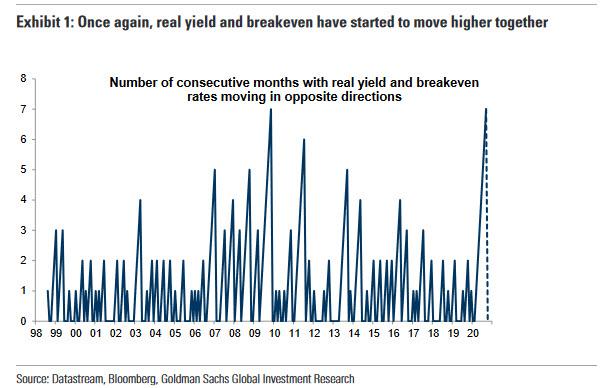 Other risk-on pair trades such as cyclicals vs defensives, copper vs gold, equity vs bonds had also outperformed, betting on a Democratic Sweep. In such a “blue wave” scenario, Goldman’s rates team saw the potential for US rates to increase further with pro-inflation rotation within equity likely to continue. The bank also said that “EM equity also has further upside as it could benefit from lower risks related to trade tensions, dollar downside and a more risk-friendly environment.” Finally, call options on MSCI EM could perform well considering the 2w skew is now one of the most expensive across assets. 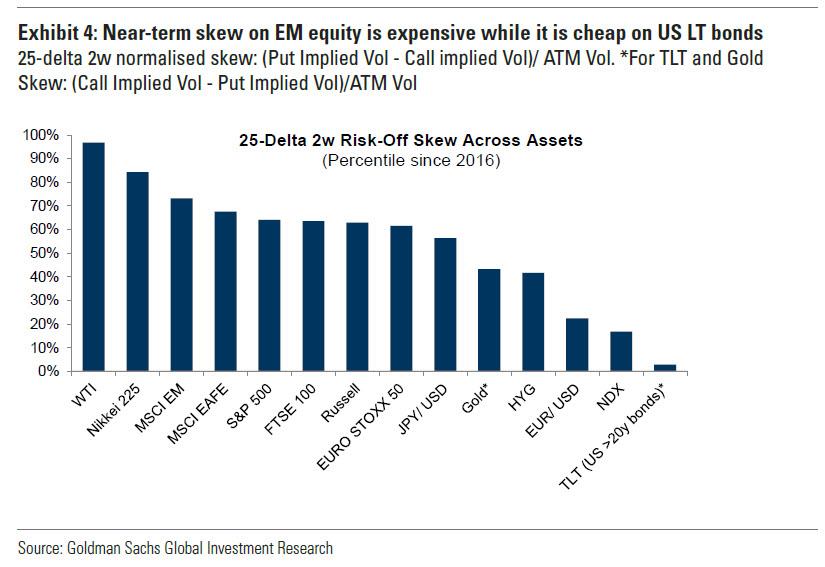 All of this collapsed – if briefly – on Sunday after we first observed that the odds of a Blue Sweep was tumbling.

Fast forward to today when the Goldman strategist writes that while the likelihood of a Democratic Senate majority has risen since September, “more recently it fell from 69% on Oct 8 to 60% based on prediction markets.” And although a Biden victory with a divided congress might also be market friendly, Goldman “thinks it could introduce renewed risks to the current reflationary rotation.”

If a “blue wave” is not coming, Goldman recommends trading such a “shock” outcome by betting on lower rates with leverage, to wit:

a Call vs put 2w skew on US long-term bond is close to an historical low and risk reversals could be an attractive hedge for lower rates. While the rotation could have a cap, headline equity should still perform well given the lower risk of tax hikes.

That said, the lack of a blue wave would not have a major impact on stocks, with Goldman writing that the bank’s strategists see “the S&P 500 at 3700 in the near term in a Biden victory with a divided congress.”

Has Trump Turned An Important Corner?