The Growing Fear Of Speaking Out

The Growing Fear Of Speaking Out

There is a growing trend where people are feeling compelled to deny their opinions and remain silent. This is because we are seeing a blatant disregard for the opinions of others by both those on the left and the right. Democracy as a form of government is far from perfect. Its greatest weakness is rooted in the ability of a vocal minority to force their opinions on others.

Governments Are Adding To The Fear

This growing fear of speaking out is not limited to America, we are seeing it in countries that claim to be free across the world. The tech giants, governments, and extremist groups are all throwing fuel on the fire and adding to the feeling retaliation is a fair response to speaking our mind. The tech giants’ effort to closely watch, silence, and censor those not marching in line with their desired narrative is a dagger in the heart of free speech. This effort is also apparent when we hear about groups threatening to block highways, shut down ports, and occupy state capitols if things fail to go their way. It even extends to harassing elected officials, we are hearing more threats from groups vowing to hound and badger members of Congress at their own homes. Another sign of intolerance is seen in the mass arrest of nonviolent protesters by governments. 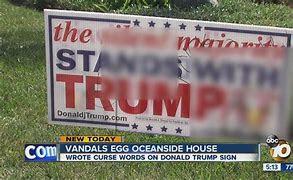 Consider what we are witnessing as a sign of the times. Above is a picture showing a sign that vandals wrote curse words on, they also egged the house where it was displayed. This started several years ago and ramped up when the term “politically correct” moved front and center. In the minds of some individuals if you say anything that they consider “incorrect” it justifies a harsh response.

In such an environment it is little wonder that many people have become less vocal and afraid to speak their mind. This could help explain why so many people doubt the recent political polls showing Joe Biden leading President Trump by a large margin. Ironically, it is the Democrats that continue to demand the President disavow violence and those associated with it. The cornerstones of democracy are  freedom of assembly and speech, inclusiveness and equality, membership, consent, voting, right to life, and minority rights. When these are trampled upon for any reason, the system is in danger of being cast aside.

In one of the most disgusting acts occurring in an election year, some Joe Biden supporters shoved and stole the hat of a young boy. The reason they assaulted Riley was that he was wearing a MAGA hat. His mother, Abbey Wigton, 27. Said “We were standing outside peacefully minding our own business,” she continued.

“Suddenly, two Joe Biden supporters began to yell political epithets at my child. They ripped the sign from my arms and assaulted my seven-year-old son.

“The Joe Biden supporters laid hands on my child and ripped his “Make America Great Again” hat from his head while cursing at him and pushing him over.”

She went on to say, “The two Joe Biden supporters verbally and physically assaulted my child. My 7-year-old child was sobbing and screaming.” Riley, was distraught following the incident because learning how absolutely hideous people can be at an early age can be difficult to handle. The boy wanted to call the police. He wanted his hat back. He wanted the evil people who attacked him to apologize. While the police can do little and the chance of getting an apology very slim, at least one of his wishes is coming true as he has a replacement hat on the way. He found this out when the  White House called to tell him.

But this article is not about a small boy being assaulted, it is about how most people are now thinking twice before saying what they think. This article is about the ability of a vocal minority to make people so uncomfortable they become silent. It is about how we should be appalled by those that justify violence, aggression, and force towards those that simply disagree with them. It is about how the threat you may be demonized if you say what you feel tends to breed silence. Watching this unfold is leaving a sickening feeling in those valuing free speech.

A recent survey of 2,000 Americans by Cato Institute/YouGov found most Americans say “the political climate these days prevents them from saying things they believe because others might find them offensive”. The survey indicated 52% of Democrats, 59% of independents, and 77% of Republicans now say they have political opinions they are afraid to share. Most people do not enjoy confrontations or being harassed and as a result, are self-censoring themselves. With the free exchange of opinions and ideas being the foundation of a free and healthy democracy the sign public discourse is being destroyed does not bode well for our continued freedom.

Read here for more on the Riley Wigton story…