Black-owned businesses, which were hit hardest during the peak COVID-19 lockdowns, have rebounded to their pre-pandemic numbers according to research based on data from the US Census Bureau.

In April, the number of black-owned businesses cratered by 41% – only to decline to 19% by June, and finally increase to approximately 1.1 million nationwide – a 2% increase from February’s pre-pandemic figure, according to Bloomberg. 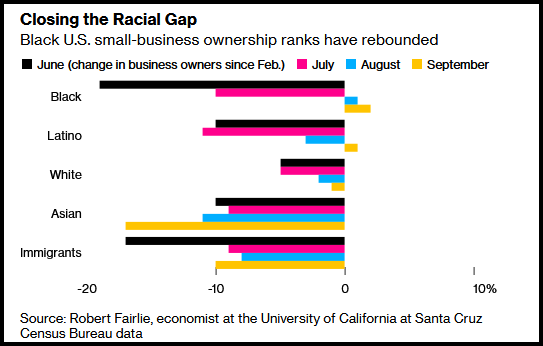 Of course, no feel-good statistics which might help Trump would be replete without a sprinkle of doubt, such as UC Santa Cruz economics professor Robert Fairlie, who collected the data – and “cautioned that the Census numbers fluctuate from month to month, so it’s possible Black owners didn’t see an absolute increase over the pre-pandemic period.” He adds that ‘the data don’t address whether the owners are actually making money or not.’

Beyond the caveats on the lumpy data, the reasons behind the surprising recovery are uncertain. The movement to support Black-owned businesses that sprung up during nationwide protests over police brutality may have been a contributing factor, according to Fairlie. Many African-American entrepreneurs noted a surge in business over the summer. –Bloomberg

“The rebound might be due to a concerted effort by customers to buy from Black-owned businesses,” said Fairlie, adding “I’m not sure if this explains everything, but it certainly helped.”

Bloomberg, still scratching their heads, notes that it’s unclear if the boost comes from businesses reopening or new firms being created at a faster pace than those which have closed permanently. One possible explanation is a recent spike in entrepreneurship in the US – with new business formation filings climbing 77% in the third quarter vs. the preceding quarter – an 82% jump from a year earlier.

Latino businesses also saw a September boost, up 1% from February pre-pandemic levels following a drop of as much as 32% in April, according to Fairlie.

The number of white business owners, meanwhile, were down 1% in September, while Asians and immigrants have also seen sharp declines of 13% and 17% respectively vs. February.

2020 Hurricane Season Begins – Next Tropical Depression Could Form In Days