“Epic” Quant Carnage As Momentum Plunges Most On Record Amid “Insane, Tectonic” Rotation

“Epic” Quant Carnage As Momentum Plunges Most On Record Amid “Insane, Tectonic” Rotation

What was already a dismal year for quant funds is about to get absolutely catastrophic.

After a historic headfake, which saw the Nasdaq soar higher overnight on hopes that the Fed may have to step in with more monetary easing to offset the economic slowdown that would result from rising covid cases, this morning’s Pfizer news appears to have effectively tabled the covid threat with markets exploding to new all time highs, and unleashing an organic reflation trade in lieu of a “Blue Wave”, one which has sent the 10Y yield surging to 0.96%, the highest level since June… 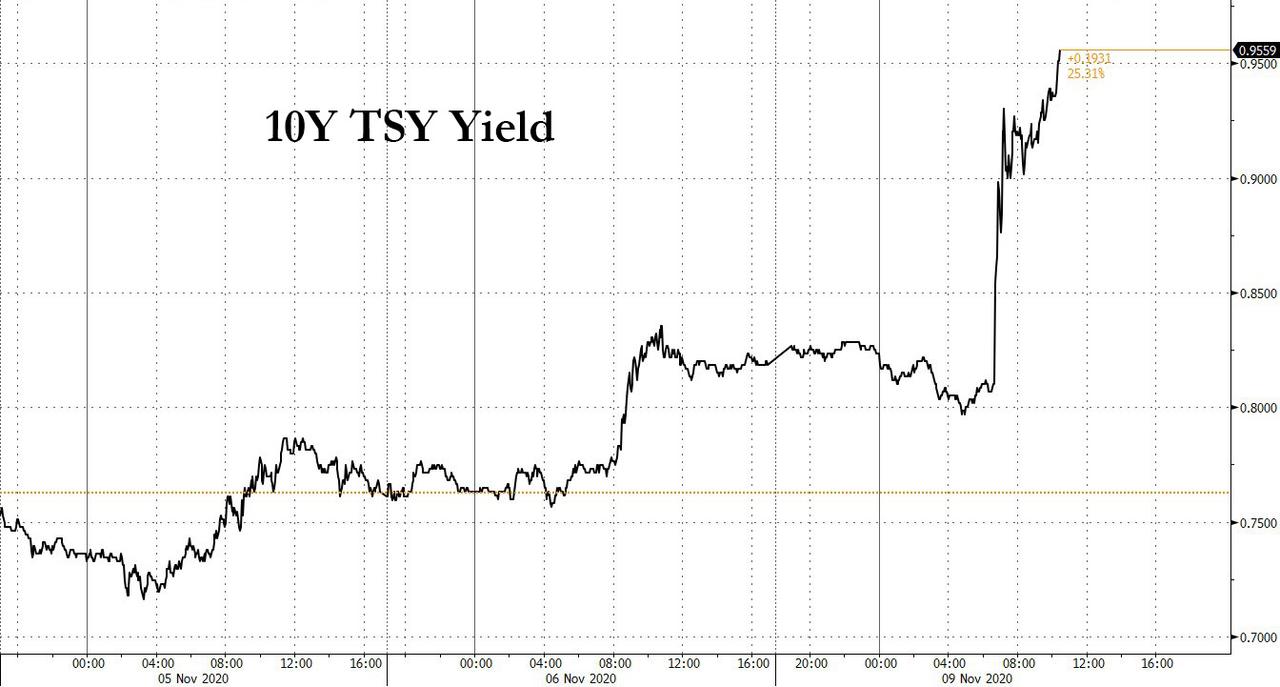 … which while benefiting small caps and tech stocks, has crippled duration/growth names, i.e., the tech/FAAMG/Nasdaq complex. 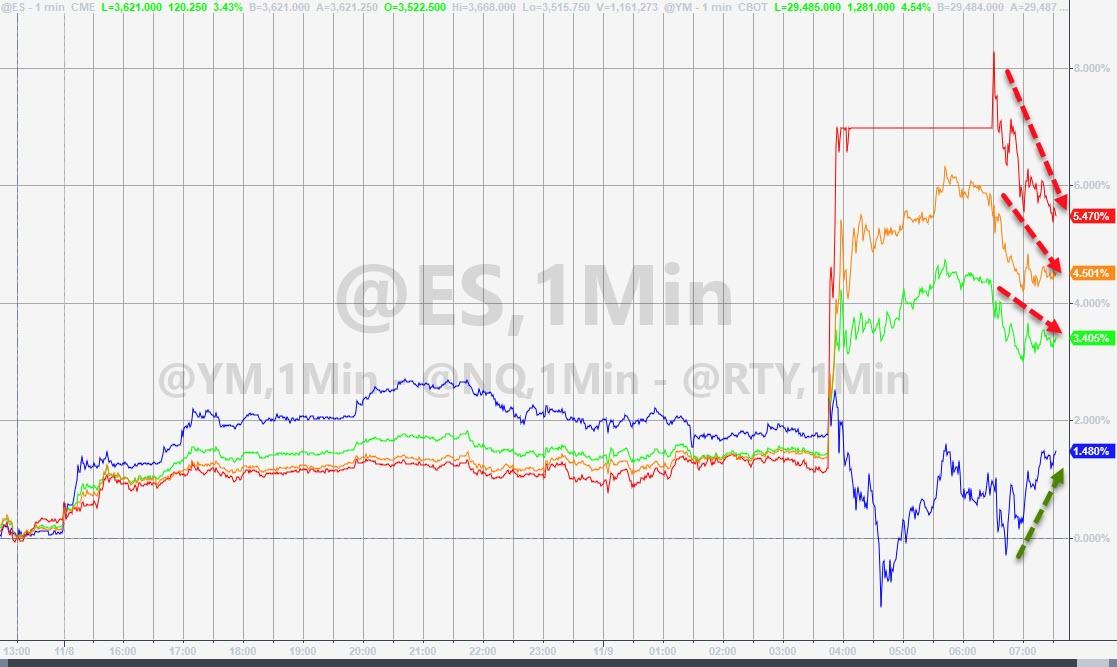 And as investors scramble to cover small-cap short and flee the tech names which had massively outperformed this year, and which form the core of the momentum trade, the market-neutral Momentum factor is getting absolutely destroyed, plunging by the most on record.

Commenting on today’s action, Nomura x-asset strategist Charlie McElligott writes that following the “de-risking into the election event” which as he explained last week was mostly about the initial VaR-down transitioning to a massive “gross-up” redeployment in underlying status quo “momentum” Equities books on post-election clarity, “the the issue now isn’t directional as far as risk deployment goes…instead, for the masses, the challenge is going to be about dispersion, because the 5+ year legacy crowded-positioning of the “everything duration” goldilocks momentum trade—long secular growth vs short cyclical value—is likely going to see tectonic movement and at the very least, tactical unwind to play for this “economic reopening” forward view.”

As Bloomberg notes, even before today’s quant carnage, Sanford Bernstein quant analysts warned over the momentum factor’s soaring valuations, which they calculated at more than two sigme above its historic average in the U.S. and Europe; in the US, a measure of crowding in the factor has surged anew to multi-year highs. 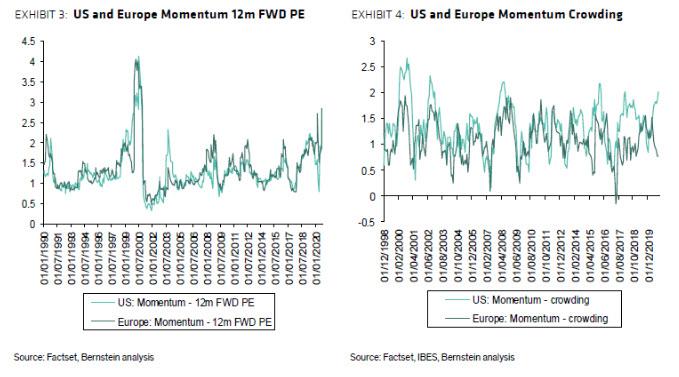 Today’s historic move also represents Wall Street’s latest fiasco in a year in which it repeatedly failed to capture the market’s upside, because as we noted yesterday heading into this week and with some clarity on the election front, attention had turned to the coming covid developments as Morgan Stanley wrote last night in “With Little Or No Stimulus Coming, Pandemic Developments Become Critical For Markets.”

To be sure, the market is as usual getting ahead of itself, because even if those 40% of Americans who refuse to get immunized somehow volunteer for the vaccine, there is a very long way to go before any one of the candidates receives regulatory approval and is distributed widely enough for restaurants, offices, planes and shops to see a recovery in demand. Cited by Bloomberg, Evercore ISI estimates normal life won’t return until the third quarter of next year.

None of that matters to stocks, however, which are soaring on the twin tailwinds of a possible burst in monetary stimulus/more QE as Congress gridlock means a smaller fiscal injection, coupled with the pricing in of the reflation to be unleashed by the elimination of covid some time in 2021, and for the clearest indication look no further than the VaR-shocking move higher in Treasury yields.

Going back to McElligott, he concludes that with the i) full-throttle “economic reopening” joy following the PFE Vaccine headlines and ii) the still-present risk of a “Blue Wave” dynamic still a low-delta “thing” due to Georgia run-off potentials, the “Rotation Reflation Reopening Relief trade will be insane today – but for FAR, FAR BETTER REASONS than just the unlimited govt spending expansion thesis alone” — which is why the Russell 2000 has exploded higher even as the Nasdaq remains flattish, in a pure unwind of “Secular over Cyclical” status quo trades.

To the Nomura strategist, this means that today is going to be an epic “Value over Growth and Momentum” trade of right-tail outlier proportions, which will sting multi-year consensus “everything duration” secular-over-cyclical positioning  with Size (Small over Large), Beta, Vol, Leveraged Balance Sheet, PMI Sensititives and Yield Sensitives all set to explode higher in sympathy, and which are only tactically owned but recently paired-back after the election outcomes.

Translation: the paradox of today’s explosion higher across markets is that it may result in one or more quant (and not only) funds capitulating and liquidating.

TOTAL WAR is coming to America after Biden is DEFEATED on Nov. 3rd; prepare for every worst case scenario you’ve ever imagined