Lately, Republican social media users, who have been censored or de-platformed, have embarked on a great migration to a new platform, that is, Parler, bills itself as a Twitter rival with “an unbiased social media focused on real user experiences and engagement.”

According to radio host Dan Bongino, who has an “ownership stake” in Parler  – the platform has “exploded” with new users:

“We’re adding thousands of users per minute, and we’re working out the glitches as a result.”

The influx of new users, likely ex-Twitter/Facebook Republican folks, who have had their content censored or have been banned from the platform or are just fed up with liberals censoring their every tweet/post, have made Parler the “most downloaded application in the US on Google Play, overtaking such platforms as TikTok, Instagram, and Twitter,” said RT News.

“Prior to June, Parler was averaging about 2,000 downloads. Its user base doubled that month, to about 1.5 million, after Twitter’s banning of conservative meme creator Carpe Donktum sparked an anti-censorship backlash. Parler is now reportedly adding as many users per minute as it used to gain in a day,” RT said.

Bongino tweeted that “liberal lunatics” running social media platforms such as Facebook and Twitter “have awakened a sleeping giant. We gave a collective middle finger to the tech tyrants just now as Parler became the NUMBER ONE most downloaded app in the world.” 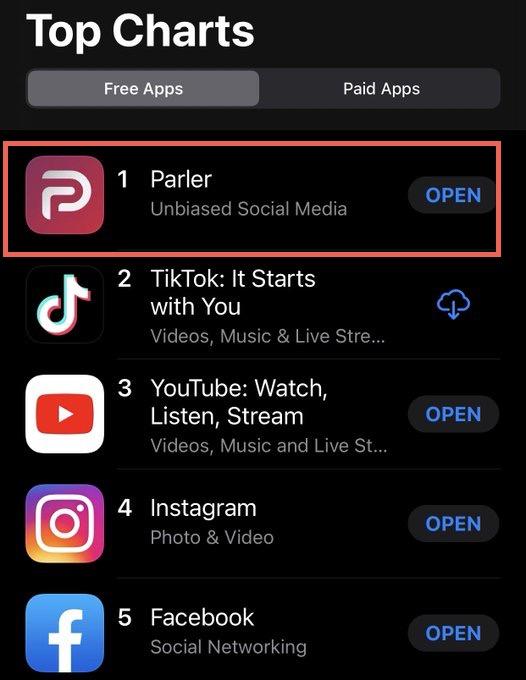 Internet searches for “Parler” have exploded in the last few days.

Many of the folks searching for “Parler” are based in conservative states, including Alabama, Mississippi, Louisana, West Virginia, and Oklahoma.

The exodus of Republicans from Twitter and Facebook to Parler appears to have begun shortly after NYPost’s Hunter Biden story was censored by social media giants in mid-October.

Brickbat: You Have to Move

BREAKING: Thousands of guillotines pre-positioned across America for left-wing terrorists to execute conservatives, Christians and Whites in the unfolding CIVIL WAR