We’re not sure what it’s going to take for Chicago mayor Lori Lightfoot to realize that backing her city’s police department and enforcing the law, not avoiding it, is what’s going to make a difference in cleaning up her city.

Perhaps the following stat will be shocking enough for her to get a grip on exactly what is going on, though we don’t have any confidence that it will: 17 people were shot in Chicago on Monday alone this week. Four of those shootings resulted in fatalities.

The situation in Chicago echoes that of many other liberal run cities, where crime has run rampant since this summer’s “peaceful protests”, which consisted of property damage, assaults, looting and lighting cities on fire. As a response, clueless liberal politicians have allowed a “defund the police” narrative to take shape with many supporting the idea.

On Monday, the first fatality was found “in the 4700 block of West 59th Street” at 2AM when officers discovered a man who had crashed his vehicle also had a gunshot wound to his face.

Two other men were “each shot in the head while standing on a corner in the 3600 block of West Division Street” at 5:50PM on Monday. A fourth fatality occurred when a 20 year old man was “shot and fatally wounded” at about 7PM while sitting the back of a vehicle “in the 6700 block of North Newgard Avenue.”

40 other people were also shot over the weekend, with five of those resulting in fatalities, according to Breitbart. The crime spree has resulted in an exodus from the city.

One 30 year old nurse that lives in River North told the Chicago Tribune last month: “Not to make it all about us; the whole world is suffering. This is a minute factor in all of that, and we totally realize that. We are very lucky to have what we do have. But I do think that I’ve never had to think about my own safety in this way before.” 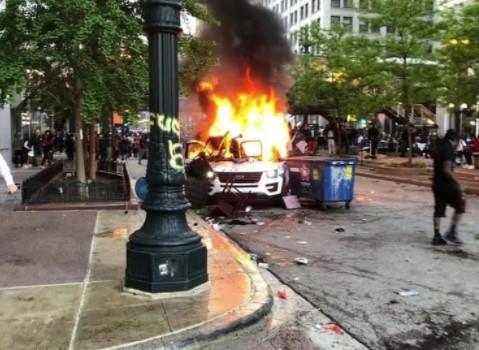 Resident Neil Spun, who has lived in Chicago for more than 30 years, said: “There have been riots before, and looting. It just seems to me now that the city isn’t doing anything about it. I don’t see this getting any better, and so I’d like to leave.”

And it’s not just in “quality of living” that Chicago is shining under Mayor Lightfoot – it’s also financially. Recall, we noted in late October that Chicago was on the verge of a credit downgrade, according to its Chief Financial Officer Jennie Huang Bennett.

Lightfoot proposed the novel idea of implementing a property tax increase of $94 million and a refinance of the city’s $1.7 billion in outstanding bonds to try and alleviate some of the financial distress. Because we’re sure citizens of Chicago are in a major rush to fork over more money to a city government that has enabled protests and riots that turned the city into chaos over the summer.