One day after CBS News announced that Joe Biden is planning a ‘sweeping reversal’ of President Trump’s immigration agenda, the Twitter account for Immigration and Customs Enforcement (ICE) appears to have been nuked by someone from within the agency. A screenshot doesn’t suggest the account was suspended by Twitter (a cached version of the account can be seen here), but was instead deleted.

While some have suggested a hack or a rogue employee, it seems odd that other accounts associated with the agency, such as ICE Español, are still up and running as of this writing. 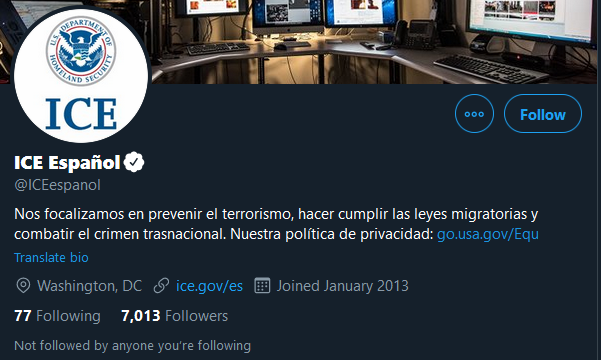 Whatever the case, it’s odd timing following the CBS News report regarding Biden’s intended immigration U-turn, should he win the 2020 election.

As Summit News summarizes, among Biden’s actions if he reaches the Oval Offices will be the following;

– Imposing a 100 day freeze on deportations.

– Directing US Immigration and Customs Enforcement to refrain from making “collateral arrests,” meaning illegal immigrants who haven’t been convicted of a crime will be protected.

– Scrapping Trump’s policy of requiring non-Mexican migrants at the southern border to wait out the duration of their US asylum case in Mexico.

– Withdrawing from the three bilateral agreements with Guatemala, El Salvador and Honduras that sent rejected asylum seekers to those countries.

– Granting requests for “refugees” deemed “at-risk categories of children” and allowing them to reunite with the families in the US.

– Reversing the Trump administration’s policy of restricting migration due to the COVID-19 pandemic.

– Introducing amnesty legislation allowing around 11 million illegal aliens already in the US to legalize their status.

“All that stuff was done administratively through the [President’s] executive authority, and so a new executive can basically reject those and start from scratch,” a source familiar with Biden’s plans told the network.

Watch: Obama Blames Trump For His Own Border “Cages”

Yates Throws “Rogue” Comey Under The Bus Over Flynn Investigation

The Secret War in Africa