Beijing is moving away from its implicit support for state-owned enterprises in the bond market.

Over the past two months, three of the five onshore bond defaults came from SOEs, according to Goldman Sachs. That brought the total number of SOE defaults this year to six, making 2020 one of the most-active years for defaults in the sector. The 93 billion yuan ($14 billion) in domestic bonds outstanding at the time of default represented 0.46% of all SOE bonds at the start of the year, compared with 0.04% in 2019. 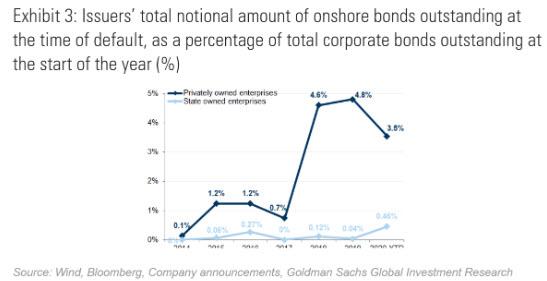 Beyond the SOEs, policy makers also seem to be attempting to shake off the moral hazard of “too big to fail.” While the number of total defaults has declined, the size of the non-payments has increased considerably. The 19 domestic bond defaults this year affect 163 billion yuan outstanding, surpassing the 131 billion yuan from 36 non-payments in 2019.

Make no mistake — systemically important companies are likely to be rescued when push comes to shove. Still, the message is loud and clear: Now that the economy has recovered, China has moved to credit clean-up mode from forbearance mode.

“This will likely mean defaults will pick up” next year, and there will continue to be a “fat tail” among China’s high-yield bonds, Goldman Sachs analysts Kenneth Ho and Chakki Ting wrote. 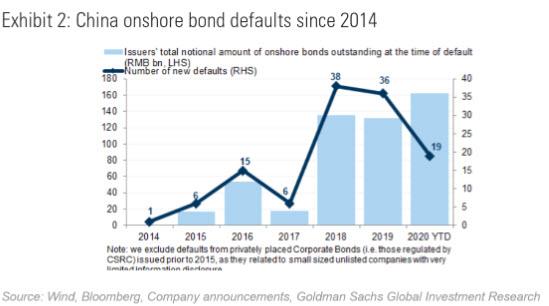 The U.S. trading session Thursday was dominated by concerns about the pandemic as Chicago issued an advisory urging residents to avoid leaving home. Bonds gained and stocks fell. Before the vaccine potentially brings life back to somewhat normal next year, investors have to face the reality that the virus resurgence may slow the economy in coming months and stimulus is nowhere to be seen during a lame-luck period on Capitol Hill.

It’s going to be tricky winter.

Traders On Edge As Futures Fail To Rebound After Wednesday Rout