As the coup against We The People progresses through the predicable stages of color revolution, it’s time to assess what the markets truly think about all of this.

Where oh where is capital flowing to and why?

Because if you answer that question you’ll get an idea of where things are truly headed.

And the big news of this week isn’t the 1500 point gap up on Monday’s open on the Dow Jones Industrials because Pfizer was given free air time to feed the algorithms.

That is especially true with the lack of sustained follow through all week, leaving a massive gap to be filled regardless of day’s bullish open.

That isn’t to say the Dow Jones isn’t in a bullish position. It is. But it is for far different reasons than, “Yay! COVID is over.” COVID’s not over, folks.

They are only getting started with the next round of fear mongering and intimidation to lock the country down again. You know, Dark Winter, and all that.

They’ve already done all this having locked down their populations over the dreaded ‘second wave’ which they created by not fighting the virus naturally but rather trying to hide from it.

That said, while this week is sketchy, leaving a gap to be filled on the chart, the Dow is in a good position in the larger picture, from last week’s set up.

But is that because of happy days returning or people fleeing Europe and chaos?

And that brings me to this week’s thesis: Bitcoin’s move above $14,000 is the most significant move by any market in the world. Period.

As a proxy for the entire cryptocurrency space, Bitcoin represents, alongside U.S. equities, the best option for normal people to maintain their wealth if they need to have it cross political borders.

As Martin Armstrong talks about all the time, it is the subtle shifts in capital flow which reveal what’s about to happen next in markets. That’s why I don’t use any complex tools when charting. I took at the bars in relation to each other and through time frames to get an idea of what the larger picture is.

Anything more complex, for me, creates analysis paralysis.

So, this is why bitcoin, in conjunction with the big move into stocks, is signaling the move of market players away from assets with higher counter-party risk towards assets with lower, effectively, default risk.

There are other signs, but given the significance of this week’s price action, I think these are your best signs.

Gold’s bounce off support near $1850 back toward $1900 today is a subtle sign. You can’t create the fiction of a Biden victory being good for markets without also fanning the flames of inflation and lack of faith in the government’s ability to service its debt.

Trump is refusing to concede and the Democrats’ rule in the House under severe challenge with the Republicans having flipped, so far, 10 seats. That number should rise once the vote challenges worm their way through the courts.

In any case there is no real resolution to this election that screams anything other than an MMA cage fight crossed with outtakes from Mad Max: Beyond Thunderdome.

Personally I think seeing Kevin McCarthy chasing Nancy Pelosi around with a chainsaw would be good for cable ratings. Gods know, AT&T could use the revenue boost.

None of this is instilling confidence in anyone with any sense. There will not be stable government in D.C. regardless of what happens between now and when the Electoral College votes.

It’s either the most vicious kind of gridlock or draconian power plays which result in a collapse of the union into the 2022 elections.

But what we can say is that capital is making its plans now. Chinese stocks are flying. Russian stocks are as well. Commodity prices are rising in structurally important places — copper, soybeans, corn, wheat, nickel, lead, meat.

And the promise from the elites Biden is a mouthpiece for is for more supply chain destruction. More fear. More liquidation of the middle class forced into submission through deliberate policy decisions in Washington, Albany, Sacramento, Lansing and Springfield.

That’s why bitcoin’s move above $14,000 is so important. Not only is this the highest weekly close in nearly four years, it signals a breakout from the broad consolidation pattern in place since it went parabolic in January 2018. 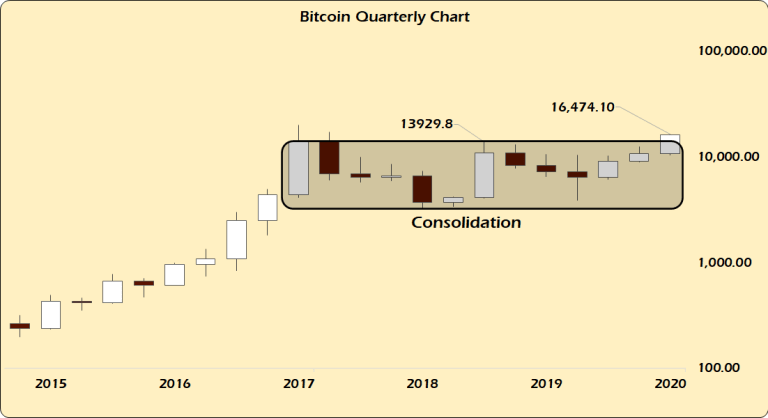 If history holds to supply and demand patterns after each of bitcoin’s previous reward pool halvings, we should see it skyrocket from here. All the fundamentals are there and they are all lining up perfectly.

But bitcoin isn’t the end all/be all of the crypto-space, bitcoin maximalist protests notwithstanding.

I’ve been chastised, mildly, by readers recently about my silence on other matters, such as the strong support privacy coins are starting to receive in the marketplace.

What I’ll say is this. I’ve been waiting for months to see the technical signal thrown by bitcoin before I would broaden my discussion of crypto.

If bitcoin wasn’t breaking out, if it was still being tossed around like gold through off-chain, cash-settled futures action on the CRIMEX, then there was no real hope of momentum driving into the alt-coin space.

And I’ve been right in that call. With the exception of Monero (XMR), most privacy-oriented coins have languished as Ethereum (ETH) and DeFi have dominated the crypto-talk along with bitcoin’s emergence as a store-of-value monetary asset.

And even Monero’s price action isn’t anywhere close to as strong as bitcoin’s (see chart below).

Now that the coup is in process to fully transform the U.S. into a technocratic police state nearly indistinguishable from Philip K. Dick’s Minority Report, having the discussion about privacy coins is appropriate.

Because the reality is that whether governments like it or not, capital flows to where it is treated best. And if the attacks on personal and financial privacy are going to accelerate into the Great Reset then those cryptocurrencies which offer not only good store-of-value propositions but also complete transaction anonymity will see a lot of inflows.

The reason Monero took off earlier in the year was it finally making privacy mandatory, rather than a user option. You have to opt-out of privacy when using Monero. This strengthens the privacy protocol by ensuring more input transactions to mix up to spit out clean outputs.

This is simply the best way to ensure a user can take their coins and break the chain-of-custody from the perspective of outside observers.

Monero’s chart is similar to, but not as technically strong as bitcoin’s. That said, the October close above the 2019 high was a strong signal that the rally in Monero is just beginning.

It has a long way to go to best the mania high of 2018 and won’t likely get there until bitcoin is much, much higher. And I’m seeing firming like this across the entire privacy space in coins like Zcash (ZEC) and DASH, though DASH is less privacy-focused and more normie-space medium-of-exchange focused.

The test for DASH this week is a close above $77.83. That should set up a trending move sympathetic with Bitcoin back towards the high above $100 from the summer.

From a tax perspective all the government can do is trace up to the point the money ‘disappeared’ and tax the transactions to that point. With most of the on-ramps to crypto, especially for Americans, KYC/AML compliant any initial capital gains taxes will be visible.

But after that it becomes a question of enforcement and diminishing returns for effort expended on the part of taxhounds. And from that perspective, the burgeoning DeFi sector is important because it is opening up the use-case arguments for cryptocurrencies expanding the potential pool of adopters overall, thereby making widespread enforcement that much harder to implement.

With Millennials looking at crypto far more favorably than my generation and especially the Boomers, draconian enforcement of tyrannical tax policy won’t last for long.

Moreover, if Biden thinks he’s going to raise the upper end tax rate to 70+% and not expect people to flood into crypto to avoid that kind of confiscatory taxation he’s insane.

The article Maria links to?

That’s what a Biden presidency will look like for every major city in America. Trump started this process with the tax cuts back in 2017, which I called the most politically significant piece of legislation since the New Deal when it was passed.

I was right. That’s why the Democrats had to cheat so badly last week. Their Blue Wall strategy was crumbling.

Where do you think that money will flow? China? A lot of it. But also into crypto. And if the governments do what Martin Armstrong is convinced they’ll do, track us all down and beat us for our private keys?

It’ll ensure there’s nothing left of us to fight the Chinese century with.

The question now is whether enough people are willing to fight against this disruption or not. The fourth amendment guarantees a right to privacy. The financial industry has written the laws to curtail that right as it pertains to money. FATCA, CAATSA, AML and KYC laws are all fundamentally unconstitutional especially as it pertains to purely private assets, like bitcoin.

Unfortunately, that argument was lost legally ages ago and we’ll see over the next few years where the practical limits of that kind of legal power lies in the face of simple-to-deploy technology that is nigh-impossible to shut down through a bureaucratic edict.

As things look today, the early signs of a flood of capital into cryptocurrencies is happening. Those who wait too long to diversify their savings there risk a complete wipe out.

I don’t think Tom Paine said, “Give me Privacy or Give me UBI?!”

Join my Patreon if you want help navigating the privacy coin space. Install the Brave Browser to siphon capital from Google’s wealth vacuum.

Central Banks Have Pumped An Annualized $23.4 Trillion Into The Financial System

American Apocalypse: The Government’s Plot To Destabilize The Nation Is Working