Tropical Storm Iota is brewing in the Caribbean Sea on Saturday. The storm could strengthen into a major hurricane early next week, with landfall forecasts for Nicaragua and Honduras, an area recently devastated by powerful Hurricane Eta (read: here & here).

As of Saturday morning, Iota has maximum sustained winds of 40 mph and is 340 miles south southeast of Kingston, Jamaica – moving southwest at five mph. By Monday or Tuesday, Iota could quickly strengthen to a major hurricane – Category 3 – with winds of at least 110 mph, the National Hurricane Center (NHC) said. 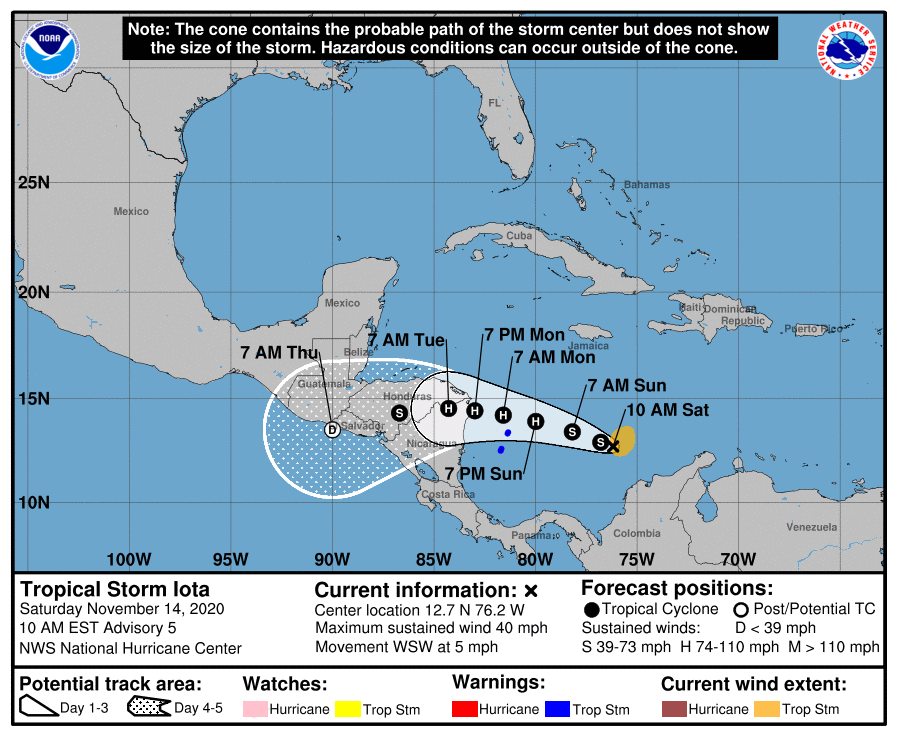 “This rainfall (from Iota) would lead to significant, life-threatening flash flooding and river flooding, along with landslides in areas of higher terrain,” the NHC said

Facing back to back storms, Central America could experience a massive economic loss of its most valuable crop: cocaine coffee.

AccuWeather Senior Meteorologist Dave Samuhel estimated Eta destroyed 10% of Central American coffee crop. He said this percentage could rise as Iota is set to strike the area in the coming days.

“AccuWeather estimates that additional impacts from Iota could be as much as another 10% to perhaps 25% loss as the region could be more susceptible to damage in the wake of Eta,” Samuhel said.

Coffee C contracts via Ice for December rose after Eta made landfall in Central America. With Iota honing in on the region, Coffee futures could see additional support in the week ahead.

Iota is 30th named storm in the Atlantic basin this year – a record-breaking year for any hurricane season.

The Market’s Invisible Guardrails Are Missing

The Antifa rioters, looters, arsonists, vandals, and murderers have at least one confirmed ally in Congress: AOC