In his latest Weekly Kickstart note published late on Friday, Goldman’s David Kostin correctly notes that with all eyes on two major macro catalysts in recent weeks –the US elections and the potential for imminent vaccine approval – investors had mostly overlooked the 3Q earnings season. According to Kostin, this “lack of focus” was reflected in the unusual price performance of stocks beating on EPS during the recently-concluded earnings season, namely that whereas in the past, stocks that surpass consensus expectations typically outperform the S&P 500 by 100bps the trading day after reporting, this quarter those firms outperformed by just 9bp, the smallest in our 15-year history outside of 2Q 2017.

Incidentally, a few weeks earlier Bank of America put its own spin on this phenomenon, writing that the lack of upside which is due to stocks being priced to perfection, “smacks of the Tech Bubble, which was the only earnings season in history when surprises saw perverse rather than intuitive reactions – beats were not rewarded and misses were not penalized.” The bank then ominously warned that “the market cracked after the 2Q earnings season when this happened.” 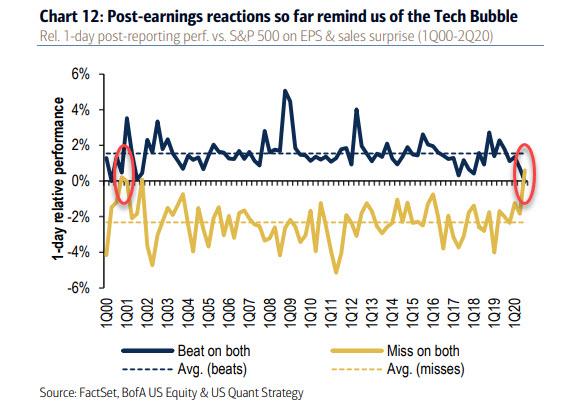 Whether the Q3 earnings reaction is indicative of a lack of investor focus, of euphoria having been pried-in, or is simply a rehash of the previous bubble top remains to be seen, but one notable point made by Kostin is that “margins, more than sales, were the primary source of upside surprises in 3Q” which suggests that once again companies were drastically cutting back on overhead – read laying off workers aggressively. 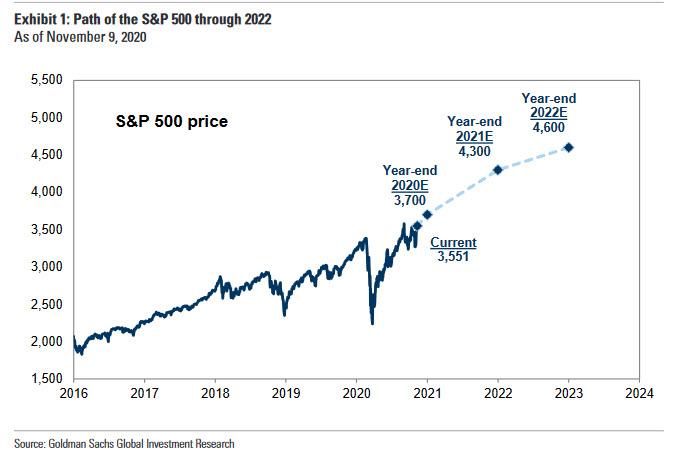 … by defending Goldman’s hyper-optimistic EPS outlook: according to the chief strategist, “strong 3Q results and our economists’ optimistic growth outlook support our above-consensus EPS estimates for 2021.” To wit, following the better-than-feared 17% decline in 2020, Kostin now forecasts S&P 500 EPS will grow by 29% in 2021 to $175, which would be 6% above the pre-pandemic level in 2019 ($165). It’s all uphill from there as the following chart forecasting even more perfection until 2024 shows: 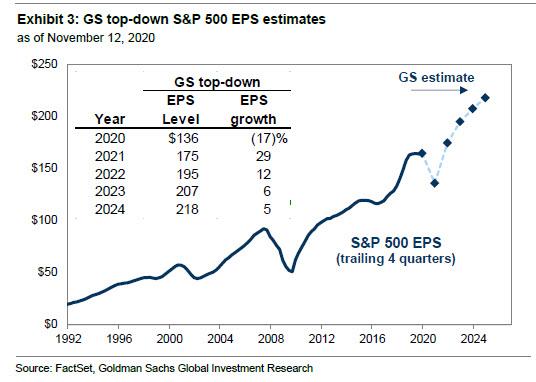 Here’s how Kostin “gets” his ultra-cheerful numbers: “economic growth is the primary driver of earnings growth. Our US economists expect annual average real US GDP growth of 5.3% in 2020, 150 bp above consensus (+3.8%).” In addition to what even Kostin admits is an “optimistic outlook” based on above-consensus earnings estimates, the Goldman strategist also expects S&P 500 EPS to benefit from i) a weakening USD, representing a tailwind to sales, and ii) labor market slack, adding to the tailwind for profit margins.

Importantly, the forecast assumes at least one vaccine is approved by January and widely distributed across the US in 1H 2021, to wit: “We expect additional positive EPS revisions toward our forecasts in coming months as vaccines are approved and distributed and accelerate the economic and earnings rebound.”

In addition to the top-line rebound, the cost cutting evident in 3Q earnings reports suggest higher revenues should lead to a sharp margin rebound next year. Translation: don’t expect a hiring spree any time soon now that company have learned they can do more with less.

One final key assumption comes in the form of Goldman’s expectation that a $1 trillion fiscal package will eventually be passed “but not until early 2021, therefore posing a potential downside risk to 4Q 2020 EPS, and potentially also longer-term risks if fiscal aid is too small or too late to avoid major economic scarring.”

Still, that risk too, is too small for Goldman to incorporate into its base case which, as shown above, see the S&P rising by over 1,000 points over the next two years.

In other words, in its base case projection, the bank sees nothing going wrong with the economy or markets until the next presidential election. 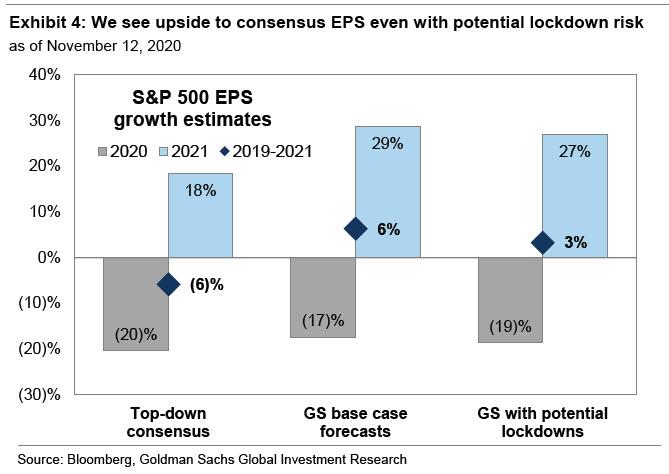 While we reserve judgment on whether Goldman is right or not (or right but for the wrong reasons, since none of this will matter once the Fed launches another major QE expansion in early 2021 as we previewed overnight) we will highlight on factual observation, namely which companies have been hit the hardest by covid, and thus stand to benefit the most from a vaccine.

Assuming a vaccine is approved – and one most likely will be approved in the coming weeks –  Goldman highlights a list of stocks where the largest gap exists between the current consensus expectations for 2021 EPS and pre-pandemic EPS in 2019. Goldman expects vaccine approval and distribution to serve as a catalyst to drive positive EPS revisions in many of the hardest-hit industries and most virus-exposed companies. As context, the median company in the S&P 500 is anticipated to generate 2021 EPS that is 7% above its level of last year. In contrast, the 39 stocks shown below are anticipated to generate EPS next year that is still less than half the level of EPS realized in 2019. 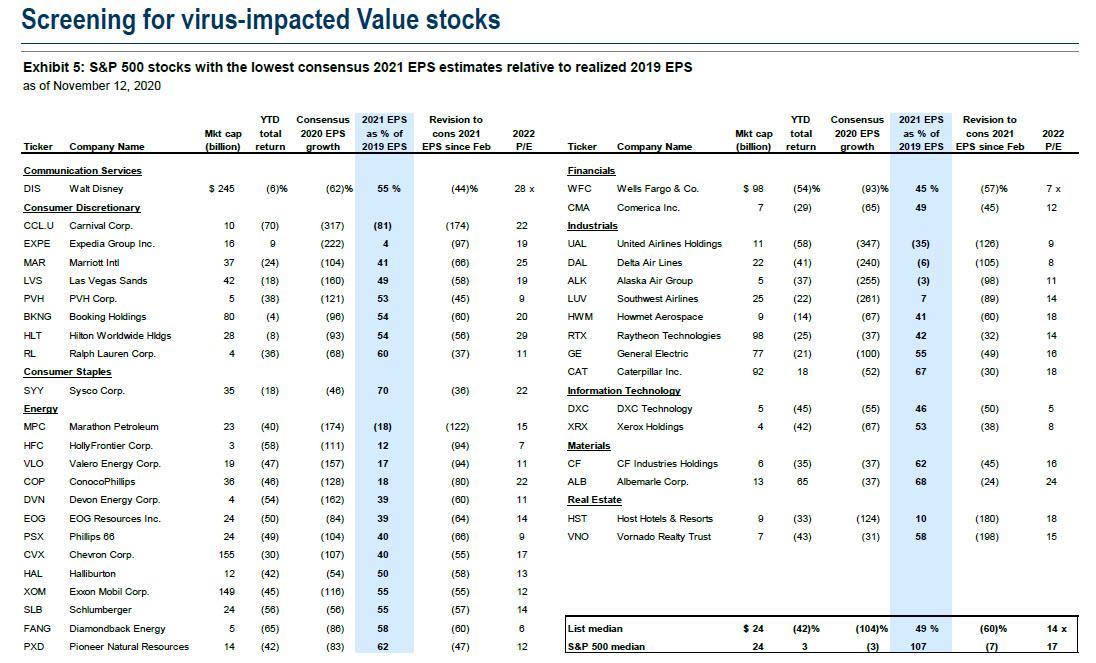 Ultimately, Goldman’s recommendation is to go long some or all of these deep Value stocks as part of a barbell with long-term positions in secular growth stocks. Or in other words, the bank is long both the FAAMGs – which benefit from a continuation of the status quo – and the “deep value” names that will soar should the covid situation normalize or if sustainable reflation finally emerges.

The Most Important Paper I’ve Ever Written