It seems like only yesterday that Wall Street was writing massive research reports how the Millennials were going to “make a difference” in the world as a result of their “pent up” purchasing power which was just waiting to be unleashed. Unfortunately, in retrospect the Millennials were a huge disappointment, having made absolutely no “difference” in the world (the Fed decided to make if it for them) despite having created millions of ingeniously airbrushed Instragram posts. And so, with Wall Street desperate to pin its hopes on someone who will prove to be the spending dynamo that pushes the US economy out of the doldrums – which is Millennials were supposed to be – the street has shifted it attention to those next in line, namely…

In one of its massive “thematic investing” primers which doubles as a paperweight thanks to its hundred + pages of recycled content (copy a chart, replace Millennials with Gen Z, paste) Bank of America writes that “Here come the Zillennials! Gen Y is out, Gen Z is in” (which is oddly reminiscent of a similar primer the bank wrote a few years back when it said virtually the same things about Millennials).

But we digress: in an intro that will hardly endear Bank of America to the millions of 20-year-olds who are supposed to change the world, now that Gen Y has been cast into the trash bucket of demographics, the bank writes that “despite having an attention span shorter than a goldfish’s (8 seconds) Gen Z is the most disruptive generation ever and sees themselves as ‘citizens of the world’.

It only gets funnier better: The bank next claims that the generation that was born online and is now entering the workforce “is compelling other generations to adapt to them, not vice versa.” We doubt any Gen Z employers actually agree with that laughable assessment in a labor market where they can hire far more experienced unemployed substitutes from Gen X, and even Boomers (while getting some actual work ethic in the bargain).

To make its recycled argument that Millennials Gen-Z will change the world, BofA argues that this generation “is set to grow incomes 5x to $33tn by 2030 and will surpass Millennials by 2031.” Right… maybe if the Fed deposits trillions into their digital dollar accounts.

Sarcasm aside, and while there is much, much more in the full note, a quick recap of the points made by BofA analyst Haim Israel is that the “clicktivist” generation is “socially involved” that spend much of their time online, with 40% preferring to hang out with friends virtually rather than in person. 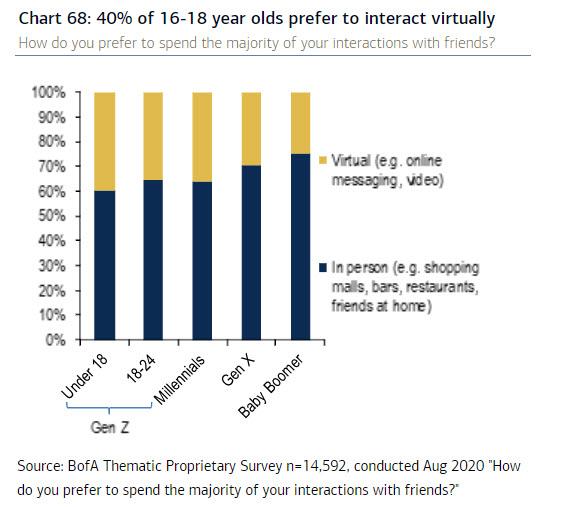 He adds that “having lived through the ’08 Financial Crisis and seeing its impact on their families, they are financially conservative and cautious about credit cards and taking on debt. Sectors that stand to benefit from Gen Z include eCommerce, payments, luxury, media and ESG while those structurally challenged include alcohol, meat, cars, shopping malls and old media.”

Below we present some of the more notable excerpts from the massive “generational” report:

Here come the Zillennials! Gen Y is out, Gen Z is in

They’ve never known a life without Google, 40% prefer hanging out with friends virtually than in real life, they will spend six years of their life on social media and they won’t use credit cards. They’re the ‘clicktivists’: flourishing in a decade of social rights movements, with 4 in 10 in our proprietary BofA seeing themselves as ‘citizens of the world’. The Gen Z revolution is starting, as the first generation born into an online world is now entering the workforce and compelling other generations to adapt to them, not vice versa. Thus, about to become most disruptive to economies, markets and social systems.

Gen Z’s economic power is the fastest-growing across all cohorts. This generation’s income will increase c.5x by 2030 to $33tn as they enter the workplace today, reaching 27% of global income and surpassing Millennials the year after. The growing consumer power of Gen Z will be even more powerful taking into account the ‘Great Wealth Transfer’ down the generations. The Baby Boomer and Silent generation US households alone are sitting on $78tn of wealth today.

Gen Z could be EM’s secret weapon. APAC income already accounts for over a third of Gen Z’s income and will exceed North American and European combined income by 2035. ‘Peak youth’ milestones are being reached across the developed markets – Europe is the first continent to have more over-65s than under-15s, a club North America will join in 2022. In contrast, India stands out as the Gen Z country, accounting for 20% of the global generation, with improved youth literacy rates, urbanisation, and rapid expansion of technological infrastructure. Mexico, the Philippines and Thailand are just a few of the EM countries that we think have what it takes to capitalize on the Gen Z revolution.

Gen Z is the online generation: nearly half are online ‘almost constantly’ and a quarter of them will spend 10+ hours a day on their phone. In our survey, over a quarter of Gen Z’s top payment choice was the phone, while credit cards weren’t even in their top 3. This generation is the least likely to pick experiences over goods, and values sustainable luxury – choosing quality over price as their top purchase factor.

Only half of US teens can drive, while our survey finds that less than half of Gen Z drink alcohol, and more than half have some kind of meat restriction. A third of them would trust a robot to make their financial decisions. Gen Z’s activist focus filters into their interactions with business, too – 80% factor ESG investing into their financial decisions, and they have also driven consumer-facing sustainability campaigns, such as single-use plastics. Harmful consumer sectors, such as fast fashion, may be the next focus.

When were you born?

Generations at a glance 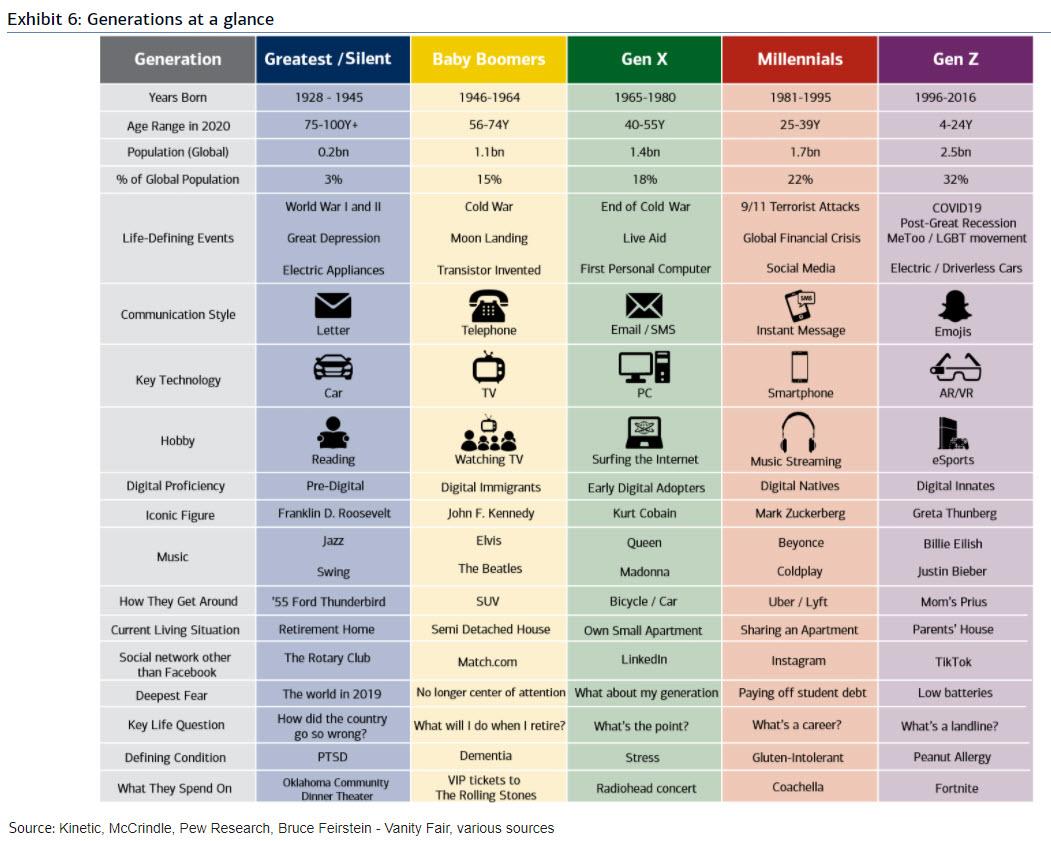 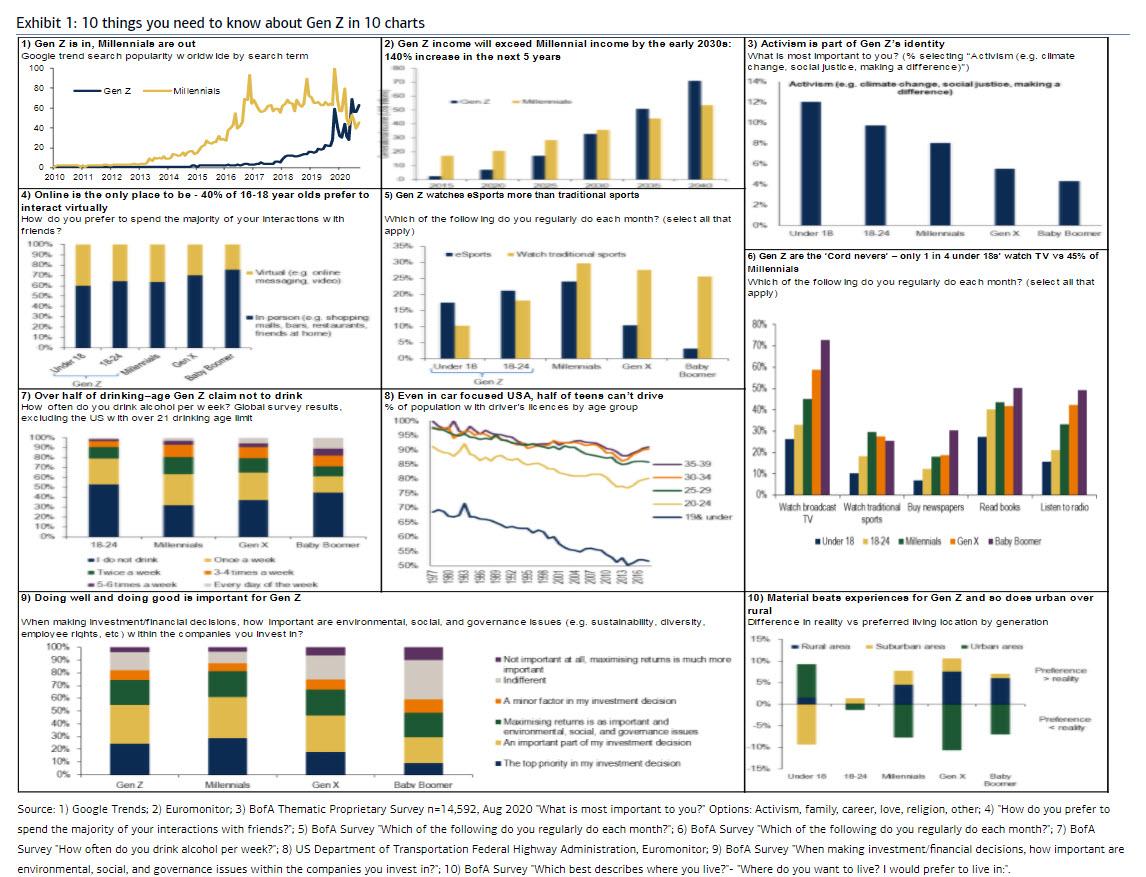 Interest in Gen Z continues to grow, surpassing Millennials, as the new generation of consumers, workers, entrepreneurs and activists start to make their mark. We argue that businesses and investors need to start adjusting their strategies to reflect the growing political, social, and economic influence of this generation. 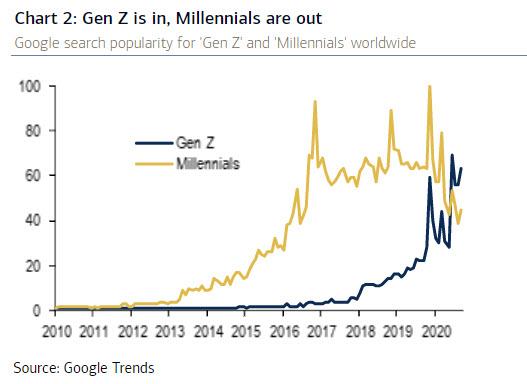 Gen Z, born between 1996 and 2016, just entering the workforce, is the largest at 2.5bn individuals, accounting for 32% of the global population (source: Euromonitor, UN).

Of the 2.5bn Gen Z worldwide, 89% live in emerging and developing markets vs 72% in 1950. India, China, Nigeria, Indonesia, and the US are the five largest, accounting for 44% of the total Gen Z population. Specifically, India and China make up 19.8% and 13.7% of the global Gen Z population, respectively, while all other countries individually account for less than 4% each (source: UN, Euromonitor).

Gen Z, born between 1996 and 2016, is the largest population at 2.5bn accounting for a third of the global total. Already, Gen Z has $7tn of income. In addition, this influential generation has the fastest-growing income, set to increase 140% in the next five years to $17tn in 2025 and $33tn by 2030. Gen Z is set to overtake Millennials’ total income by the early 2030s. The largest Gen Z markets by income are the US and China at $1.2tn and $1.1tn, respectively, followed by India, Japan, Germany, the UK and France. The influence of this generation is set to grow further as the great wealth transfer from Baby Boomers and Silent generation, who own $78tn in the US alone, is about to begin.

In contrast to Millennials, Gen Z have grown up in the shadow of the Great Financial Crisis in 2008-09 and during a decade of social activism. Social issues form part of Gen Z’s identity. They are digital dependents rather than Millennial digital pioneers. Also, the generation is more fiscally conservative than Millennials. However, some demographic factors remain similar for the two generations; both are delaying marriage, children, and homeownership, as well as postponing other traditional consumer purchases.

Gen Z are not Millennials 2.0

Gen Z are different from Millennials. They don’t know a life without Google. They grew up in the aftermath of the financial crisis and flourished as social rights for LGBTQ+ and movements such as #metoo came to the fore. Also, they have experienced the brunt of the effects of the pandemic on their prospects as they enter the workforce. These experiences have shaped Gen Z to be a very different generation from Millennials – key activists on climate change, fiscally cautious, valuing luxury/quality over quantity, and better skilled for an automated world. We think financial markets often underestimate these differences, assuming Gen Z to be the same as their predecessors, missing the distinctions that help understand the changing new consumer. 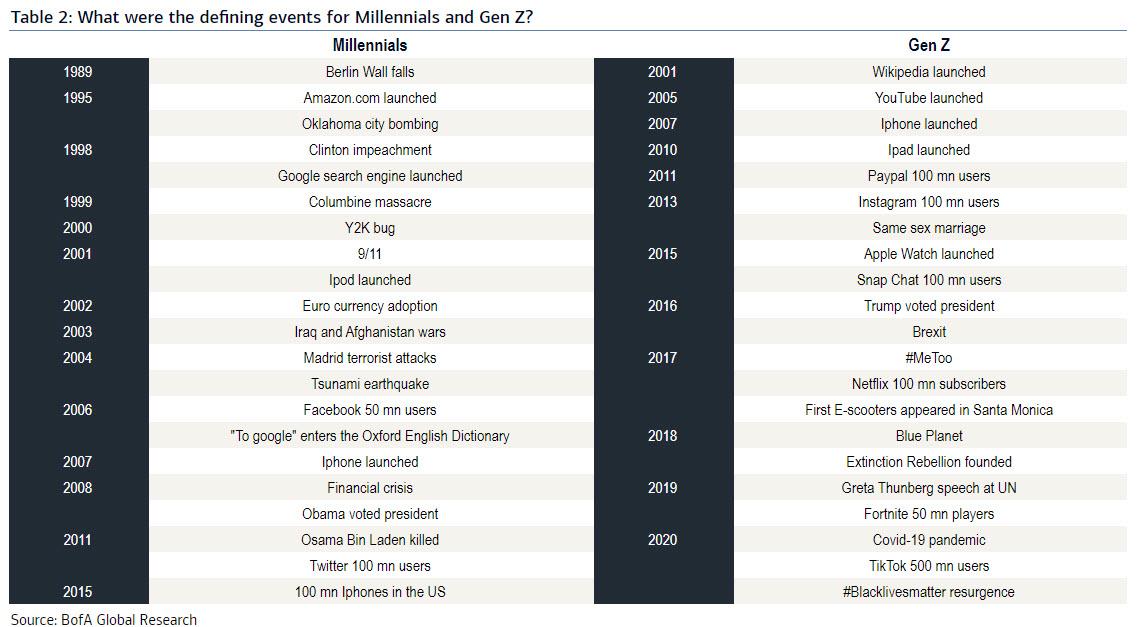 Activism forms part of Gen Z’s identity. Over 10% of Gen Z and 12% of under 18s surveyed claimed that activism was their priority over all other options, such as family, love, career, etc. This compares with 8% of Millennials and 4% of Baby Boomers. This activism will influence Gen Z’s decisions across sectors, from consumption of goods to education, work choices and financial investments.

Gen Z is most concerned about climate change and social unrest

Gen Z’s passion for social causes directly translates into their major concerns. All generations are concerned about the economy and recession. However, Gen Z are the most concerned when it comes to social unrest and climate change. Even among Millennial and Gen Z Republicans, there is a much greater openness to clean energy and progressive climate change policy. 79% of Millennials and Gen Z that are Republican or Republican leaning think the US should be prioritising alternative energy sources compared with 55% of Baby Boomer Republicans and 91% of Democrats. 49% of young Republicans believe the government is doing too little to reduce the effects of climate change, double the share of Baby Boomer Republicans (source: Pew Research 2020).

The BofA Thematic Demographics Survey polled over 14,500 consumers aged 16 and over across the US, UK, France, Germany, Japan, South Korea, China, India, Mexico, and Brazil. The survey was undertaken in late August 2020 and was an internet-based survey. A few key results:

How will Gen Z impact industry? 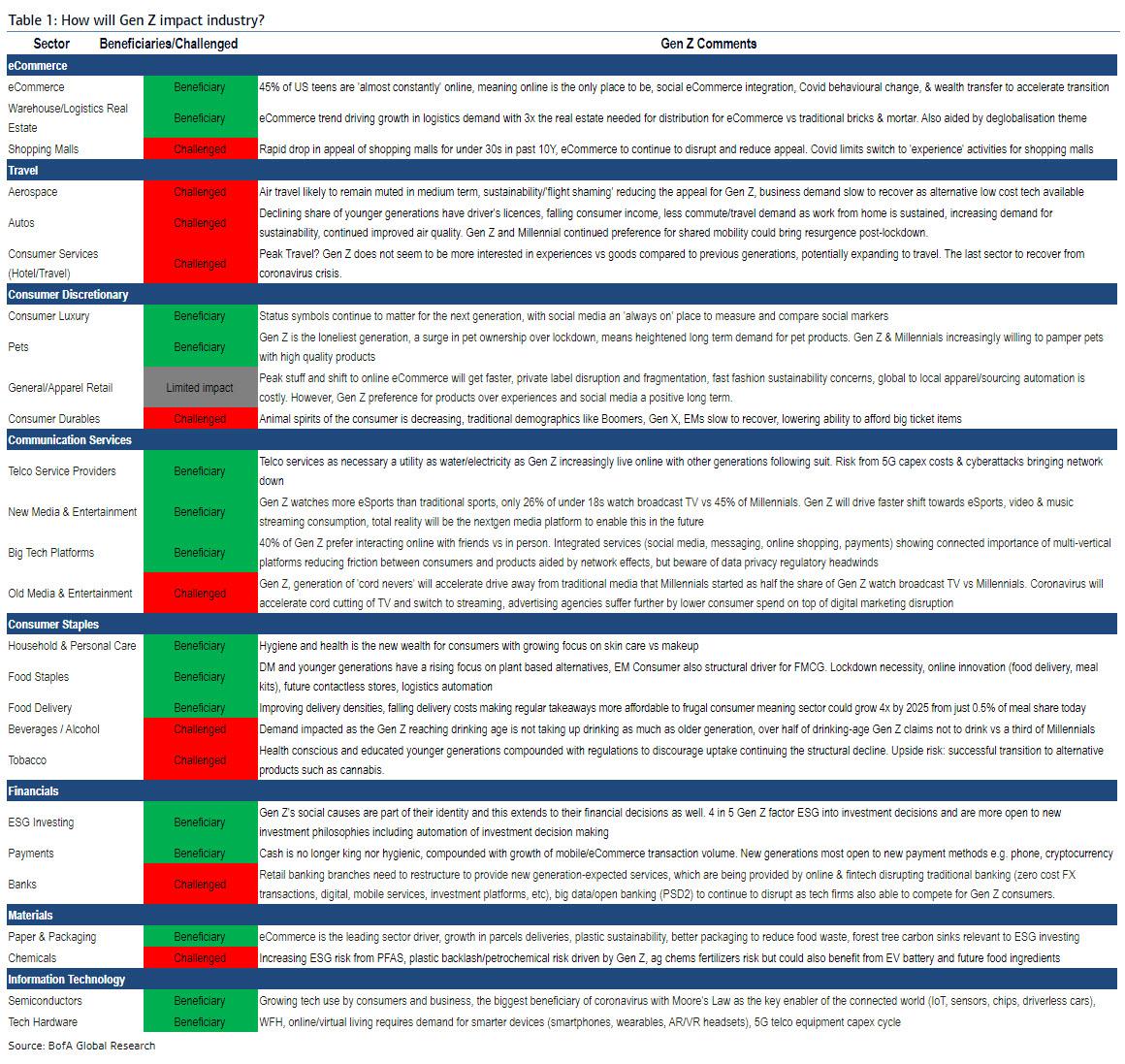 For much more, contact your local BofA sales coverage for the full report.

Are frozen wind turbines partially to blame for Texas blackouts?