Authored by Glenn Greenwald via greenwald.substack.com,

Due in part to a self-interested desire to re-establish their monopoly on discourse by crushing any independent or dissenting voices, and in part by a censorious and arrogant mindset which convinces them that only those of their worldview and pedigree have a right to be heard, they largely devote themselves to complaining that Facebook, Google and Twitter are not suppressing enough speech. It is hall-monitor tattletale whining masquerading as journalism: petulantly complaining that tech platforms are permitting speech that, in their view, ought instead be silenced. 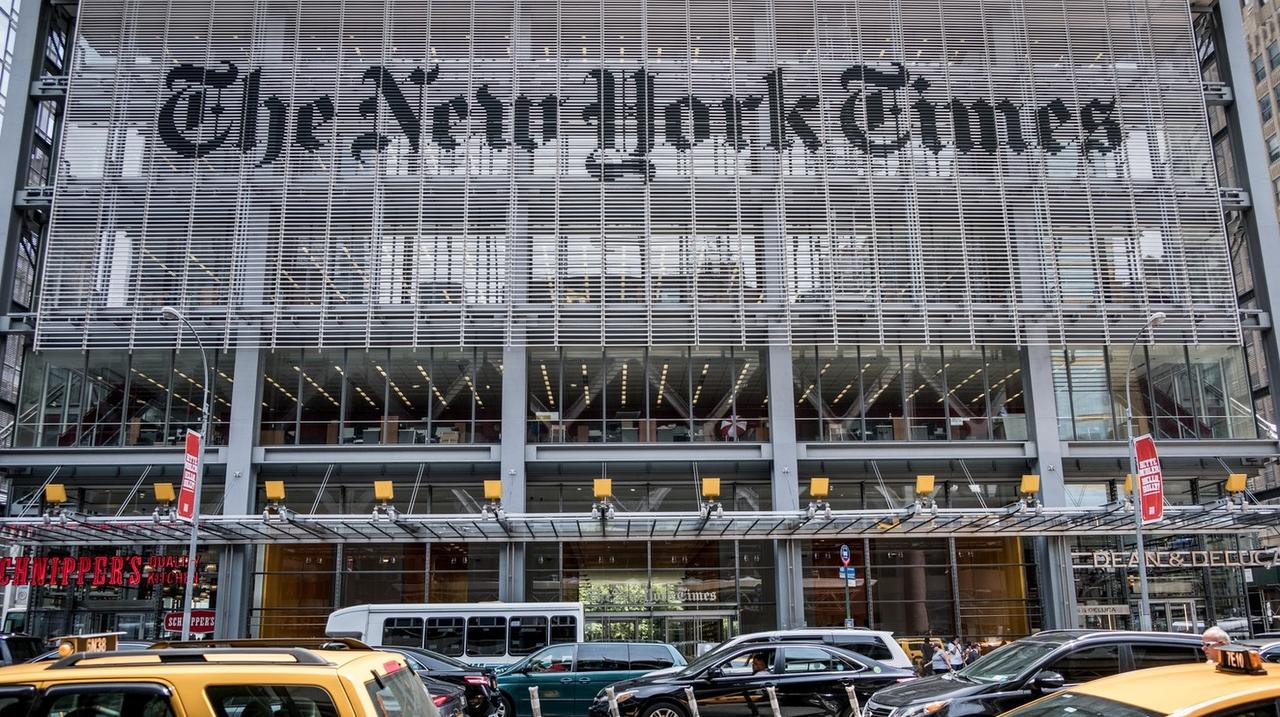 In Tuesday’s New York Times, three of those censorious tech reporters — Kevin Roose, Mike Isaac, and Sheera Frenkel — published an article on Facebook’s post-election deliberations over how to alter its algorithms to prevent the spread of what they deem “misinformation” regarding the election. The most consequential change they implemented, The New York Times explained, was one in which “hyperpartisan pages” are repressed in favor of promoting “a spike in visibility for big, mainstream publishers like CNN, The New York Times and NPR” — a change the Paper of Record heralded as having fostered “a calmer, less divisive Facebook.”

More alarmingly, the NYT suggested (i.e., prayed) that these changes, designed by Facebook as an election-related emergency measure, would instead become permanent. Marvel at these two paragraphs and all of tenuous and self-serving assumptions buried in them: 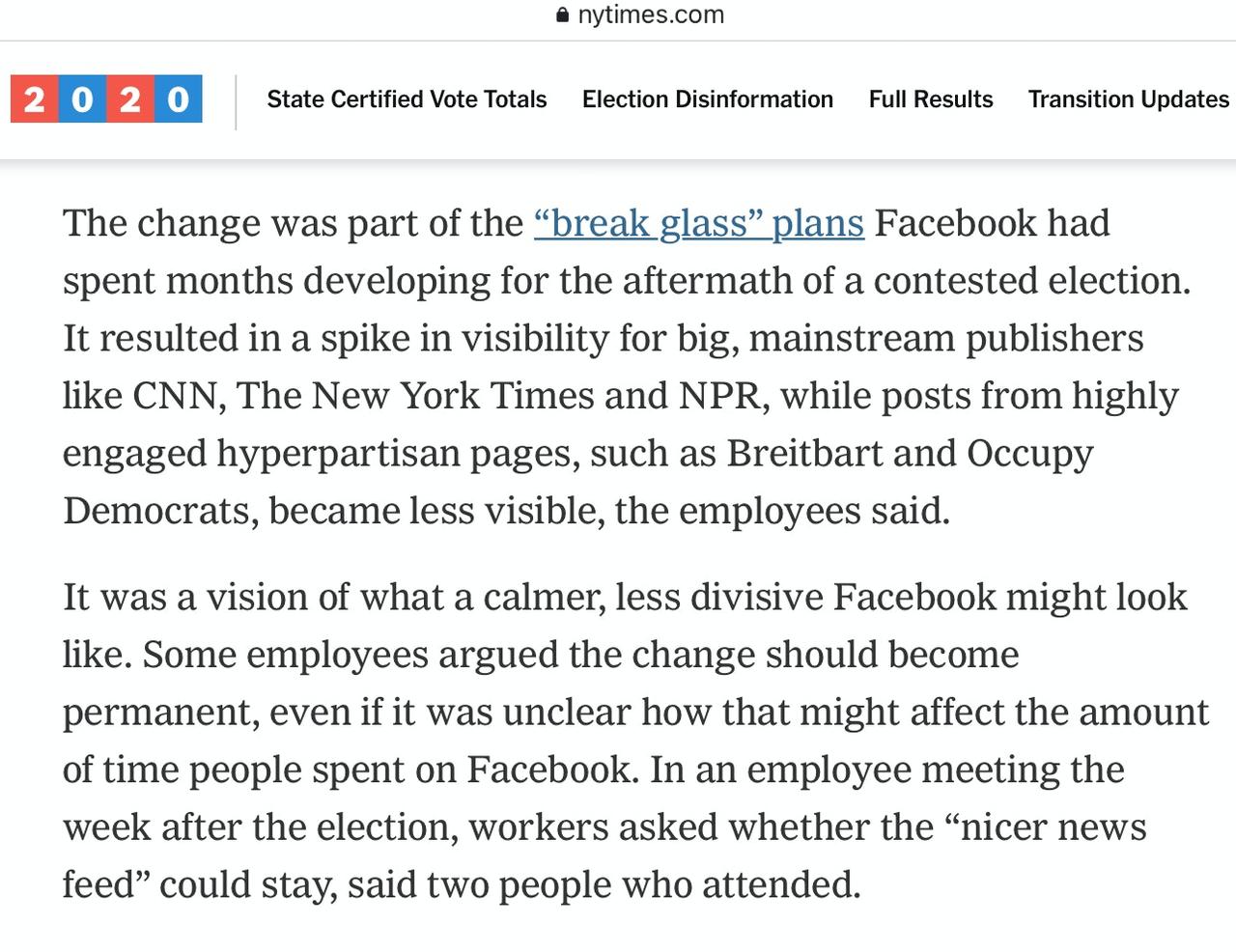 The conceit that outlets like The New York Times, CNN and NPR are the alternatives to “hyper-partisan pages” is one you would be eager to believe, or at least want to induce others to believe, if you were a tech reporter at The New York Times, furious and hurt that millions upon millions of people would rather hear other voices than your own, and simply do not trust what you tell them. Inducing Facebook to manipulate the algorithmic underbelly of social media to artificially force your content down the throats of citizens who prefer to avoid it, while rendering your critics’ speech invisible — all in the name of reducing “hyper-partisanship,” “divisiveness,” and “misinformation” — is of course a highly desirable outcome for mainstream outlets like the NYT.

The problem with this claim is that it’s a complete and utter fraud, one that is easily demonstrated as such. There are few sites more “hyper-partisan” than the three outlets which the NYT applauded Facebook for promoting. In the 2020 election, over 70 million Americans — close to half of the voting population — voted for Donald Trump, yet not one of them is employed by the op-ed page of the “non-partisan” New York Times and are almost never heard on NPR or CNN. That’s because those news outlets, by design, are pro-Democratic-Party organs, who speak overwhelmingly to Democratic readers and viewers.

It is hard to get more partisan than the news outlets which the NYT tech reporters, and apparently Facebook, consider to be the alternatives to “hyper-partisan” discourse. In April, Pew Research asked Americans which outlet is their primary source of news, and the polling firm found that the audiences of NPR, CNN and especially The New York Times are overwhelmingly Democrats, in some cases almost entirely so: 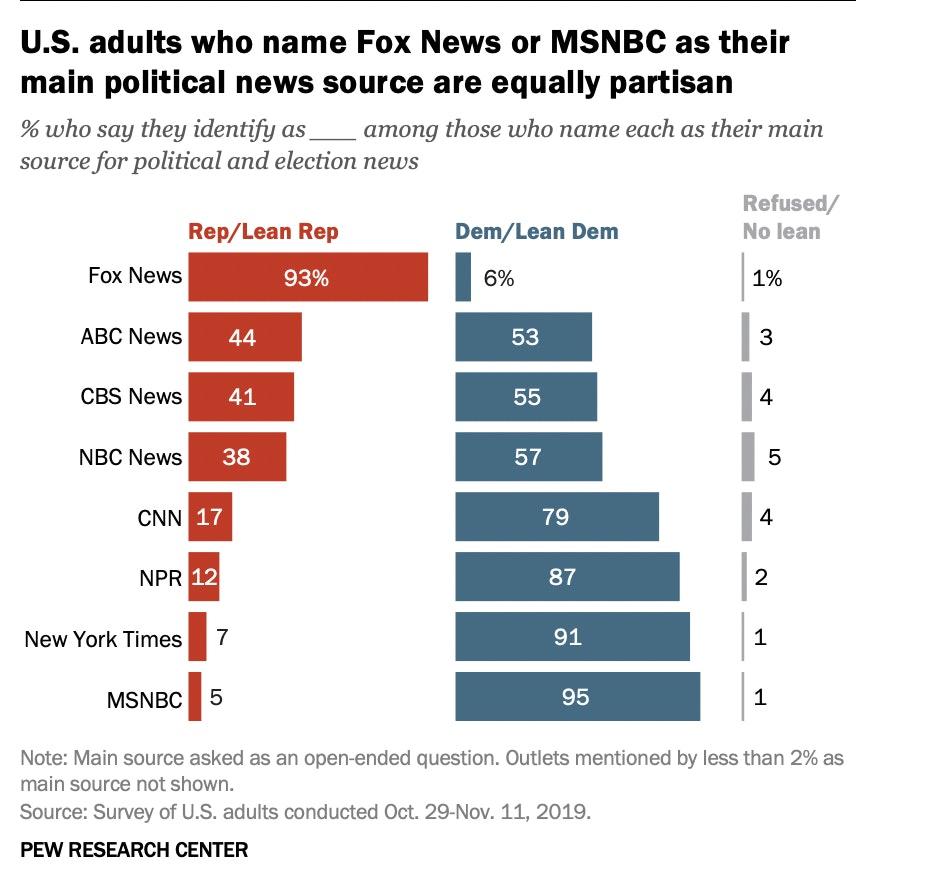 As Pew put it: “about nine-in-ten of those who name The New York Times (91%) and NPR (87%) as their main political news source identify as Democrats, with CNN at about eight-in-ten (79%).” These outlets speak to Democrats, are built for Democrats, and produce news content designed to be pleasing and affirming to Democrats — so they keep watching and buying. One can say many things about these news outlets, but the idea that they are the alternatives to “hyper-partisan pages” is the exact opposite of the truth: it is difficult to find more hyper-partisan organs than these.

Then there is the question of who does and does not spread “misinformation.” It is rather astonishing that the news outlets that did more than anyone to convince Americans to believe the most destructive misinformation of this generation: that Saddam had WMDs and was in an alliance with Al Qaeda — The New York Times, The Atlantic, NBC and The New Yorker — have the audacity to prance around as the bulwarks against misinformation rather than what they are: the primary purveyors of it.

Over the last four years, they devoted themselves to the ultimate deranged, mangled conspiracy theory: that the Kremlin had infiltrated the U.S. and was clandestinely controlling the levers of American power through some combination of sexual and financial blackmail. The endless pursuit of that twisted conspiracy led them to produce one article after the next that spread utter falsehoods, embraced reckless journalism and fostered humiliating debacles. The only thing more absurd than these hyper-partisan, reckless outlets posturing as the alternatives to hyper-partisanship is them insisting that they’re the only safeguards against misinformation.

Note how insidiously creepy is The New York Times’ description of a censored, regulated internet. They call it “a vision of what a calmer, less divisive Facebook might look like,” and claim an unnamed Facebook employee described it as “a nicer news feed.”

Yes, discourse that is centralized and regulated, where no dissent is tolerated, where alternative voices are silenced, is always “calmer” and “less divisive.” That’s always the core goal of censorsing speech and ideas: to eliminate “divisiveness” and to pacify the population (“calmer” and “nicer”). That is always the result when orthodoxies imposed downward from the most powerful institutions of authority can no longer be meaningfully challenged.

The censorious mentality being peddled with increasing aggression is always chilling and dangerous. That it is media outlets — which ought to be the most vocal champions of free discourse — instead taking the lead in begging and pressuring Silicon Valley to censure the internet more and more is warped beyond belief. The internet should be free and left alone, especially by those with their record of deceit and propaganda.

Indeed, if we are to have it an internet controlled from above by unseen tech overlords in the name of eliminating “hyper-partisanship” and “disinformation” and fostering a “calmer” and “nicer” population, the sites now being artificially and manipulatively promoted are the absolute last ones who can credibly claim entitlement to that benefit.

Politicians Live In A Parallel Universe

The New Euro Stimulus Won’t Save the Greek Economy