Will a vaccine cure the 20-year “Widow-Maker” trade?

In 1999, a media personality stated that “investing like Warren Buffett was like driving dad’s old Pontiac.” Of course, that was at the height of the Dot.com bubble, and soon after, “value investing” paid off. Unfortunately, it didn’t stick.

It wasn’t just 1999. In 2007, individuals were chasing the “momentum” in the real estate market. Individuals left their jobs to pursue riches in housing. They were willing to “pay any price” under the assumption they would be able to sell higher. Of course, it was not long after Ben Bernanke uttered the words “the subprime market is contained,” the dreams of riches evaporated like a “morning mist.”

In 2020, investors are again chasing “growth at any price” and rationalizing overpaying for growth. As I discussed in the “Death Of Fundamentals:”

Chart updated as of November 2020

Given the massive government and Federal Reserve interventions over the last decade, it should be of no surprise that “growth” has outperformed. For “value investors,” it has been a “decade of pain.” The rise of passive indexing, algorithmic trading, and massive amounts of liquidity have destroyed price discovery in the markets.

In a recent discussion on “Value Is Dead,” we referenced a Research Affiliates article that noted the under-performance reasons.

“An investment strategy, style, or factor can suffer a period of underperformance for many reasons.

If the first three reasons imply the style no longer works, and will not likely benefit investors in the future, the last two reasons have no such implications.

With today’s value vs. growth valuation gap at an extreme (the 100th percentile of historical relative valuations), it sets the stage for a potentially historic outperformance of value relative to growth over the coming decade.”

The underperformance is quite stunning. The chart shows the difference in the performance of the “value vs growth” index. The index compares the pure value to a pure growth index, with each based on a $100 investment. While value investing always provides consistent returns, there are times when growth outperforms value. The periods when “value investing” has the most significant outperformance, as noted by the “blue shaded” areas, are notable.

When things ultimately go “pear-shaped,” the return to value tends to be a swift event. For investors, it is crucial to grasp what decades of investment experience tell us about the future. When the cycle turns, we have little doubt the value-growth relationship will revert to its long-term mean.

Is The Vaccine Announcement The Turning Point

Recently, Kevin Muir published a piece with an important message:

“The virus is done. The scientists won. They nailed it…markets will look through any (short term) negatives and realize the end is in sight.”

He goes on to make a case for “why” the Pfizer vaccine (and the other vaccines that will follow) may be the “silver bullet” that the market has been waiting for. Kevin’s view is the market is a discounting mechanism, and the “Smart Money” will focus on the future. Primarily, he hopes, the “Buying Value/Selling Growth” trade, which has been a widow-maker trade for the past 20 years, will be changed by the “vaccine.”

I doubt the “vaccine” will cure the ills of “value” any time soon as it does not address the primary issues driving the “momentum chase” currently. Refer back to the Research Affiliates comments above.

Does a vaccine change:

The “vaccine” does not cure the most massive problem for value stocks – actual value.

The Lack Of Value In “Value”

As a “fundamental” and “value” based investor, the lack of performance in value versus growth has undoubtedly been frustrating. However, one of the biggest problems is the astonishing lack of value in “value.”

Be careful about what you are paying for. pic.twitter.com/P6wkg2kb4O

The chart is pretty stunning but needs some explanation.

Here is the issue with intangible assets.

In many cases, the value of intangible assets is often overly optimistic assumptions about the companies worth. We recently quoted Raconteur on this particular issue:

“Tangible assets are easy to value. They’re typically physical assets with finite monetary values, but over the years have become a smaller part of a company’s total worth. Technology disruption continues in artificial intelligence, robotics and cloud computing. As such, intangible assets have grown to represent the lion’s share of corporate valuations. But without a physical form and the ability to easily convert them into cash, working out what these assets are truly worth can be challenging.”

The most significant problem for the majority of companies in the “value” space is debt. As we have discussed previously, in just the last 10 years, the triple-B bond market has exploded from $686 billion to $2.5 trillion—an all-time high.

“To put that in perspective, 50% of the investment-grade bond market now sits on the lowest rung of the quality ladder.

And there’s a reason BBB-rated debt is so plentiful. Ultra-low interest rates have seduced companies to pile into the bond market and corporate debt has surged to heights not seen since the global financial crisis.” – John Mauldin

The debt issuance is problematic as companies used it for non-productive investments such as stock buybacks and dividend issuance as corporate profitability remained extraordinarily weak over the last decade.

As discussed in “The Importance Of The Buffett Indicator,” corporate profits are at the same level as in 2009, while markets are at all-time highs. Exactly where is the “value?” 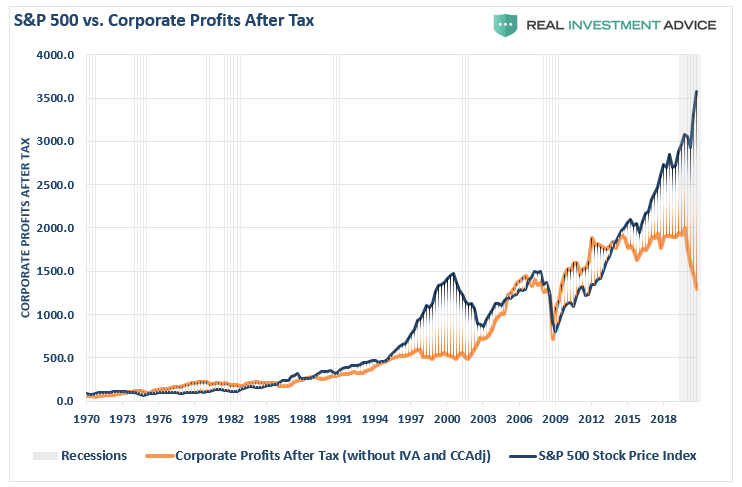 Notably, corporate profits are a reflection of economic growth rates, and a “vaccine” will not cure the problem plaguing profitability long-term—the debt.

The problem with the “vaccine will lead to a value rotation,” is such would require more robust economic growth and higher rates for increased profitability.

Here is where the “rotation to value” runs into problems.

Let’s start with the banks.

If interest rates were to rise substantially, the economy contracts due to the economy’s massive debt levels. We showed this specifically in “The Fed Will Monetize All Debt Issuance..”

“In an economy laden with $75 Trillion in total debt, higher interest rates have an immediate impact on consumption, which is 70% of economic growth. The chart below shows this to be the case, which is the interest service on total credit market debt. (The chart assumes all debt is equivalent to the 10-year Treasury, which is not the case.)”

What about energy stocks?

No one believed me in 2017 when I stated that oil prices were going to remain low.

“With respect to investors, the argument can be made that oil prices could remain range-bound for an extremely long period of time as witnessed in the 80’s and 90’s.“

Energy companies still have a massive supply/demand imbalance that existed long before the “pandemic” hit the economy. While a vaccine may provide a short-term boost, the underlying fundamentals are still not supportive of a long-term rotation.

A vaccine will not solve the longer-term problems plaguing weaker economic growth rates and stronger fundamentals.

As we discussed previously in the “One-Way Trip Of American Debt,” the economic growth rate has been undermined by the surge in debt over the last decade.

“Before the “Financial Crisis,” the economy had a linear growth trend of real GDP of 3.2%. Following the 2008 recession, the growth rate dropped to the exponential growth trend of roughly 2.2%. Instead of reducing the debt problems, unproductive debt and leverage increased.”

As stated, the sectors believed to be part of the “value trade” requires stronger economic activity. Such would lead to higher rates of inflation and higher interest rates.

In an economy supported by debt, rates must remain low. Therefore, the Federal Reserve has no choice but to monetize as much debt issuance as is needed to keep rates from substantially rising. The byproduct of those actions is weaker economic growth and lower rates of inflation. As shown, since 2009, inflation has consistently run well below the Fed’s target.

Unfortunately, higher levels of debt continue to retard economic growth keeping the Fed trapped in a debt cycle as hopes of “growth” remain elusive. The current 5-year average inflation-adjusted growth rate is just 1.64%, a far cry from the 4.79% real growth rate in the ’80s. 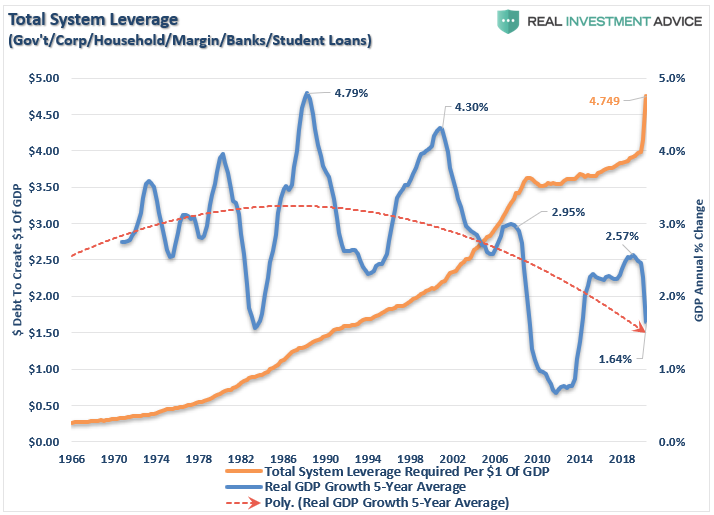 A “vaccine” for COVID-19 is entirely different than what is needed to cure the “debt problem.”

The Rotation Is Likely Short-Lived

Look back at the first chart above. Based on two-year forward earnings estimates, the Russell 2000 (small-capitalization companies) are trading at historical extremes. Compound valuation problems, with the debt problem, and the lack of actual “value,” the issue becomes more apparent.

Given the Federal Reserve’s monetary injections and suppression of interest rates, it is not surprising to see companies leveraging their balance sheets. As interest rates have plunged, corporations have hit a record issuance of debt to pay dividends and engage in other non-productive actions.

The rotation from “growth” to “value” is inevitable. With that, we agree.

Those problems can only get solved against a backdrop of devastation for the majority of investors. When there is a true reversion in leverage, debt, and valuations, the foundation for a “value rotation” will be laid.

100 Years Ago Today, This Was The World’s Most Disruptive Technology