Congress is mulling a one-week stopgap measure to avoid a government shutdown ahead of yet another funding lapse which set to kick in on Friday – while pandemic relief provisions in the CARES act, such as enhanced unemployment benefits, will expire on Dec. 26 if no deal is reached. 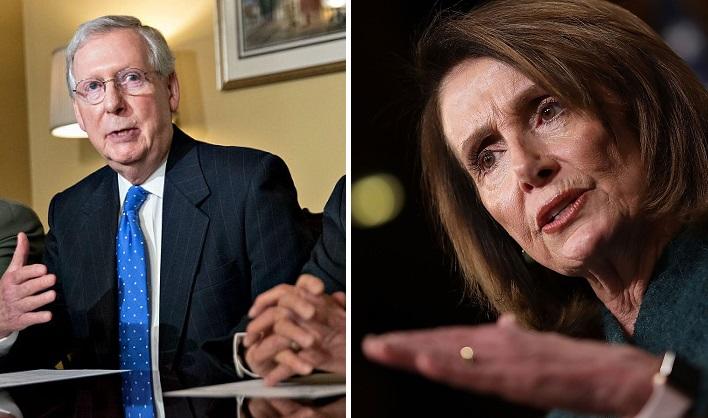 According to a House Democratic leadership aide, a one-week stopgap measure is likely as legislators hammer out a full-year spending bill which would include long-stalled coronavirus economic relief, however another Democratic aide told The Hill that it’s ‘possible but not set in stone yet.’

The acknowledgement that lawmakers may need to turn to a short-term funding patch comes despite House Democrats originally aiming to wrap up their 2020 work by the end of next week.

House Majority Leader Steny Hoyer (D-Md.) said that he had hoped to let members go home by the end of next week to give them enough time to quarantine if necessary before spending Christmas with their families. But a stopgap funding bill lasting through Dec. 18 would delay that timeline. -The Hill

Lawmakers have achieved some traction on a $908 billion bipartisan bill which includes some enhanced unemployment benefits, along with small business support and extended student loan deferrals.

Senate Majority Leader Mitch McConnell has rejected it, however, and has instead pushing a $500 billion bill which would include another round of Paycheck Protection Program (PPP) funding and liability insurance for employers. It doesn’t include enhanced federal unemployment benefits. Neither bill includes another round of stimulus checks.

If a deal isn’t reached, some 66% of Americans collecting unemployment benefits will lose them by Dec. 26, according to Morning Consult (via CNBC). Nearly 83 million adults reported in November that they had difficulties covering the basics – including food, housing, medical expenses, transportation or other bills according to the US Census Bureau’s most recent Household Pulse survey.

These are the relief measures that expire at the end of the year without another deal:

An estimated 7.3 million gig workers, freelancers and self-employed workers who don’t normally qualify for jobless benefits will lose their payments on Dec. 26, when the Pandemic Unemployment Assistance (PUA) program expires, according to a recent report from The Century Foundation, a progressive think tank.

“Without unemployment benefits and with savings badly depleted, families will be at high risk for food insecurity and loss of their homes, and many may be unable to pay for health care during some of the darkest days of the pandemic,” TCF’s report reads.

Though lawmakers have not released the text of the bipartisan bill, it does include $180 billion in unemployment insurance, including an extra $300 per week from December through March 2021. The Washington Post reported the bill is likely to include a continuation for gig and freelance workers.

Several million more workers will also lose all of their benefits when the Pandemic Unemployment Emergency Compensation (PUEC) program expires. This program extended the maximum number of weeks someone could collect benefits to 39 weeks in most places, from an average of 26 weeks.

But as coronavirus cases across the country continue to surge, the number of people who have been unemployed for more than 26 weeks continues to grow each month. Again, though the text of the bipartisan bill is not out, it is likely to include an extension of benefits into 2021.

Millions of people are at risk of being evicted if the nationwide eviction moratorium expires on Dec. 31 with no further action from states or the federal government.

The bipartisan proposal includes $25 billion in rental relief. Housing advocates have been calling for $100 billion to make up for the months of missed or late payments for millions of tenants. Additionally, the CDC or Congress would need to extend the eviction moratorium that is currently in effect.

Come January, tens of millions of borrowers will have to resume making student loan payments. Experts worry that millions will be unable to make their payments come January, and student loan servicers will be overwhelmed by the number of borrowers who need to request hardship relief at that time, like an unemployment deferment for those without a job.

The bipartisan bill allocates $4 billion to keep the payment pause going, likely at least through Biden’s inauguration in January.

Who Wins If Trump Loses?