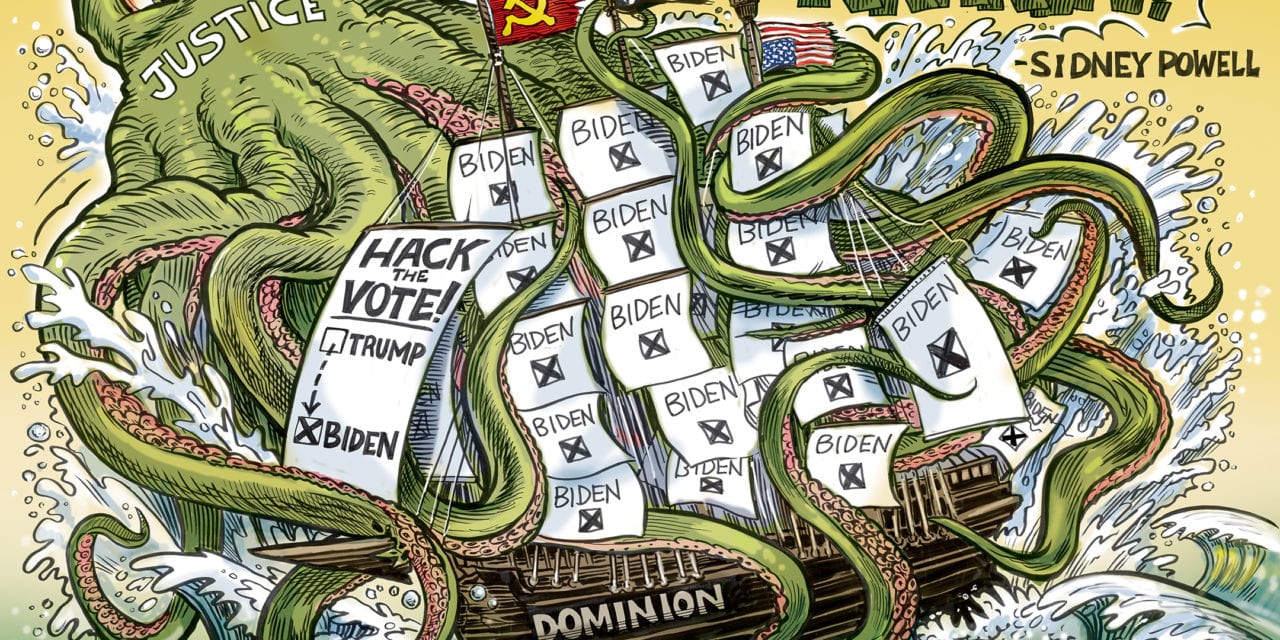 Ever since President Trump and his supporters began alleging that Joe Biden won the presidential election through fraud, the mainstream press, almost in unison, has been accusing them of subverting America’s democratic system. They say that Trump should simply accept the election results, concede the election to Biden, and congratulate him. Otherwise, they assert, allegations of fraud might cause Americans to lose faith in their much-vaunted, honest,  democratic election system.

Well, if election people are so honest, then why are there poll watchers on election day at virtually every precinct across America? Please don’t tell me that poll watchers are there only to watch for errors in counting ballots. I won’t believe you. Poll watchers from both parties are there to also make sure there is no cheating going on. That’s because cheating is always a distinct possibility in elections, not only in foreign countries but also right here in the United States.

I have previously pointed out how Lyndon Johnson stole the 1948 U.S. Senate election in Texas from popular Governor Coke Stephenson. If Johnson had not had a crony in South Texas fraudulently add 200 votes for Johnson onto the voting tallies several days after the election, Stephenson would have been elected Senator, and Johnson would never have been vice president or president. That might have meant that tens of thousands of American men would not have been sent to their meaningless deaths in a military intervention thousands of miles away from America.

So, please don’t tell me that Democrats (or Republicans) are so honest that they would never cheat when it comes to elections. Johnson cheated and it enabled him to win. Of course, at the time those who were challenging the legitimacy of LBJ’s election were accused of being something comparable to “conspiracy theorists.”

And let’s not forget how John Kennedy won the presidency in 1960. His father used Mafia friends to fraudulently win the state of Illinois, which enable JFK to defeat Vice President Richard Nixon in the 1960 presidential race.

One thing is crystal clear, however: Although these extreme anomalies cry out for careful scrutiny, you’re not going to get it from the mainstream press. From even before the election was over, the mainstream editorial writers and op-ed writers were singing in unison about “Trump’s baseless and false claims of fraud.”

I like the fact that Trump and his supporters are actively investigating the possibility of fraud by closely examining the extreme anomalies that occurred in the election. I wish the mainstream press were doing it as well.

If there was fraud, I am nonetheless skeptical that the investigators will be able come up with evidence of it in the short amount of time that is allowed, just as it was difficult to immediately prove that Johnson and Kennedy had prevailed in their elections through fraud. Sometimes election fraud isn’t proven until years or even decades have passed.

But at the very least, the efforts by Trump and his supporters help to keep things honest in future elections. If would-be cheaters know that their actions will receive blind support from the mainstream press and the electorate, they will be more likely to cheat. On the other hand, if they know that there is likely to be an army of people closely examining the election, they will be less likely to try to cheat.

The mainstream press is wrong. What damages American democracy is not a fierce examination into the possibility of election fraud. What damages American democracy is the mainstream press’s turning a blind eye to the possibility of election fraud and, at the same time, trying to pressure the American people into doing the same.

The post Fraud Asserters Perform a Valuable Service to America appeared first on The Future of Freedom Foundation.