So Far, The Bulls Are Disappointed In “Santa”

So Far, The Bulls Are Disappointed In “Santa”

Only Two-Days Left For Santa To Deliver

Today’s newsletter will be a short update as not much has changed during this holiday-shortened week.

Over the last month, we have discussed why we were positioning portfolios to participate in the traditional year-end “window dressing” rally. Such is also known as the “Santa Claus” rally.

As discussed last week in “All I Want For Christmas Is A Bull Market.”

“Whether optimism over a coming new year, holiday spending, traders on vacation, institutions squaring up their books before the holidays—or the holiday spirit—the bottom line is that bulls tend to believe in Santa Claus.” – Ryan Detrick 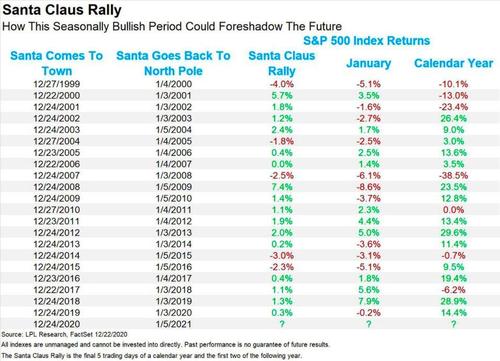 While the statistics suggested that the last week of December should have been a bullish one, it didn’t entirely turn out that way. Okay, let’s be honest, it was just a bit disappointing. Lot’s of chopping around all week and a final spurt at the close yesterday. Not exactly confidence-inspiring.

As shown in the chart below, the market closed just 0.87% higher than the previous all-time high set mid-month. However, the good news is the last high did hold as support. Such sets up the possibility for “Santa” to “deliver” on the New Year’s first two days.

Also, another bullish setup is that the short-term technical money-flow signals have gotten a bit oversold. From these levels, it would not be surprising for the market to stage a short-term rally during the first couple of weeks of January. Such was a point I made earlier this week:

We added to our $SPY longs yesterday for the remainder of the #SantaCalus rally period. With #moneyflows decently oversold, and markets holding their recent breakout highs, we may have some limited upside. #Market remain… https://t.co/VRlpZ7uifl pic.twitter.com/rxllu2aI90

It certainly seems as if there is no risk. But maybe that is the risk.

Everyone Is On The Same Side Of The Boat

Currently, every single analyst has the same story going into 2021.

You get the idea. Everyone is incredibly “bullish” about the coming year.

While that “wish list” could undoubtedly turn out to be the case, there is much that could go wrong. More importantly, there is also Bob Farrell’s truism, which is:

“When all experts agree, something else tends to happen.”

The biggest problem, of course, is the debt. If inflation does indeed rise, interest rates will also increase due to the surge in the money supply. Somewhere between 1-2% on the 10-year Treasury, the proverbial “wheels” come off the $86 Trillion debt “cart.”

With the gap between economic growth and debt at the highest levels on record, even small increases in debt service costs have an immediate and negative impact on growth.

While analysts may indeed get what they wish for in the first half of 2021, they may well regret it by the second half.

With literally everyone “in the pool” and leveraged, the big surprise in 2021 could very well be the unwinding of over-confidence.

What Happens After A Third 10% Year Of Gains?

While working on this week’s newsletter, I stumbled across this piece of analysis from DataTrek Research:

That’s the whole list, across almost an entire century of US equity returns. The famous bull market of the 1980s did not see 3 consecutive +10 percent years. Nor did the 1970s, when the S&P 500 rose by 78 percent over that inflationary decade. Even the post-1932 snapback from the Great Depression bottom for US stocks failed to string together 3 years in a row of +10 percent returns in the 1930s.”

Could the S&P post another year of 10% gains in 2021? As noted above, this is the “consensus” view currently. Therefore, many things will need to go “right,” considering the extraordinarily high level of valuations already priced into the market.

However, the risk to investors, who are already long and leveraged, is what happens if something goes wrong? What if the vaccine rollout doesn’t happen as fast as many expect? Or, economic growth doesn’t come roaring back? What if corporate earnings don’t rebound as strongly as expected?

There are many “What if’s.”

For investors, in a grossly overbought, leveraged, extended, and bullish market, it only takes one “what if” to turn everything into “W.T.F.”

With the “Santa Claus” rally wrapping up next week, we are maintaining our long bias with reduced hedges at the moment.

We made no changes to our portfolio mix during the past week except for adding a 5% weight of SPY to our current holdings. Once we pass the end of the next week, we will most likely reduce that position and rebalance the rest of our holdings.

With the stimulus bill passed, and checks going out, we won’t be surprised to see a short-term pop in economic activity. However, given the checks are 50% smaller than the first round, along with extended unemployment benefits, the economic bump will be short-lived. The real question going into 2021 is whether President Biden can spend further into debt to do more stimulus. Or, will a shift toward fiscal responsibility begin to take hold? Much will depend on the Senate run-off outcome in Georgia.

Regardless, the evidence is mounting that economic and earnings data will likely disappoint overly optimistic projections currently. Furthermore, investors are way too confident. Historically, such has always turned out to be a poor mix for a continued bull market advance in the short-term.

We will continue to trade accordingly, but the extreme deviations in all markets from long-term fundamentals are unsustainable.

That is a problem the even the Fed can’t fix.

I wish you all a happy and prosperous New Year.