As we have been warning for quite some time – and again overnight – the (largely irrelevant) December jobs report was a bomb, with nonfarm payrolls tumbling 140k in December, well below consensus and its first decline since April, as a result of the widespread covid lockdowns at the end of 2020.

That said, the composition of the establishment survey was firmer however, with job gains in 61% of industries. Indeed, excluding the 498k drop in the virus-sensitive leisure sector, payrolls rose 358k. As Goldman notes, school closures may have also weighed on the report (public and private education -83k), and the virus-sensitive “other services” category was also soft (-22k). Elsewhere, job growth surprisingly accelerated in professional and business services (+161k), retail (+121k) and construction (+51k). Manufacturing payrolls (+38k) increased for the eighth consecutive month.

A full breakdown of who was hiring in December, and who wasn’t, is shown below. 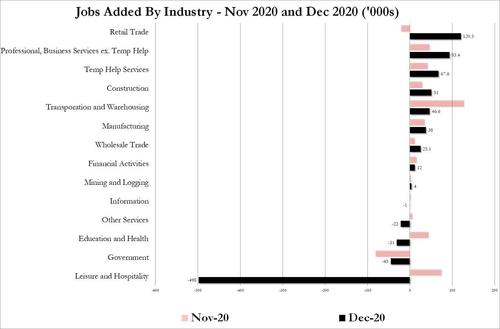 The biggest reason for the drop – food service and drinking place workers, i.e., waiters and bartenders, tumbled by a whopping 372K in December amid the widespread lockdowns. 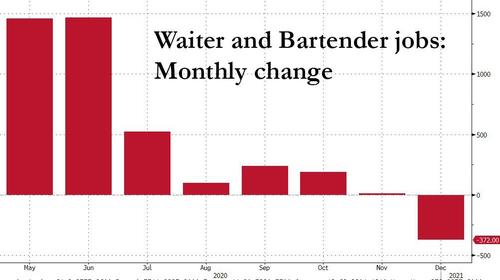 Finally, courtesy of Bloomberg, below are the industries with the highest and lowest rates of employment growth for the most recent month. Additionally, monthly growth rates are shown for the prior year.